CAPE TOWN, South Africa, Dec 30 2010 (IPS) - Just before sunrise 39-year -old Alan Simons, an emerging small-scale farmer, gets ready for his usual nine-hour day of harvesting, packing and deliveries. In his black Nissan van he drives ten kilometres to the seaside town of Strand outside of Cape Town to pick up his six workers, all of who are women. 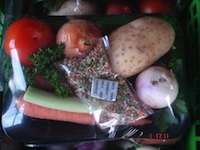 From there they travel to Simons’ half a hectare farm in Somerset West, which he leases from a private farmer. The crew makes an early start for harvest time, which begins at six in the morning.

Like other small scale farmers in South Africa, Simons is faced with several challenges. Standing on a strip of a 65-hectare piece of farmland leased by 13 small-scale farmers, Simons spoke about the numerous obstacles he and his colleagues faced.

Simons, who had previously worked as an assistant manager for a big commercial farmer for 14 years, has been farming for six years. He is fully aware of what small farmers need to survive and to be competitive.

“Small farmers need substantial infrastructure to be competitive. If not, we can’t deliver according to our clients’ needs,” said Simons. “Big farmers kill you, they flood the market,” he added.

“As always, bigger farmers have an advantage over smaller farmers because smaller farmers face bigger obstacles to getting into the market,” said Chair of the Department of Agricultural Economics at the University of Stellenbosch, Professor Nick Vink.

“Geographically they are mostly further away from the market, infrastructure is often geared to working with large quantities of produce, the transaction costs of working with small amounts of product are higher, and last but not least they get no support from the state,” said Vink.

Alvyn Jeptha is a 31-year-old emerging small-scale farmer who does hydroponic farming – where plants are grown without soil but rather in a nutrient solution in a greenhouse. Jeptha farms in Stellenbosch, a viticultural hotspot in the Cape Winelands. He has several greenhouses; one of them is a 1780 square metre one in which he grows tomatoes, green beans and green peppers.

A greenhouse like this can cost a farmer about R650 000 to build. Through hydroponic farming, Jeptha gets extended crop cycles and is able to get a greater yield than his colleagues. “You can use the height of the plants to your advantage,” said Jeptha as he walked through the numerous rows of tomato plants, which can grow up to 14m long.

One of the most important pieces of infrastructure required to maintain a competitive edge is the cold chain infrastructure. “One of the major obstacles (for small farmers) is not having a cold chain,” said Jeptha, who has been farming for eight years.

All big commercial farmers have cold chain infrastructure, which is too expensive for small farmers to purchase, and which allows big farmers to extend the shelf life of their produce.

Being compliant with GLOBALG.A.P. (Good Agricultural Practice) standards are a necessary but costly requirement. GLOBALG.A.P establishes international standards around food safety for the certification of agricultural produce and requires that food producers be inspected regularly.

Being compliant also means that farmers will have to be audited by Pick n Pay a few times a year. “You need to be compliant with the standards but you need money for this. You need to employ people for record-keeping, for item tracing, and to check the quality of your food,” said Jeptha.

Gaining a strong foothold in the market also means that you will need to be able to keep up with suppliers’ demands for a continuous high volume supply of vegetables – which small farmers usually cannot do. In order to make up for his small volume of produce, Simons and other small farmers are sometimes forced to buy from other farmers. “Pick n Pay requires tons of produce a day. I only produce 300 kilos a day,” said Jeptha.

Large retailers are less likely to invest in farmers who can only produce a small amount of produce a day. “Retailers are not going to travel a long distance just to get a small amount of carrots,” said Ian Gilfillian, a director of Ethical Co-op, a Cape Town based online organic market that assists small farmers by buying and selling their produce.

But Kevin Korb, commercial director of Pick n Pay, one of South Africa’s largest retailers, said Pick n Pay’s suppliers include the very small as well. “It is part of Pick n Pay’s philosophy to support small-scale vendors,” he said. But only a small percentage of Pick n Pay’s goods – roughly five percent – are purchased from the fresh produce market where small farmers sell their produce.

So how do small farmers cope? “Marketing holds the key to making profits”, said Jeptha. “You need to have contracts and a proper market. Your produce should be sold before you plant them. You must know where you are going to deliver it before you plant that seed,” he said. Farming short cycle crops is also key.

Simons farms green beans, baby marrows and gem squash – crops that can be harvested within eight weeks. Small farmers don’t venture into fruit farming. It can take up to three years for fruit trees to bear fruit, a major risk for the emerging small farmer who has little start up cash.

To help overcome these obstacles, Simons and Jeptha have decided to form their own small farmers co-operative along with Jeptha’s parents, Christine and Melvyn Jeptha, who are both organic farmers.

By forming a co-op, they hope to cut out the middleman – the agent at the market. In this way it would be more affordable to purchase a cold chain and get bigger volumes on a continuous basis – two aspects, which will help small farmers, get a strong foothold into the market.