CAPE TOWN, Jan 28 2011 (IPS) - Noncedo Pulana lacks many things, but she is certainly not short of confidence as she prepares to stand for election as Khayelitsha ward councillor. She feels her long years as an activist in the sprawling township have prepared her to do a better job. 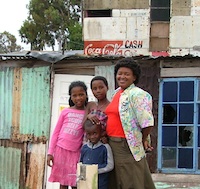 Noncedo Pulana and her children in Khayelitsha Credit: Erna Curry/IPS

Khayelitsha is reputed to be the largest township in South Africa. Created in 1985 to accommodate an influx of black labour to Cape Town, in 20 years its population grew beyond 400,000. Seventy percent of residents still live in shacks of wood and corrugated metal; one in three must walk 200 metres or more to the nearest public water point.

Pulana can often be found at a communal house in the township that she calls “the 5-Star”, a joking reference to the way the small structure seems to accommodate all who need it. She spends hours here meeting with, educating and politicising young people she refers to as her spiritual children.

Three-quarters of Khayelitsha’s population is under the age of 35. A quarter of these youth are HIV positive. Yozi, from the Site C section of the township, is one of them.

In 1994, the ruling ANC adopted a 30 percent quota for women's representation at all levels of government ; ahead of the last local elections in 2006, the party set itself a target of gender parity, provoking some resistance from male councillors who feared losing their places in the party lists.

South Africa's local government is made up of both directly elected councillors and others voted in from a party list under a proportional representation system. The ANC's quota system boosted the total proportion of women representing the party at local level to 40 percent.

This increased percentage of woman in local government councils has not necessarily translated into a significant difference in how councils function.

"Here in this area, I will speak about this Ward 89, in terms of gender balance its not balanced at all," says Noncedo Pulana, who is standing for election for a rival party, the Democratic Alliance. "The people who are in leadership for instance, its men. And even the women who are in leadership, who has the final say? its the man! Its only me who is vocal thats why I took up the stand of being a councillor, and I am ready to be the councillor of the Democratic Alliance."

Pulana was attracted to her new party - and prior to that, to the Independent Democrats, which is now allied with the DA - in part because both parties have a woman in their top position. Interestingly, neither party has opted for formal quotas for women's representation.


He says people seeking healthcare have to wait outside clinics from 4 a.m. if they want to be sure to see one of the overworked doctors. People are often told there is a shortage of various medicines.

Yet ward councillors are not visible on health committees in the community.

“If the ward councillors could take the lead in one of these challenges, being open, taking part, taking a lead by saying I am going to test [for HIV] publicly…” Yozi says.

“I want all of us to know our HIV status, but not just that: I’m also saying that due to the lack of employment that leads to this brutality that we have seen. You don’t see (the ward councillors) leading such campaigns and attending such meetings and raising these issues publicly, opening up for community members to engage and to discuss.”

“What made me eager to become a councillor is that I saw myself that this work that I am doing it was supposed to be done by a councillor,” she says.

Coming to the party

She is standing for election as a candidate for the DA, the Democratic Alliance party. It’s a complicated choice for a community activist from this black African township where the ruling African National Congress (ANC) has dominated every election since 1994. The DA has so far drawn its support mostly from white and coloured voters, though it gained some seats in predominantly black areas in the most recent vote.

Pulana says she grew disillusioned with the ANC several years ago, when she could not gain recognition as a leader, as a person with something to say in her local branch. Part of the reason for her frustration, she says, was resistance to her leadership potential based on her gender.

In Khayelitsha, and similar townships across the country, the belief that councillors serve their constituents adequately has been badly eroded. The evidence lies in the thousands of protests across the country every year, demanding faster progress in providing decent housing, healthcare and jobs.

Pulana believes her history of community organising has already established a level of trust between her and her community. “The reason I can say so is that they know Noncedo. Noncedo is always there for the people.”

Is elected office the answer?

Eleanor Hoedemaker is a community activist from Zille-Raine Heights, an informal settlement in another part of the city. She knows Pulana well, but she rejects the idea of running for ward councillor as an effective means to work for change.

“You can’t trust any of them (politicians)… male or female! We’ve been approached already to join political parties but we said we do not want to lose our identity, like other people who were activists and went into parliament. So rather not. Rather stay an activist, and lets not get involved in politics.”

Will Pulana retain her commitment to securing the basic needs of her community should she be elected?

There is little support from South Africa’s political parties specifically to help women strengthen their influence as elected officials or within party structures.

Pulana has developed leadership skills in the course of her community work and with training by organisations such as the child health and rights group Children’s Resource Centre and as part of a project called Building Women’s Activism, run by a Cape Town NGO, the International Labour Research and Information Group.

She herself has no fears on this score.

“If the men were doing it right, we would not have to waste our time and do it. We saw there is this gap, and we had to jump it, uyabo (you see?)”

But first she has to win an election.