WINDHOEK, Feb 16 2011 (IPS) - A universal income grant in Namibia would alleviate poverty in one of the most unequal societies on earth, say campaigners. Free handouts only lead to laziness, responds an unwilling government. 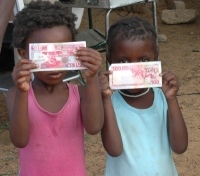 In Otjivero, a small settlement some 100 kilometres outside the Namibian capital, a coalition of civil society groups moved to settle the argument: a pilot project demonstrating the Basic Income Grant (BIG) has made a real difference.

With private funding, all inhabitants of the dusty village – over 900 people under 60 – were registered to receive 100 Namibian dollars – $13 U.S. – per month for a period of two years. The thought behind the universal grant is that a minimum income gives people the opportunity to escape the poverty trap.

And poor Otjivero was a trap. Situated at a crossing of roads, the settlement had attracted a steady flow of evictees from surrounding white-owned farms since independence in 1990. Unemployment, crime, alcoholism and prostitution were rife. Parents had no money for school fees and the sick were often unable to pay modest fees at the clinic.

The results of the pilot have been eye-opening. “Malnutrition has dropped from 42 percent to 10 percent,” explained Lutheran bishop Zephania Kameeta, chair of the BIG Coalition.

"Namibia is the junket of inequality," said visiting Brazilian senator Eduardo Suplicy at a confrerence on social protection recently in Namibia.

Suplicy campaigns internationally for income grants for the poor. He explained how Brazil, still among the most unequal societies in the world, started to win the fight against absolute poverty by introducing the Bolsa Família, a means-tested and conditional income grant.

"It freed people from an existence in narco-trafficking or slavery. A grant is a common-sense solution that brings dignity and freedom for all."

Bolsa Família was so successful that the Lula administration passed a law to introduce a BIG for all of Brazil’s nearly 200 million inhabitants, which will be implemented when state finances allow.

Campaigners hope the same will happen in Namibia. Though the pilot in Otjivero ended in December 2009, the original recipients still receive the equivalent of 11 dollars each month. This will continue till December 2011 and beyond funding permitting.

By that time the government could have implemented a nationwide Big Income Grant if the political will can be mustered.

"There is really no alternative," says Claudia Haarmann of the BIG Coalition. "The situation in the country has only deteriorated since the start of the pilot project three years ago. More and more we see workers, the youth and politicians speaking out in favour of an income grant."

The grant - which would be universal to reduce bureaucracy and avoid stigma - would cost an estimated 190 million dollars a year, or 5.7 percent of the budget.

Its civil society supporters propose that it would be financed through income tax reforms, or by taxing the mining and tourism industry.

Senator Suplicy gave the example of Alaska, where a small fishing town council put a modest tax on fish exports to build a grant fund. "This grew into a state-wide income grant based on dividends from the exploitation of national resources."

Another alternative, says Haarmann, would be using money from Namibia’s Development Budget. The Namibian government plans to spend 620 million dollars on the development budget in 2010/2011, an increase of more than half from 2008/2009. This budget is notoriously underspent, with as much as 40 percent rolling over from one year to the next.


Unemployment fell by a quarter, while crime reduced by almost half, says Kameeta. The school dropout rate is almost zero, many more patients are able to pay for care at the clinic, and self-employment has tripled. “A poor desperate village has been transformed into a place where people can buy clothes and send their kids to school.”

But the evident success did not persuade government to implement a BIG nationwide, with President Hifikepunye Pohamba stating the grant would only make people lazy.

This remark was ill-received in a country that has topped the list of most unequal societies for many years. When the leadership of the National Union of Namibian Workers (NUNW) last year toed the ruling party line and withdrew from the BIG Coalition, it was called back by its members, signaling broad support for the income grant.

A conference on “Social Justice and the Responsibility of the State”, organised in Windhoek from Feb. 10-11, maintained pressure on the government to implement the measure.

“I sit on the corner of the street every day waiting for someone to come and ask me to clean their yard,” said Bongie /Cuïnatja.

“Namibia is a rich country, but I am scared to have a child here if I don’t know how to feed her. People cannot eat democracy, they cannot feed on independence.”

A guaranteed monthly income would allow /Cuïnatja, now locked in a daily struggle for survival, to buy basic necessities and maybe start a small business.

Immanuel Kadhila, an entrepreneur, testified that he saw the BIG as a way to make money.

“As soon as we heard of the initiative, my cousin and I went to Otjivero and opened a small grocery shop. Yes, we were being opportunists, but [goods in] the shop sold so well that it was empty most of the time. This shows it’s not true that people will simply spend their money on alcohol. If a BIG is introduced elsewhere it will create employment, because people will open shops,” he said.

“The income grant I get every month makes it possible to pay school fees and buy uniforms. All my children passed last year,” says Otjivero resident Bertha Hamases.

“I can also pay the bill at the clinic so the nurses don’t confiscate my clinic card any more. With money from the grant I advertised in the newspaper and found a job. With the money from the job I buy shoes and clothes and make another profit selling them. I have managed to extend the one room shack the five of us lived in into a 3 room house,” the 32-year-old mother of four told IPS.

“The BIG is an efficient and fair measure to establish a just society,” said Kameeta. Referring to the two decades since independence he added: “Peace is not the absence of war. War ended in 1990, but how can a person with no house and sleeping in a riverbed have peace? Rejecting the discussion on what has become an international movement is making yourself poor.”

It’s unlikely a universal grant will be on the government’s budget later this month. But proponents say there are ways to finance a BIG if the political will was there. “The money from the mines and tourism should directly benefit the people, it should be transferred into their bank accounts. This money will stay here, circulate and make us more competitive,” said Kameeta.

“We cannot just nationalise the mines, or grab the land to finance such a system,” cautioned Trade Minister Hage Geingob. Geingob is a fervent supporter of the BIG despite the prevailing scepticism in government. “But we can ask where the private sector in all this is? Can’t the mines contribute to a fund that gives grants to the needy?”

“If you know I am hungry today then feed me today,” said another activist, lamenting the slow pace of decision-making.

“You don’t go debate my hunger in parliament for five years, or insist on experiments with ‘randomised control’ groups. You cannot gamble with someone’s life like that. Where are the ‘randomised control groups’ when it comes to black economic empowerment deals?”