KAMPALA, Apr 1 2011 (IPS) - Clementine Auma was still living in a displaced person’s camp in Gulu district when she acquired the treasure she’s gone into the house to fetch. She re-emerges from her home with a white box in her arms: a solar oven. 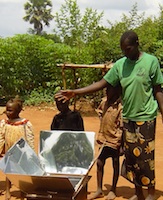 Women get a first look at a Sun Oven in northern Uganda. Credit: Wambi Michael/IPS

She opens the box to pull out the oven, which she quickly assembles, folding out four aluminium reflectors from a black box fitted with glass. The 65-year-old Auma squints at the sky, then positions the oven to best direct the sun’s rays on a pot to boil water for tea.

“You have to make sure that you see the shadow of the oven while facing the sun, so you have positioned it well to trap the sun,” she says.

Auma is one of a small handful to receive a Sun Oven during a pilot project in southwestern and northern Uganda, testing them before manufacture and sale nationwide.

“It is very good,” she says of her oven,” because you can boil tea even while you are digging in the garden.

Her oven is a box roughly 50 x 50 centimetres, and 30 centimetres deep. Its outer shell is made of plastic, lined with insulation to keep heat in, and then an inner shell of anodised aluminium and a clever swinging shelf that both allows the hot air in the cooking chamber to circulate all around the pot and automatically levels the base of the oven, which should be tilted towards the sun using an adjustable leg built into the back of the box.

The cooking chamber – matt black to better convert the sun’s rays into heat – is covered with tempered glass to keep the hot air in: the Sun Oven, say its manufacturers, reaches temperatures comparable to a standard oven. The whole ensemble weighs 9.5 kilos.

Margaret Sempijja, says these ovens can be used to cook almost any kind of food, as long as the chef knows how to mix it before putting it in. “Some people don’t know that posho [a staple meal of ground maize] can be prepared in this oven. But posho which is prepared in this oven is wonderful,” she smiles.

Another woman with experience using the solar oven, Saida Matovu, says she has found it both convenient and efficient, but she complains that the pot is very small if one has a large family to feed – and of course the whole apparatus is useless on rainy days.

A larger version of the solar oven is also available, big enough to serve in institutional settings such as a school or an orphanage.

Over 90 percent of Uganda’s population relies on biomass – usually wood – for cooking and heating in rural and urban areas alike. Studies by the United Nation Development Programme (UNDP) indicate that firewood and charcoal contribute 88 and 6 percent to the country’s total energy consumption, respectively. Electricity and hydrocarbons account for the remainder.

Prince Ronald Mutebi first saw a Sun Oven at a Rotarians’ conference in a Chicago hotel seven years ago and immediately thought that it could be a useful tool to both slow deforestation from harvesting firewood and protect the health of Ugandan women suffering from respiratory diseases linked to long hours spent cooking over a smoky wood fire.

Mutebi, now the Executive Director of Sun Oven Uganda Tek Consult Group, partnered with U.S.-based Sun Oven International to import the stoves which he has since field tested in rural areas. He now plans to set up a manufacturing plant that will distribute the sun stoves across East Africa.

“I knew about the technology but I had never seen the technology this effective. And when I saw it at the conference in my mind I said Ugandan sits just at the equator so we have the abundant sun. So if it works elsewhere, then it will work in Uganda,” Mutebi told IPS in an interview.

He explained that the oven is so well insulated that it can keep food warm for up to four hours, as long as the cooking chamber is not opened.

“It is culturally sensitive: you can cook dinner at 5:00 p.m. and not serve it until later in the night. So it can work in most communities where dinner is normally served in the night [long after the sun has set].”

These ovens were developed in the mid 1980s by Tom Burns, a retired restaurant owner in the United States and long-term member of Rotary International, who set out to make a durable and inexpensive solar oven. Rugged and rust-proof thanks to the use of aluminium, the ovens, according to Mutebi, should have a a fifteen-year lifespan.

Mutebi says the oven will initially be sold in Uganda for the equivalent of 170 dollars, but that price could go down once mass production starts. “Still that cost is high for an average Ugandan. So we’re planning to create sort of a hire-purchase scheme for the ovens, whereby people can pay in installments,” he said.

Several development groups in Uganda have seen the Sun Oven as an opportunity to bring change in communities. The Nyanya-Kentale Kukama Butonde Group, a local environmental group based in Rakai district in southwestern Uganda is promoting it.

David Sentongo, the group’s chair, told IPS that demand for the ovens is steadily increasing as the communities come to know about its benefits.

“We got fifteen ovens which we distributed to a first group of our members. Out of the fifteen, we gave two to some people in the communities who are not our members, just to show those Sun Ovens are for everyone,” he said.

He wants the group to acquire an industrial-size unit that could be used as a community oven for baking.

Mutebi said Sun Oven Uganda already has the components to assemble 365 solar ovens in the country; he hopes to put them together and on the market before the end of the year.

He told IPS that price remains the biggest obstacle to the ovens rapidly gaining a foothold. Relatively few households will have that much money to put down, but high interest rates for consumer loans make arranging financing a difficult challenge.

Back in Gulu district, Clementine Auma is reluctant to lend her precious oven to anyone, despite its portability. “Some people come to borrow it to make bread, but my fear is that it could get damaged.”

Back into her thatched-roof house it disappears: a valuable tool to protect health and the environment. And to make marvelous, flavourful posho.