NAIROBI, Jun 22 2011 (IPS) - People in Western Kenya are now able to buy effective anti-malarial drugs at low prices thanks to the success of the Global Fund’s subsidy programme, and thanks to honest pharmacists who are reselling the drugs at the recommended low prices. 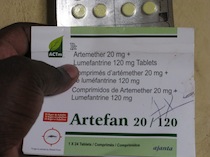 The program by the Global Fund to subsidise the cost of the most effective anti-malarial drugs in least developed countries has recorded early success in Western Kenya, 10 months after introduction.

Early findings from a survey conducted by the Kenyan government show that 80 percent of pharmacies in Nyanza Province in Western Kenya have stocked the subsidised drugs. The study is yet to be released but it also found that most locals have taken advantage of the subsidy to access the highly effective medicine. Unsubsidised, the drugs cost about seven dollars.

“We recorded anomalies in prices, where some pharmacists were selling the subsidised drugs slightly higher than the recommended price of 40 Kenyan Shillings (Ksh) (50 cents), but most of the prices were within affordable limits,” says Dr Elizabeth Juma, the managing director for the Division of Malaria Control in Kenya.

Artemisinin Combination Therapy (ACT) is subsidised through the Affordable Medicine Facility – malaria (AMFm) programme, which is hosted and managed by the Global Fund. The Fund is an international financing institution that invests in the fight against HIV/Aids, tuberculosis and malaria.

According to Juma, the Division of Malaria Control partnered with the Pharmacy and Poisons Board to conduct a survey covering 270 private pharmacies in all districts within Nyanza Province (a malaria endemic zone) during March.

“We found out that all the surveyed pharmacies had stocked the recommended ACT drugs for malaria, while 80 percent (216) had the subsidised ACTs,” says Juma. “The mode and median price was Ksh 40 (50 cents) while the average price was Ksh 49 (above 50 cents). In only one pharmacy did we find the subsidised drugs being sold at more than Ksh 100 (2.50 dollars),” adds Juma.

It is a significant success in a country where 25 million of the 34 million Kenyans are at risk of contracting malaria.

And the slight overpricing of the ACTs did not seem to have a huge impact on those in need of the drugs. “The average of Ksh 49 was found to be far better than Ksh 600 (7.50 dollars) people were paying for the same (unsubsidised) dose,” she says.

Dr Olusoji Adeyi, the director of AMFm in Geneva, echoes her sentiments. Adeyi was optimistic that prices of the subsidised drugs will eventually drop with time.

“When the AMFm started, the government of Kenya set a recommended retail price of Ksh 40 (about 50 cents) for AMFm co-paid ACTs. In our understanding, this was set as a desirable target, not a decree, because the AMFm in the private sector works through markets. Yet with the ongoing public information campaigns to make both buyers and sellers aware of these recommended prices, the cost of ACT will soon go down,” Adeyi tells IPS.

There is no legislation of price control in Kenya, hence shopkeepers, including pharmacists, usually decide on what price to mark the subsidised ACTs, despite government’s price recommendation.

However, Josephine Akinyi, a resident of Kisumu city in Nyanza Province appreciates the fact that the subsidised drugs are available despite anomalies in the prices. “Though I am aware of the recommended price of these drugs, I find it far easier to part with double the recommended price for a dose, which is several times cheaper than what we used to pay for the same dose of (unsubsidised) medicine,” says the mother of six.

Adeyi says that the project’s success means people will no longer be forced to buy cheaper anti- malarial drugs that are not effective.

“Nyanza province has already achieved its strategic objective of reducing the retail price of ACTs to about the same range as those of SP (Sulfadoxine-pyrimethamine–based) and amodiaquine (anti- malarial drugs that are no longer effective in treating the disease). This means that high prices will no longer force people to buy ineffective medicines. Instead they can easily buy quality-assured ACTs for about the same price or even cheaper,” he says.

Though the SP drugs, which include Fansidar and Metakelfin, are banned in treating malaria because of their ineffectiveness, many people in Kenya still buy them because they cannot afford alternative effective drugs. The banned drugs retail at about Ksh 100 (2.50 dollars).

“I receive customers on a daily basis who seek to buy Fansidar because they know it is cheaper than the (unsubsidised) ACTs. But upon realisation of the availability of the subsidised ACTs, they usually change their options and go for the highly effective alternative,” says Willis Otieno, a pharmacist in Kisumu city.

In Kenya, the AMFm program has reduced the retail price of ACTs by up to 92 percent. According to the program’s plan, the private sector is entirely responsible for all costs of distribution, storage, staff salaries and overheads. It is a strategy, Adeyi says, that has never been attempted in global health financing for malaria treatment.

He says there was a need to increase the availability of ACTs and to reduce variations in their retail prices. Adeyi says this will happen when the supply of ACTs is large enough to meet the demand everywhere.