JOHANNESBURG, Jul 13 2011 (IPS) - Domestically abused women who are financially dependent on their abusers can now report the crime with the assurance that they will be able to get financial and medical support from the state, thanks to the country’s new law on domestic violence. 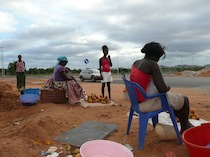 Women’s campaigners have welcomed the introduction of the new law, which was signed into the statue books on Jul. 8, and which criminalises domestic violence and offers protection to victims and their families.

Until now domestic violence had not been illegal in Angola – and on the rare occasions it reached court, it was prosecuted under rape, assault and battery laws.

The law, which was signed into the statue books on Jul. 8, guarantees support to victims, through safe houses, medical treatment and financial and legal help. In addition, violence has been designated as a “public crime”, which means anyone can report it to the police, not just the victim.

“Giving other people the right to report domestic violence also helps because victims can be ashamed of their situations and may not want to speak up about what is happening to them,” Suzana Mendes, editor of the Luanda-based private weekly newspaper Angolense and a leading member of the Angolan Forum of Women Journalists, which has lobbied extensively for the new law, said.

The fact that anyone can report domestic violence, and that victims will get financial and medical support is crucial to the new legislation’s impact, Mendes said. However, no details have been given about the amount of money that will be made available to victims.

“With domestic violence there are so many factors you need to take into consideration,” she explained.

“For many victims they are trapped and unable to report their problems because they are financially dependent on their abuser. Now, they can contact the police and know that they won’t be left vulnerable,” Mendes said.

The legislation, some 10 years in the making, articulates new definitions of domestic violence, which include withholding food from a child, failing to adequately support a pregnant woman and sexually abusing a minor or elderly person in your care.

“This is very good news. We have spent many years fighting for this legislation and it has not been easy.

“We had a big job to prove to society that the law was necessary, to explain what domestic violence was. Initially some people saw this law as being something that was un-African because it interfered with families, and others saw it as anti-men,” Mendes said.

Traditional marriages with girls under the age of 14 have also been outlawed and there are new laws around family finances, giving women more rights to inheritance and family money.

Sizaltina Cutaia, from the Angolan office of the Open Society Initiative for Southern Africa, also welcomed the legislation.

But she said it was not guaranteed that the pledges made in the law would be supported in practice.

“As a country in general we do not have very good records in terms of law enforcement and there too many examples to show that,” she told IPS.

“I think that the adoption of the law is a great starting point but there needs to be resources allocated to provide training to police officers (both male and female) as well as to educate the population, particularly women and girls, about the content of the law and the processes that one needs follow in order to report violence.”

There are no concrete statistics for levels of domestic violence in Angola, partly because until now there has been no legal definition, and any incidents that are reported have been recorded as normal assaults.

However, in one survey carried out in 2008 by the Angolan Women’s Organisation (OMA), the women’s wing of the country’s ruling party, Popular Movement for the Liberation of Angola, in just one district of Luanda, researchers counted some 4,000 incidents over 12 months – roughly 10 attacks a day.

And another study, referred to in the 2009 United States State Department Human Rights report on Angola, recorded 62 percent of women living in poor suburbs of the capital to have experienced some form of household violence.

Despite this perceived high rate of incidence, there are no formal support networks and just a handful of safe houses in the capital Luanda run by the OMA. Few women bothered to report domestic violence as they believed that prosecution was unlikely and would only complicate matters further.

Cutaia admitted domestic violence was endemic in Angola and hoped that the new legislation and an accompanying civic education programme would start to tackle that.

“When I was growing up, domestic violence was all around me and I remember a neighbour being very badly beaten and a guy standing by saying that sometimes men beat women to show them that they love them,” she recalled.

And added: “When you are a teenager and hear these statements, you believe them. And also, there is a tendency for victims to be asked what they did wrong, as if they deserved it in someway.”

A 2009 study by the South African Centre for the Study of Violence and Reconciliation (CSVR) observed that the legacy of Angola’s three-decade civil war, which only ended in 2002, had left engrained violent tendencies within its people.

Cutaia said too much of Angola’s ills were blamed on its history of conflict, but Mendes suggested the entrenched poverty the war had left behind definitely puts pressure on families.

“When you are living in a place with no water, no electricity and you have no food, life is very hard,” she said.

“Many families are living in poor and cramped conditions and with little space to relax and this can make life very hard and make people start to be angry.”

While celebrating the new legislation, Mendes agrees with Cutaia that it is only the beginning.

“Now we have the law,” she said. “But it is only the first step. We need the media and civil society to make a big campaign to tell people about it and explain to people about their rights.

“It’s important this happens countrywide and that any publicity material is translated into all languages, not just Portuguese, to make sure we reach all communities, not just those people in the urban centres, but the people in rural villages too.”

Angola’s minister for women and family promotion, Genoveva Lino, who has led the fight to criminalise domestic violence for a number of years, described the new legislation as a “victory for all Angolans” that would “help build stronger and more stable family units.”