NAIROBI, Jul 4 2011 (IPS) - One person dies weekly in Kenya due to a shortage of anaesthetics and the situation is worse in slums and rural areas across the country. 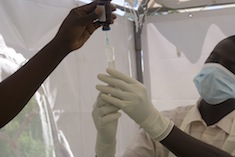 In areas like Turkana in the Rift Valley, and the North Eastern, Eastern and Western provinces people are enduring painful operations without any anaesthetics at all. This is according to James Kamau, a civil society activist and the chief executive of the Kenya Treatment Access Movement, a local non- governmental organisation.

Kamau says anaesthetics are only found in Nairobi and provincial hospitals. “In our visits across Kenya, we have witnessed cases where many health facilities operate on people without using anaesthetics. Surely, we shouldn’t be letting (people), and particularly our children, undergo surgery without the use of anaesthetics?” he asks.

Dr. Frasia Karua of Gertrude Children’s Hospital agrees. She says she has carried out clinical research around the country and found out that the shortage of anaesthetics is real and rampant in rural areas. Dr. Japheth Akwabi, the vice chairman of the Clinical Association of Kenya, who works at the Western General Provincial hospital, adds “many patients are operated on without these essential drugs.”

Both experts and civil society say that an insufficient health budget, corruption and bureaucracy are to blame for this.

Dr. Willis Akhwale, the head of disease control at the public health ministry, is calling on African-based pharmaceutical manufacturers to play a greater role in the global drug market.

“Having drugs manufactured locally will not only reduce costs, but also ease the time used to procure such drugs to treat all ailments,” he says.

Akhwale says Kenya has many instances of drug shortages, apparently due to the tedious procurement process. “It is a shame that many citizens die due to lack of basic drugs like anaesthetics, which are used during surgical procedures,” he says.

The Kenya Medical Supplies Agency (KEMSA), a government parastatal, is charged with planning, procuring and distributing drugs to all public health facilities in Kenya. But it says it does not have enough money to procure all drugs needed in the country.

But he adds KEMSA has bought a planning system worth 1.5 million dollars to improve procurement of essential medicines and medical commodities. It will also aid in tracking the storage and distribution of all pharmaceuticals and non-pharmaceuticals commodities to over 4,000 facilities in the country. But this will only be implemented in September.

Professor Anyang Nyongo, the medical services minister says government is aware of the situation and is looking for money from donors to buy enough drugs, including anaesthetics.

When Clare Anyango from Western Kenya broke her hand she was taken to a local nursing home for surgery and was operated on without anaesthetics.

“It was like hell. I was enduring the pain and thought the doctor would ease it. But when he started the operation, the pain doubled and I had to endure it for almost an hour. I wouldn’t undergo a similar exercise again,” says Anyango.

Dr. Gilchrist Lokoer, who is in charge of Turkana District Hospital, says the situation is worst in Turkana.

“Many patients come to us for surgery but in most cases, we lack the anaesthetic machines, gas and sprays to numb their senses.

“For simple processes sutures, removing lumps or circumcision, we do them when patients are fully awake. For more serious cases, we refer them to mission or general provincial hospitals with good facilities and drugs,” says Lokoer.

Dr. Loise Mutai, a paediatric cardiologist and lecturer at the University of Nairobi operated on a child in Kericho, 300 kilometres west of Nairobi, without the use of anaesthesia in March.

“I had gone to Kericho district hospital to diagnose children’s heart problems using my echo machine. I detected an abnormality in a child’s heart, which could not last a day.

“I was shocked to find there were no drugs and equipment for anaesthesia. Using my echo machine, I expertly operated on the child without using anaesthesia. The child survived but I empathised with the patient because I know the pain she was going through. We should equip our hospitals to avoid similar situations,” she says. Anna Wangeci, who lives in Mathare slum in Nairobi, says she experienced a rupture while delivering her baby and needed stitches.

“It was at night and the doctor stitched me while I was awake. The pain was unbearable given that it was just a few minutes after I had delivered,” she recalls.

Dr. Wilberforce Wanyanga from the United Nations Industrial Development Organisation is calling on African governments to offer incentives for local pharmaceuticals like allowing them to import goods without paying value added tax.

“Kenya is a regional pharmaceutical hub and it is ironical that it continues to import basic drugs for anaesthesia. It should promote local manufacturing of such drugs,” he says.