NAIROBI, Jul 11 2011 (IPS) - In Kenya buying medicine from any unregistered pharmacy outlet means that you are running a higher risk of buying either substandard or counterfeit drugs that form 30 percent of all drugs sold in the country. 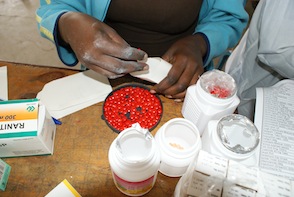 It is not easy to identify counterfeit drugs from the genuine. Credit: Isaiah Esipisu/IPS

Medicine manufacturers, government representatives and pharmacists from six countries in East Africa have observed that the region is stocked with either poor quality, or counterfeit medicine.

“The biggest challenge is that it is very difficult to identify counterfeit medicine by just looking at either the medicine or the packaging. In many cases, we have seen counterfeit medicines that have been packaged better than the original ones,” said Dr. Jayesh Pandit, the head of Pharmacovigilance at the Pharmacy and Poisons Board in Kenya.

The board is urging Kenyans, through media campaigns, to consider buying both lifestyle and life- saving drugs from only registered pharmacies and pharmacists in order to reduce the risk of buying substances that would be detrimental to their health.

“I am not saying that we should trust certified pharmacists 100 percent. But buying drugs from such outlets can reduce the risk of buying substandard or counterfeit medicine by more than 50 percent. This is because these pharmacies are routinely inspected by the Pharmacy and Poisons Board without notice,” said Pandit.

The only way to identify such pharmacies and pharmacists is by looking at the certificate, which is supposed to be hung openly. Pharmacists are also issued with green badges, which are supposed to be worn at all times, while pharmaceutical technologists are issued with blue badges.

“However, the other challenge is that unscrupulous traders are already making fake badges to deceive the public. But we have a special inspection team out there on the lookout. And so far, some culprits have already been arrested and charged in court,” said Pandit.

In one of the most memorable frauds in Kenya, a full container of counterfeit Panadol Extra tablets worth over 62,000 dollars was impounded three years ago. (Panadol Extra is a painkiller manufactured by GlaxoSmithKline pharmaceuticals). When the tablets were examined by the Kenya Medical Research Institute, they were found to contain chalk with no active ingredients whatsoever.

Some counterfeit products are found to have too many active ingredients – subjecting the end user to an overdose. While others have little or no active ingredient – subjecting the patient to under-dose. Others are found to contain potentially lethal substances including pesticides, heavy metals, chalk, leaded highway paint, printer ink and arsenic.

According to Steve Allen of Pfizer – the world’s largest pharmaceutical company – a huge number of counterfeit medicines are still in the market. Some of these counterfeit medicines are in the genuine supply chain, in many cases without the knowledge of the suppliers and retailers. “Fake medicine can, and does cause serious harm to patients, which can sometimes lead to death,” said Allen, the company’s Senior Director for Global Security for Europe, Middle East and Africa.

Between 2004 and 2010, authorities all over the world seized 65 million doses of counterfeit Pfizer medicines. However, Pfizer estimates this is just one third of what is already on the market.

“This is just a tip of the iceberg. We need concerted effort to stem out the vice which is not only affecting Africa, but also the developed world,” added Allen. In order to do this, Kenya’s legal framework needs to be addressed.

“The laws that we have at the moment are either outdated, or are not being implemented,” said Pandit.

He points to Kenya’s current law, which provides guidelines to govern the Pharmacy and Poisons Board in the country.

“This legislation was put in place in 1957. And since then, many things have changed, hence, it must be redressed in order to make sense in the present world,” he said.

“The only way to fight against the vise at the moment is through collaboration with all the players starting from end users of the drugs, to all manufacturers, distributors, regulatory authorities, customs, and police among others,” Pandit said.

The Kenyan Pharmacy and Poisons Board wants people to report counterfeit or substandard medicine.

“We have developed a ‘simple to understand’ form in simple English to be used for reporting substandard and poor quality medicine. It is available in PDF form on our website for anybody to print, and at all public health facilities for people to pick and fill, and present to nearby provincial pharmacists, or e-mailed directly to the board,” said Pandit.

The form requires the complainant to report any anomalies identified with the drug. It could be the colour, ineffectiveness or suspicious packaging, among others.

Over the last two years the board has received 190 reports from the public, through which counterfeit and substandard medicines have been impounded and culprits arrested. At the same time, a number of drugs have been recalled from the market for being substandard or because they failed quality tests.

Though it is not easy to trace the origin of counterfeit medicine due to a lack of records, Pfizer officials believe that most are manufactured in China, India, Egypt and Columbia.