DAKAR, Jul 22 2011 (IPS) - Bineta Diop, director of the non-governmental organisation Femmes Africa Solidarité, is at the forefront of the fight for better protection of women in conflict zones and their integration in peace processes. 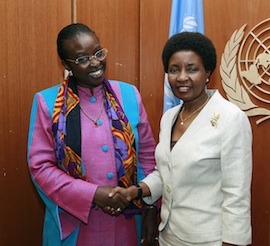 In April 2011, the U.S. magazine Time listed Diop among the 100 most influential people in the world, recognising her engagement with several initiatives for peace in Africa. Diop, who comes from Senegal, told IPS that women must challenge men in order to share political and economic power.

Q: In June, several governments from Africa, the Americas and Europe adopted an action plan to implement the Solemn Declaration on Gender Equality in Africa. How do you see this action plan being put into practice? A: The international conference in Dakar was not just another conference. It had a clear objective… The Declaration, adopted by the African Union in 2004, has already come into in force in some countries. Rwanda, for example, is actively implementing it, as is South Africa.

But if we truly want to see this decision translated into reality, what is needed is an implementation framework with measurable indicators and a budget.

Civil society, governments and the United Nations must work together around an action plan which will speed up implementation of this declaration…

The experts have done their work: now it’s for the politicians to see what needs to be done with this declaration. This was the impetus behind all of our work during the international conference in Dakar.

Q: The fight for equality between men and women is a huge project. What are the priorities, in your view? A:It is a question of ensuring that the concerns of women are taken into account in policies and programmes. I am not sure that men can usefully represent women and express their needs…

Women’s leadership has to be felt directly in decision-making mechanisms. For this to happen, women must speak about their issues themselves. This is what is at the centre of the fight for equality between men and women.

In my view, the priority is attend to the most disadvantaged women, and those who are victims of violence in conflict zones. The priority is to help those without voices to be heard.

Q: Do you think that if women enter spheres such as the army, that opportunities to better prevent and resolve conflicts will follow? A: It’s important to have women in the army… To open the army to women is ensure a role for them in human security and to open the way for solutions to insecurity and conflict. We are working on the challenges of integrating women into the army, and helping countries to draw up action plans.

We have drawn up plans to implement 1973’s U.N. Resolution 1325, which calls for women to go into the heart of military, judicial and political structures to transform them.

Q: In gender advocacy, the issue of representation of women is often raised. But does this not risk overshadowing other issues such as conditions for rural women? A: The concerns of rural women are at the heart of the fight. Rural women, it’s for them that we must act above all. They must be given the same tools as men… we must improve their access to credit, to land, to health services and protection from early marriage.

That’s what we are doing with Femmes Africa Solidarité. We work with women living in conflict countries, trying to bring these states to improve their political and economic systems. Without this, I don’t think that we can truly transform society.

Q: Despite the many declarations and protocols that have been adopted, are both conditions for women and their representation in decision-making not still weak? A: If you look at the progress made between the adoption of the Beijing Platform in 1995 and now, you will see that there have been notable advances. This cannot be denied. We cannot say that the Beijing Platform has been ignored…

And Resolution 1325 has allowed women to sit at the negotiating table at the U.N. It has enabled women to engage in dialogue with the Security Council on fundamental questions. This resolution allowed women like me to sit down with the U.N., with the Secretary General Ban Ki-moon, and speak of peace, and women’s security. Alongside Mary Robinson, the former Irish president, we have influenced the Security Council…

But there is still so much to do.

I agree that rural women continue to suffer, despite the strong performance that has seen women become more than half of the Rwandan parliament.

Certainly, steps are being taken very slowly. But women are not sitting back with their arms folded, even if economic and political power remains with men. And It is on these very questions that they must be challenged.

But we don’t do it by taking up arms. We are in the midst of challenging men to share the cake: political and economic power.