ACCRA, Aug 18 2011 (IPS) - When Andrew Poku’s mother passed away he needed help to pay for her funeral. So the 35-year-old teacher from Accra turned to one of the country’s several loan companies for a 670-dollar loan. 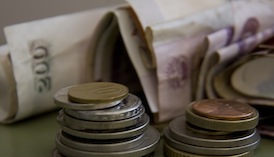 There are no laws to regulate the activities of microfinance companies in Ghana. Credit: Kristin Palitza/IPS

“l had to (apply for) a loan and l turned to one of the several loan companies that had advertised on posters all over the city.

“That was one of the biggest mistakes in life,” Poku told IPS.

He called the number advertised on a poster and met with a man from the loan agency to show him his pay slips and other documents at a local food outlet. As far as Poku knows, the loan company did not even have an office.

Within minutes everything was settled. Poku signed forms to authorise the Accountants General, where his government salary is processed, to deduct the monthly repayments.

Poku’s loan of 1,000 Ghana Cedis (670 dollars) meant he had to pay back 200 Ghana Cedis every month. Or he could opt to pay the entire sum back in one payment.

“After five months, l realised that l had paid back what l owed but I still had to pay more,” he said. It was because he was charged an exorbitant interest rate. It took him 10 months to pay back the money he owed.

But Poku’s story is a common one in the west African country where there are no laws to regulate the activities of microfinance companies. As a result they have mushroomed all over the country. Some even charge interest rates as high as 400 percent.

The only law in place that refers to microfinance companies is an old colonial law, the Money Lenders’ Ordinance, which simply requires individual moneylenders to register with the police. However, companies that loan money have to register at the Registrar General.

“We have also noticed the springing up of several companies ostensibly to provide finance to small and medium size enterprises just because there are no laws to regulate them effectively. All that such companies have to do is to simply register their companies with the Registrar General and then start operating,” said Yvonne Quansah, a director in the ministry of finance.

“After the registration, there is no legal framework to monitor the way they operate,” assistant director of the Bank of Ghana, Andrew Boye-Doe told IPS.

The Bank of Ghana has developed new guidelines under which it hopes to regulate the operations of moneylenders and loan companies.

Under the guidelines, which were issued under the Non-Bank Financial Institutions Act, the activities of individuals and companies that engage in microfinance have been categorised into four tiers. This divides the different types of loan operators according to the capital they are required to have.

The guidelines cover cooperative saving groups, locally referred to as susu companies, moneylenders and financial non-governmental organisations, which operate outside the supervision of the banking regulator. It is expected that these guidelines will take effect within six months.

“Susu companies taking deposits and making profits shall hold an initial minimum paid-up capital of not less than 67,000 dollars for one unit office; and the opening of branch(es) shall be subject to higher capital requirements,” the guideline said. This is to ensure that they have the necessary capital to back their level of operations.

Individual susu collectors, susu enterprises, individual moneylenders and moneylending enterprises will have to belong to an umbrella body.

They would, however, not have a minimum capital requirement but must contribute into an insurance fund to be set up by the umbrella body.

The guidelines do not mention the high interest rates charged by some moneylenders as authorities claim the guidelines will clean up the sector and prevent them from taking advantage of lenders.

“The situation is a complex one,” said Clara Osei-Boateng, a researcher at the Ghana Trades Union Congress who has studied the microfinance industry and the effect it has on workers in the informal sector.

She found that borrowers were not the only ones who were ripped off, but moneylenders too.

“They were instances where some of the borrowers decorated their rooms with household goods they took from others in order to impress the loan operators and then after they obtained the loans they vanished into thin air,” she said.

Osei-Boateng said the absence of regulations is the cause of the problems in the sector.

“For example, the repayment rate is not clear,” she said adding that it placed borrowers at the mercy of lenders.

“Though we found some cases of borrowers providing excellent services. The activities of many others were appalling as some workers simply have been reduced to just working to service the loans they took without knowing when they would finish paying it back because of the conditions attached to the money they borrowed,” Osei-Boateng said.

Boye-Doe said under the new guidelines no one would be allowed to operate a loan and savings business in the country without a licence from the Bank of Ghana.