LUSAKA, Aug 10 2011 (IPS) - In Zambia’s highly patriarchal society Edith Nawakwi, 52, has broken a few records on the political scene over the last two decades. And she broke another one on Sunday by being the only female candidate to file for nomination to run for president in Zambia’s upcoming elections. 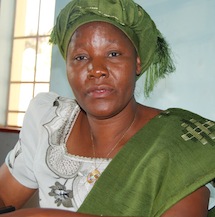 Edith Nawakwi is the only female candidate to run for president in Zambia's upcoming elections. Credit: Ephraim Nsingo/IPS

All candidates are required to file nomination papers with the country’s Supreme Court to get legal confirmation that they are standing as a presidential candidate. Come election day on Sept. 20, about 17 candidates will battle it out to lead the country. Nawakwi is well-known in Zambian politics. In 1997 she became the first woman in southern Africa to be appointed as a minister of finance. The former member of the ruling Movement for Multiparty Democracy (MMD) left it in 2001 when she and other officials opposed then President Fredrick Chiluba’s bid for a third term.

They formed the Forum for Democratic Development (FDD) and Nawakwi was elected as the party’s first vice president. In 2005 she became the first Zambian woman to lead a political party when she was elected president of the FDD.

Q: You have just filed for nomination as a presidential candidate. What was going through your mind? A: As I went to file my nomination, as I walked up to the Chief Justice, I asked myself ‘Why am I doing this?’ I was (asking) myself ‘am I equal to the task?’ But when I looked at my supporters and their excitement, it helped me appreciate the trust. I believe Zambia is ready for a woman to be president. Only a woman can bring about real change in this country.

Q: What can be done to change the mindset, the negative perception and stereotypes about women? A: Zambian women have the same rights as men, and running for political office is not an exception. When I took over as minister of finance people had all sorts of negative questions because I was a woman… I was minister of finance during one of the most difficult phases in the history of our country, but I managed to contain the situation.

I was minister of finance at a time when Zambia was at its lowest. I remember there was a day when I was required to effect payment for half a million dollars and the government did not have any money. We had to borrow from one of our commercial banks. We were trying to liberalise the economy but we had no income in the country. I was privileged to be one of those who managed to push through the structural adjustment programme.

Liberia has had the best leader (President Ellen Johnson Sirleaf) post conflict to manage that economy. And it is not just about the economy, but people’s attitudes as well. I believe that if Africa believed that one of its major assets is women, we would be much better.

Look at what is happening in Libya, Somalia and all the carnage… who is making those decisions? The motherly instinct of a woman would not allow such, as mothers our stomachs move when we see such carnage.

I believe that with women in charge, we would not be seeing most of the conflicts we are seeing in Africa today.

Q: You are the only woman who has filed for nomination as president. You are also the only female president of a political party in Zambia. Is this a sign that women are not yet ready for the challenge? A: We have to start somewhere, and this is what we have been discussing with other women. I am a product of the women’s lobby myself… in a highly patriarchal society like ours, you have to break that mind-set that women cannot do certain things. I was democratically elected as president of our party at a convention that was contested by five men and they all confirmed that I was better than them. Having broken that barrier, I see more of our (women) colleagues coming in.

Q: What is it that you are going to do differently during this campaign? A: Nothing and no one will stop me now. I believe that Zambia will only be saved by a woman and that Zambia is ready for a woman president. As soon as the men heard I was contesting, they all panicked. I will work and deliver like I delivered when I was minister of finance. The current leadership belongs to the liberation struggle era. We need leadership for the 21st century!

Our agenda when we get into government (will) be to provide a constitution that provides for the rights of all individuals, including women and persons with disabilities.

Q: In terms of policies, what are the major highlights of your manifesto? A: We are pushing for the decentralisation of political and economic power, to ensure that our people are empowered to drive development.

I am a passionate believer in the power that the country has in its people… our people’s quality of life continues to decline, yet we are one of the richest countries in the world. There is no deliberate policy to put the ordinary Zambian at the centre of any economic policy.

This is because we have an over centralised government and this has been the case since the colonial days when resource allocation was done in line with (what) had been used in Britain. This unfortunately resulted in corruption. Resource allocation is centred in the hands of a few … we need political and economic decentralisation.

If you have decentralisation, even members of parliament will now be interested in serving their people at the local level because that is where the resources will be directed. You will see that most of the world’s successful economies have been decentralised.

Q: How do you intend to make decentralisation work in Zambia? A: I think that for purposes of accountability and transparency there is a need to make sure planning is influenced from the district. We would want to have the minister of finance to come up with budgets for districts, which then coordinate the allocation of resources.