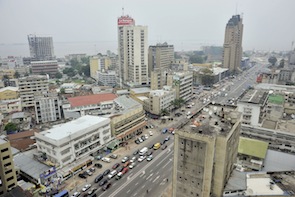 African cities are prone to feeling the effects of climate change. Credit: Einberger/argum/EED/IPS

CAPE TOWN, Nov 18 2011 (IPS) - In Africa, where urbanisation will be one of the major developments over the next few decades, it will be key for cities to figure out how to handle rapid urban expansion and much-needed economic growth, while creating more environmentally-friendly cities and reducing their carbon footprint at the same time.

Most of the world’s GDP is generated in cities, and urban centres are the powerhouses of the economy, the places from where innovation and change originates. But because of that, they also cause the most pollution and environmental damage.

“Cities are responsible for more than 75 percent of greenhouse gases, because they are the places where most people live,” said Marlene Laros, policy and strategy advisor for ICLEI South Africa, a global association of local governments committed to sustainable development.

Laros spoke at the opening of the Inspiring Change conference aimed at tackling how African cities can respond to climate change, which is being held in Cape Town, South Africa, from Nov. 18 to 20.

“By 2050, 60 percent of Africa’s population will be living in cities, up from currently 40 percent. That is a fact we cannot change. Our challenge is how to embrace urbanisation,” said Laros. She suggested this could be done by integrating climate change with development and economic policies, so that poverty, employment creation and environmental issues can be tackled at the same time rather than in isolation.

Climate change is highly interconnected with the environment, economy, politics, poverty, food security, access to water and the built environment, among other factors. If Africans want to create greener cities, they will need to consider all of them, said Laros.

One major hurdle to creating greener cities is, however, that African nations will need to double their infrastructure by 2050 to service their rapidly growing urban centres. That will mean major construction – with the construction industry being one of the biggest polluters.

“The building sector consumes 30 to 45 percent of global energy production. We use six to eight percent of global fossil fuel demand to build. Those costs are very high and very unsustainable,” warned independent environmental consultant Robert Zipplies. “We need to find different and more environmentally-friendly ways of building our cities.”

This will not be an easy plan to realise, however, since economic development continues to take precedence over the environment on a continent where poverty alleviation and employment creation are the top priorities of every government. So building parking garages has the highest commercial value in African cities like Cape Town, not creating communal spaces or parks, noted Laros.

Due to spatial planning practices and market forces that favour the wealthy, Africa’s urban poor – the majority of households – are increasingly vulnerable to the potential effects of climate change. This threatens the resilience of urban communities to climate change all over the continent.

City planners would therefore be in an ideal position to contribute to the fight against climate change, but in Africa, they have been slow to get involved. Few municipal strategies analyse and monitor hazard and vulnerability factors or contain risk assessments of the present and future effects of climate change on urban areas.

Bringing down a city’s carbon footprint would have many positive spin-offs, such as a healthier population, argued Leonie Joubert, a South African environmental writer, who has authored several books on climate change.

“African cities are spread wide and thin, which means it takes time and money to move goods. They are designed to be carbon heavy. Every calorie that comes into the city requires an ecosystem service to produce that food and transport it,” she explained.

As a result, food transported into expansive urban centres has a high carbon footprint, while generally being less fresh and highly processed. “Cities make us fat and sick,” Joubert noted. “We have an obesity epidemic in Africa, combined with severe malnutrition. And at the root of this lie significant climate problems.”

She believes one solution would be to densify African cities to create better scales of economy. “It would be easier and cheaper to introduce public transport systems, which would mean fewer cars and more people walking. Denser cities would also reduce the cost of healthy food and its carbon footprint, because it would be cheaper to transport it into town,” Joubert explained. She encouraged citizens to start demanding greener cities at the municipal level.

Climate change is not an issue for national governments to deal with alone, as its actual effects are particularly felt by people at local government level. Local governments are the closest to where the consequences of climate change will pan out and thus best positioned to build resilient cities, while avoiding major setbacks in hard-won economic and social development.

Joubert believes every African urbanite can play a role: “As an ordinary person, national government policy feels impenetrable, but on a city level, it’s so much easier to mobilise as a community.”