Africa’s Free Trade Zone: A Pie in the Sky?

CAPE TOWN, Nov 4 2011 (IPS) - African heads of state have ambitious plans to create a free trade zone, encompassing 26 countries and more than 600 million people on the continent. But economic experts warn the project is a bold step that comes with a plethora of legal, administrative and political hurdles. Others suggest the plan might be a pie in the sky. 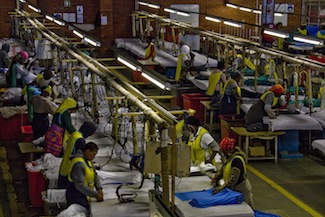 She was in conversation with South African Minister of Trade and Industry Rob Davies – one of the key advocates of the scheme – at a public debate held at the Centre for the Book in Cape Town, South Africa, on Nov. 3.

The FTA, which currently has a GDP of 650 billion dollars, will enable the duty- and quota-free movement of goods by 2014, of services and business people by 2016 and an Africa-wide economic and monetary area by 2025.

Supporters of the scheme, like Davies, hope the agreement will dramatically increase inter-regional trade and reach a GDP of 1.5 trillion dollars within the zone by 2015.

“The FTA will lead us on a new growth path that is significant in terms of job creation and industrial development,” believes Davies. He expects economic output within the zone to expand by 50 percent over the next five years, with an average annual economic growth of 5.5 percent. “Africa’s GDP per capita will expand by 30 percent,” the minister further predicted.

But trade experts like Pheko are less optimistic about the proposed economic agreement. A major concern is how countries will handle the huge amount of paperwork associated with inter-regional trade, she explained, as the FTA does not have an institutional location to handle administration.

Pheko also warned of potential legal issues, given that a number of regional trade blocs already exist in Africa, all with different rules and regulations and at different stages of integration. “Not only could those blocs slow down the building of a free trade area. All of them have struggled to take advantage of free trade agreements even on a smaller scale,” she cautioned.

Another big question will be how to integrate geo-political hotspots like Zimbabwe, Sudan, Somalia and Libya in such a trade agreement. “It remains to be seen if we will be able to negotiate the economic asymmetries on the continent,” added Pheko.

There are some obvious advantages to an African free trade area. Many African economies are so tiny they are unviable on their own. The revenues of countries like Malawi, Mozambique and Lesotho, make up less than four percent of the total SADC revenue, for example. Pooling regional markets may help take advantage of new growth opportunities. “On a regional scale, we would have sizable thrust,” argued Davies.

But will regional powerhouses like South Africa, Kenya and the Democratic Republic of Congo (DRC) be willing to prioritise regional interests over national ones?

“The elephants in the room all have hegemonic tendencies,” explained Pheko, noting that if they try to dominate trade negotiations to benefit their own national interests, while refusing to pay the adjustment costs, economic inequalities will be aggravated.

Not being able to bridge those inequalities might lead to “great tensions or even economic and social upheaval,” warned Pheko. “The FTA is not a building bloc to regional integration per se. It can pit countries against each other, such as middle-income and least developed countries.”

Davies admitted there is still a long way to go to integrate regional economies: “We need a sensible agreement that doesn’t force countries to make unrealistic choices,” he noted, acknowledging that “there will be tough negotiations when it comes to industrial development.”

He also recognised a number of challenges the free trade zone will have to face, including undiversified und underdeveloped production structures, inadequate infrastructure, prevalence of non-tariff barriers and lack of trade governance structures. Foreign investors have long noted that unsatisfactory infrastructure on the continent has been a key reason holding back investments.

“One of the greatest impediments to regional trade is transport linkages. It is often cheaper to buy products from China or Brazil than to transport them within the continent,” also warned Joanmariae Fubbs, chairperson of the portfolio committee on trade and industry at South Africa’s ruling African National Congress.

Davies said the FTA plans to address those concerns. It will boost trade by expanding the North-South corridor, which links Central Africa via Zambia with South Africa’s biggest trade port, Durban. There are also plans to further develop the Trans-Cunene-Corridor between the DRC, Angola, Namibia and South Africa. But building roads, bridges, expanding harbours, railroad networks and electricity plants are expensive, long-term projects.

For now, it remains to be seen if the 26 African nations have sufficient political will to pull this off.