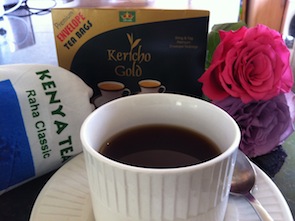 NAIROBI, Nov 24 2011 (IPS) - Kenyan tea and coffee farmers remain disgruntled about the minimal profits they make selling their cash crops, the country’s leading foreign currency earners, as the government receives millions in funding for training and subsidies that most of these farmers are yet to see materialise.

Tea and coffee brought in 850 and 133 million dollars respectively in foreign currency this year, according to the Kenya Tea Development Agency.

But funding from the World Bank to support the agricultural sector by “subsidising inputs and empowering farmers to embrace modern technologies in farming,” has not reached them according to coffee farmer Manasseh Mugo.

Due to a lack of aid effectiveness and processes that monitor and evaluate how this money is spent, Mugo and other tea and coffee farmers are unable to make significant profits selling their crops and live from hand to mouth.

“I buy all the inputs and labour needed to grow coffee. Once the coffee ripens, we harvest and sell it to the coffee factory in our region. One kilogram is now being sold at less than a dollar in Nyeri, while other regions are giving farmers slightly above a dollar for the same amount,” Stacy Njui, a coffee farmer in Nyeri, Central Kenya, told IPS. The country’s revised Coffee Act prohibits coffee farmers from selling their produce outside of the region of origin.

But another reason why these tea and coffee farmers in Kenya are unable to make huge profits is because of a lack of cohesion between policies and development at the European Union (EU). The effect is trickling down to the local level with serious implications on the ability of people in developing countries to improve their livelihood, according to a CONCORD report titled “Spotlight on EU Policy Coherence for Development“, released in November.

According to CONCORD, the European NGO confederation for relief and development, the EU should “ensure the effective implementation of human rights and greater progress towards eradicating poverty in developing countries. Poor people in developing countries are already in (a) vulnerable situation that must not be worsened by the negative impact of EU policies.”

The EU remains the world’s largest donor giving away about 71 billion dollars a year. However, there are glaring disparities between EU policies on funding and the development objectives that developing countries have purposed to achieve.

Only seven out of 164 impact assessments done by the European Commission have looked into how the EU policies impact on developing countries, according the CONCORD report.

In Kenya the impact of these policies is obvious in the tea and coffee industry. The number of farmers who have decided to turn from cash to food crops is on the rise as multination co-operations buy their coffee at throwaway prices, only to sell it at much higher rates.

Consequently, the Kenyan government continues to plead with farmers to continue growing these cash crops because, aside from horticulture, they remain this East African nation’s leading foreign exchange earners.

But coffee farmers are frustrated. The country’s revised Coffee Act restriction of where farmers can sell their produce, and the stipulation that all coffee sold in Kenya must pass through a central auction has made it difficult for these farmers to obtain the best prices for their crops.

“Coffee farmers were selling their coffee to factories outside their region who are buying the coffee at a dollar or more per kilogram.

“But since the Coffee Act criminalises selling coffee to factories outside a famer’s region, the frustrated farmers are now threatening to pour their coffee beans on the road where it will be crushed by vehicles and go to waste. It is an attempt to punish the government for not regulating the market so that farmers can receive their fair share,” Mugo said, explaining the current situation among coffee farmers in Nyeri, Central Kenya.

The CONCORD report comes days ahead of the Fourth High Level Forum on Aid Effectiveness to be held in Busan, South Korea from Nov 29 to Dec 1.

Equally significant is the fact that the 17th Conference of the Parties (COP17) to the United Nations Framework Convention on Climate Change kicks off in Durban, South Africa from Nov. 29 to Dec. 9.

“Both conferences (Busan and COP17) will ignite serious discussions around donor funding, donor relations and even more importantly, donor policies. Developing countries are living through a phase of great donor generosity despite the global economic crisis, yet, most developing countries continue to experience extreme levels of poverty,” said Dr. Peter Muga, a development research consultant in Nairobi.

Although the EU’s policies say it is committed to eradicating poverty in developing countries, the CONCORD report shows that the EU is more committed to safeguarding its own prosperity.

“The disparities are there because many EU polices are not taking into account their external impacts, such as in Africa. Even when we present evidence (such as these disparities) to European authorities they don’t act to make the change. Ultimately this is down to a lack of political will. They don’t realise that tackling global poverty is also in the EU’s interest,” CONCORD co-coordinator on Policy Coherence for Development, Blandine Bouniol, told IPS.

EU polices in areas such as agriculture affect the competiveness of local farmers in Africa. For example, EU-subsidised farm products are sold in Africa at a very low price, making local farmers unable to compete and sometimes pushing them out of business.

“Some EU policies are doing more harm than good. For example, we’re seeing massive rights violations in the developing world as European companies, fuelled by EU targets and financial incentives on offer, are grabbing land in poor countries to produce biofuels – which themselves have questionable green credentials,” said Laura Sullivan, ActionAid’s European Policy and Campaigns manager.

“This undoes the good work being done with EU aid. The EU must provide a means through which these complaints can be heard and address the unintended consequences of EU policies. Current provisions aren’t putting people’s rights ahead of European commercial interests,” Sullivan told IPS.

She said ActionAid was looking “very closely at the EU’s renewable energies policies.”

“EU countries have committed to tripling their use of biofuels by 2020 but don’t have the land needed to grow the fuel domestically – what we’re seeing is an increase in land grabbing in Africa and increased demand for biofuels is also pushing up global food prices, which hits poor communities the hardest.”