NAIROBI, Nov 10 2011 (IPS) - Deputy Chief Justice of Kenya’s Supreme Court Nancy Baraza, who made history as the first woman appointed to the post, has begun overhauling the country’s judiciary. 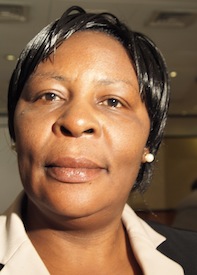 Kenya’s judicial system is often accused of corruption and ineffectiveness. It is also said to be bogged down by antiquated rules and procedures, and a shortage of personnel. This East African country of 40 million people only has 700 judges, while Canada, for example, has 2,000 judges and a population of about 34 million.

Baraza has warned judicial officers resisting reforms that they risk disciplinary action and even retrenchment.

“We shall implement radical but necessary reforms that are going to be able to bring effectiveness, fairness, eliminate corruption and instill discipline among (the judiciary’s) officers,” Baraza told IPS.

The Supreme Court is composed of Chief Justice Willy Mutunga, his deputy, Baraza, and five other judges. It was created to spearhead the implementation of the country’s new constitution, which was signed into law in 2010, and to establish an independent judiciary.

Baraza said that a staff audit will soon be conducted to determine the qualifications and competence of judicial officers and to establish the staffing needs of the judicial system.

“Radical transfers of judicial officers may be on the way to break up entrenched cartels that are frustrating changes in the judiciary. There are some officials who may want the old order to continue. But we will push for the necessary reforms to make the judiciary meet the expectations of Kenyans. Those resisting changes will have to fall by the wayside,” Baraza said.

The deputy chief justice has served as the executive director of the Kenya Human Rights Commission for many years and as the chairperson of the Federation of Women Lawyers – Kenya, which champions women’s rights.

Baraza said there was a need to clear the backlog of over one million cases in the courts in the next six months. She said the Kenyan High Court has 2,015 pending criminal appeal cases, some of which have not been heard for 20 years because files have gone missing. The Kenya High Court has jurisdiction in civil and criminal matters, interprets the country’s bill of rights and the constitution, and is an appeals court for the country’s subordinate courts.

“We must find a solution immediately and have a remedy for all the parties involved,” she said.

The judge added that since she was appointed, the judiciary has so far digitised over 60 million pages of cases from 1999 to 2010 at the High Court.

She said key to the reform agenda included establishing 14 new courts in remote parts of the country and computerising all court operations. She promised that the public would be able to access case information through SMS soon and that the Supreme Court would soon be a paperless court. In addition, High Court and Court of Appeal cases will be allocated electronically.

Vice Chairperson of the Judicial Service Commission (JSC) Professor Christine Mango said that Baraza has proved her mettle by stamping her authority to rid the judicial system of corruption. The JSC appoints the judges.

“When we shortlisted her for the post, some people made noise saying that she has a soft spot for gay (men) and lesbians and would use her position to entrench their ideals in our constitution. She has proved them wrong by upholding professional integrity and her opponents are now happy that she is steering the judiciary in the right direction without bias or favour,” Mango said.

Baraza is presently pursuing a PhD thesis at Kenyatta University on gay rights.

Also elected alongside her as the country’s only other female Supreme Court judge was Nancy Njoki Ndungu. A former member of parliament, Ndungu was also a commissioner at the Committee of Experts on Constitutional Review, which drafted Kenya’s new constitution.

But as the two women settle down in their new offices, some hope they will use the court to advance the rights of sexual minorities in Kenya.

In conservative Kenya lesbian, gay, bisexual, and transgender (LGBT) people are subjected to discrimination. The Catholic Church opposed the appointment of the two women and said: “We need people with a judicial philosophy that reflects natural law, the Kenyan religious and African cultural values, including our universal respect for life…” Baraza said her PhD thesis on the rights of gay men and lesbians in Kenya was not complete but that she had established that health services were non-existent for gays. “Those who say I’m supporting them are jumping the gun. I have gone into the unknown. I have no findings yet,” she said.

However, the Chairperson of the Gay and Lesbian Coalition of Kenya Maq Gitau said the organisation was happy with the appointment of both women as it now meant they had an avenue to address their issues.

“We have been condemned for our position in society but we are now happy that the constitution grants all of us rights,” he said. Gitau says his organisation has already met with Baraza about being recognised and they “were well received”.

Meanwhile, Ndungu said she wanted to reform the judiciary and “correct all the imbalances” in Kenya.

“My new posting is a challenge, which I believe can be surmounted if all Kenyans and all organs of government work towards a common goal; a goal to reform the judiciary, correct all the imbalances and give the people of Kenya the justice they have long fought for,” Ndungu told IPS.

“This is a tough job for us and Kenyans expect us to deliver justice in the most expeditious way. The job does not lie with us alone. It lies with all Kenyans. They should keep us on our toes, audit our performance and safeguard their constitution where all enjoy their rights,” Baraza said.