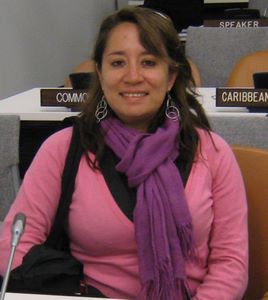 Barba, who is responsible for GRB at the U.N. Women Andean regional office based in Quito, Ecuador, discussed in this interview with IPS the gender-focused budgeting and planning processes established by three countries in the area – Bolivia, Ecuador and Peru, which are considered a model for different ways of reaching the same objective.

Peru has focused on incorporating a gender perspective in major investment projects that are a top priority for the government and that receive international development aid, in order to extend a gender focus to all public policies and to international cooperation.

Bolivia’s approach is based on grassroots, local experiences in which women have played a key role.

And Ecuador has a new constitution that requires that planning and budgeting focus on reducing inequality, partly with the help of a classification system to identify and promote gender spending.

Q: Can you explain why U.N. Women’s Andean regional office puts a high priority on GRB to promote equality, development and international cooperation? A: GRB is an extremely useful tool for the region, for states, and for public policies, because it helps you see clearly the results of development and what kind of development is being pursued. It also helps you identify the biggest inequalities, in order to find effective ways to combat them.

Gender-responsive budgeting and planning helps you think about people, because public policies, when they are analysed only from a macro viewpoint, have visions and methodologies that lead you, for example, to see all families as the same, without perceiving the differences in terms of access to work, income, and social programmes between family members.

A gender perspective makes it possible to visualise the deep inequalities between men and women, and between different people, and to gain a deeper understanding of the causes.

That helps identify the gaps and the best strategies to combat them. Gender-responsive budgeting and planning helps use resources in a more effective manner; it does not necessarily mean increasing funds but using them more efficiently.

Q: So it’s about redirecting resources to promote equality, principally gender equality? A: Yes. Many experiences around the world have shown that programmes with a gender focus bring about better results – not just social programmes, but programmes involving infrastructure like roads, or water supplies, where the impacts and results improve a great deal when a gender perspective is incorporated.

GRB requires involving women in designing programmes, in access to funding, in decision-making – or in simple questions like keeping in mind where and when meetings are held and the need for places for children to be taken care of while their parents are busy in these activities.

This is the main reason women don’t participate: because they can’t be somewhere at a specific time, or, if they can make it, they have to take their children along.

Q: What is special about the process in Peru? A: What Peru is doing is interesting in terms of effectiveness of development aid. They investigated which projects receive the largest amounts of international cooperation funds and which ones have the greatest influence on gender rights.

The programme, which has the support of the European Union, looks at how key national policies and programmes are established while strengthening national planning and budgeting systems and mechanisms, in line with international aid.

A very interesting job is being done with the Finance Ministry, Congress, the International Cooperation Agency (APCI) and the Defensoría del Pueblo (ombudsman’s office) to identify how to reform processes so that gender issues are prioritised.

Peru has a law requiring that public institutions invest in gender equality and report on how they are doing this. And the Defensoría del Pueblo monitors compliance with this, while the Finance Ministry is heading up a process with different ministries to strengthen the incorporation of a gender focus in strategic programmes and key inter-sectoral plans.

This process is aimed at getting major investment projects that are a top priority for the government and which will receive the largest share of national funds and international cooperation to adopt a gender focus so that spending on these projects will contribute to closing the gender gap.

Q: What stands out about the model followed in Ecuador? A: In Ecuador, earlier moves to incorporate gender in planning and funding were strengthened by the 2008 constitution, which stipulates that planning and budgeting must focus on closing gaps and fomenting equality.

The constitution thus strengthened the work that was being done, by requiring public institutions to make an effort to reach these national development objectives.

Q: Even the Finance Ministry established a gender equity office. A: Yes, and now that the office exists, budgeting is approached differently.

The office strengthened a budget monitoring financial tool that stipulates that all public institutions must assign resources to gender equality policies, and that the Finance Ministry is to follow up on the use and implementation of these funds.

These steps helped get other institutions to use and strengthen this tool, such as Congress, which has to study and approve the budget. The gender classification system is extremely useful for that task, because it makes it possible to carry out a specific analysis of where expenditure is going and helps lawmakers in their role of overseeing other institutions.

In addition, since this process involves public information, it helps women’s groups carry out their social oversight work.

Q: And what is the trademark of the Bolivian model? A: The process went from the local to the national levels in that country, and with a major effort by women’s organisations, the result of which was a national taskforce on GRB that includes women’s groups and women delegates of local governments.

This is an inter-institutional experience where it is mainly women who participate at the grassroots level directly in their local areas. They have taken part in training and awareness-raising processes, and have managed to influence planning by their local governments, to get them to address their demands. Grassroots-level work is the outstanding factor in the case of Bolivia.

Q: What has especially moved you about these processes? A: One of the things that really affects you is how people’s lives are changed, at a personal level. GRB really raises people’s awareness, and also provides a great deal of training.

It’s amazing how the training and GRB work make people aware of conceptions about roles and stereotypes that we all carry with us, and bring about change in people. You see it in public employees, how the way they work changes and how their relationships with their partners, their kids and their colleagues change.

It’s not an overnight change. But at least they start thinking about what they do, how they treat the people around them on a daily basis, and about discriminatory attitudes that they didn’t even notice before, due to a lack of knowledge and sensibility.

It also happens with local women, who at the beginning of the process could hardly speak in public and express what they thought, but now have no problem asking the mayor why he didn’t do what he promised.

Now they value their own knowledge, because helping to empower them on the basis of what they already know and do is more important than filling them up with new knowledge.