DURBAN, South Africa, Dec 7 2011 (IPS) - Carbon pricing will be the core mechanism to finance the Green Climate Fund and with it climate change adaptation projects in developing countries. 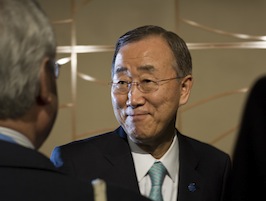 Carbon finance puts a price on emissions of carbon dioxide and other greenhouse gases.

According to Stoltenberg, putting a price on carbon emissions would have three key benefits: it will encourage industry to reduce harmful emissions (to avoid being charged for them); it will contribute to the development of clean technologies to reduce emissions; and it will generate revenue, which can be used for government purposes but also to take climate action.

There are already a number of countries that have shown that carbon trading systems or taxes can help reducing emissions while promoting economic growth, said Stoltenberg: “The European Union has a comprehensive carbon trading system through an emission scheme. Australia just introduced a carbon tax. China is introducing carbon pricing, and South Africa also wants to develop a carbon tax.”

It was therefore plausible that carbon pricing could assist in providing urgently needed finance for the GCF as well.

“The beauty of carbon pricing is that you will get less pollution but more finance,” Stoltenberg added.

During the past 10 days of the 17th Conference of Parties, which currently takes place in Durban, South Africa, the question on how to generate funding for the GCF has taken centre stage. The global economic crisis and national austerity measures have reduced the willingness of rich countries to commit to filling the coffers of the fund with public monies.

“The financial and debt crisis, especially in Europe and the United States, have developed further. We therefore have to look for both public funding but also private sources,” stressed Stoltenberg who, as co-chair of the advisory group on climate change financing, recently submitted to the U.N. an analysis of how long-term financing should be generated.

“There is no sense in having a fund, if you don’t have money for it,” Stoltenberg said.

U.N. secretary-general Ban Ki-moon agreed that short-term and long-term financing goals could only be reached through combination of public and private resources. This would not mean governments lose political control over the financing mechanism of the GCF, a point some countries said they were concerned about during the climate negotiations.

“There is a pool of possible financing options, such as carbon taxes, transport taxes, and so forth. It will be up to each country to decide which regulations it wants to adopt and implement nationally,” said Ban.

However, this did not release governments of rich nations off the hook.

There will be no forward movement in the fight against climate change without movement on climate finance, Ethiopian Prime Minister Meles Zenawi agreed.

“We need to create a price structure that will attract the private sector to invest in climate financing. Carbon pricing will send the signal to the private sector, that green technology will be profitable,” said Zenawi. “The technology of the future is green. There is a race. Who comes too late will be left behind.”

But right now, days of staggering negotiations about the operationalisation and financing of the GCF, have raised doubts among economic experts that governments of industrialised countries are truly willing to make available parts of the finance necessary to fund climate change adaptation in the global South.

“We don’t need any more reports, we need the political will,” said economist and British government advisor Lord Nicholas Stern.

The faster politicians acted, the cheaper it will cost them, agreed Mexico’s President Felipe Calderon, trying to push for the GCF to be operationalised before the end of the climate change summit on Dec 9. “Low carbon economy doesn’t come cheap. It will cost hundreds of millions of dollars a year, depending on how fast we act. The sooner we act, the less it will cost us,” he said.

Caio Koch-Weser, the vice chair of Deutsche Bank, one of the biggest banking groups worldwide, expressed his concern about the slow progress of establishing the GCF. Industry was ready to invest in the green economy, he said.

“Give us a carbon price, give us a reliable policy, and the private sector will do most of the job. We have already seen great vibrancy from the side of the business community in interaction with governments,” he said. “Of course it’s not yet of the scale and the speed we need.”

Koch-Weser further noted that the current global economic crisis also presented an opportunity for governments and businesses to transform, to find new drivers of growth.

To be able to raise 100 billion dollars annually by 2020 to finance climate change adaptation, “we need new private-pubic partnerships that provide transparent, long-lived and certain frameworks. We hope that the GCF will have a strong private sector facility and will be professionally run,” Koch-Weser said.