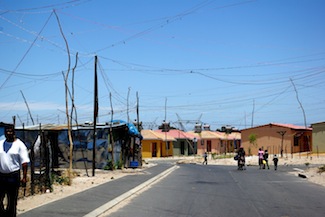 ATLANTIS, South Africa, Dec 14 2011 (IPS) - Something unusual is happening in Atlantis. Created in the 1970s to fulfill the apartheid government’s agenda to evict “coloured” South Africans from Cape Town, Atlantis has always been best known as the city that apartheid built.

But in this new era of climate change concern, the creation here of South Africa’s first eco-friendly and energy efficient low-income housing development may finally overwrite that dark legacy.

Initiated by the City of Cape Town, the project aims to build “eco houses” for 2,400 families in Witsands, Atlantis’s poorest neighborhood, and home to the majority of Atlantis’s Xhosa-speaking minority. The city hopes the project will set a national benchmark for sustainable living in low-cost housing developments.

A part of the national Reconstruction and Development Programme (RDB) that has promised housing for every South African, the project, a collaboration with the engineering firm PEER Africa, the Universities of Cape Town and Johannesburg, Eskom, and several NGOS, has handed over some 800 eco-houses since it began in 2005.

Laid out on a north-facing grid, the energy-efficient homes make use of the “Energy and Environmentally Cost Optimized (EECO™) Human Settlement Development Model™,” elaborated by PEER Africa.

According to this design, all units feature large north-facing windows (allowing winter’s lower sun to heat), a roof overhang that protects against summer’s higher sun, and insulation, especially in the ceilings, that retains the warmer or cooler temperatures inside.

Put back what you take away

“In the beginning it was very hard to get the people to understand,” recalled 34 year-old Fundiswa Makeleni, a member of the community hired by PEER Africa to educate her neighbours about the new concept. “But when I’d take them to the show houses to feel it… everyone loves it now.”

Community buy-in was vital to success, as plans went beyond north-south orientation and large windows. Additional “greening” like the provision of a tree, shrubs, and ground-cover would also be part of the package, but would require continued maintenance.

“We have to put back what we take away,” said Beth Basset of Green Communities, the NGO providing the landscaping for the houses, as well as food gardens and other green spaces like parks and playgrounds.

Like many Western Cape housing developments, Witsands is built on sand dunes. Strong winds and extreme temperatures — exacerbated in a denuded environment — are the norm.

“They’d take away a whole ecosystem, put the houses there, and go away. There was no compacting apron around the houses. The winds would come take all the sand and leave exposed foundations of up to a meter,” Basset observed of other RDP developments.

With a national backlog of over two million RDB houses, the impact of creating an energy-efficient model that promotes sustainable livelihoods could be tremendous.

Councillor Ernest Sonnenberg from Cape Town’s Mayoral committee on Human Settlements, agreed. “In Cape Town we’re in a very windy area with loose sand, so structures become unstable. The greening around the houses was a mechanism to bind the ground and prevent erosion. It was also an opportunity to experiment and see how to create a more sustainable livelihood.”

“We are the poorest of the poor here. But we use the nature to cool and warm our house. We have solar panels and solar geysers, so we’re saving energy. Each household does not use more than 50 Rand (about six dollars) a month on electricity now,” said Makeleni.

The project’s second phase, which began in 2010 and will build 1,835 units (350 have already been handed over), has added solar geysers, photovoltaic modules for lighting and cell phone charging, and roofwater and stormwater recovery systems.

Makeleni belongs to a women’s group that arose from the savings they were seeing from energy and fuel. “Each month we come together and we all put our savings on the table and put it in the bank. Then after one year we divide that money and can buy things that we need.”

For her own part, Makeleni plans to invest her share in seeds for the food tunnel that Green Communities helped establish.

“Our forefathers used to plant food to eat, never go each and every day to the shop and buy food. My wish is to go back. We have food gardens, electricity from the sun. We can succeed in this way of life with or without money. Even if you have money you can live like this. Even if you’re a single mother you can afford to live.”

Though the financial advantages are obvious, the perks that the eco-homes provide extend into other areas of life as well. Several mothers cited the greater safety of the homes. Obviating kerosene heaters, paraffin lamps, and open fires, the clean energy helps prevent accidental fires, electrocutions from shoddy illegal wiring, and health problems that come with burning other sources of heating and fuel.

“In the shacks they are using paraffin and heaters. It’s dangerous and makes the house dirty, and they can spend more than 200 Rand a month,” commented 31 year-old Vuyokazi Damane.

Finally, there is the sense of community that flowers in places with parks and green public spaces. “It’s not just building houses, it’s building community,” Beth Basset said. “We made a park and playground. It’s the first time some of those kids have walked on grass. This whole greening gives such an impetus to people’s health and well being. All the kids can be found at the park. Old people come and sit on the benches. It’s making neighborhoods.”

Councillor Sonnenberg explained that the pride that people take in their neighborhoods also translates into savings for the city.

“The fact that we were able to get communities to participate and take pride in their area alleviates a lot of cost for us. For example, if the area is sandy and sand is blowing in the street, we need additional cleaning to prevent stormwater rain blockage.”

So far the cost to the city has been minimal. A “normal” RDB house costs about 12,000 dollars to build. Making a unit into an eco-house including adding solar panels adds approximately 3,000 dollars to that bill — not an insignificant number with a housing backlog of 400,000 in the Western Cape alone. However, for now South Africa’s public utility Eskom, has been picking up the tab.

“We obviously want to move to a situation where as a city we can reduce our carbon footprint, and therefore we need to look at innovative ways of building more cost effective and energy efficient houses,” said Councillor Sonnenberg.

“We still have to learn lessons from phase two of Witsands, that will inform our future projects, but we are delighted with the results yielded, and therefore one can only say that the city must invest in future projects of this nature.”