DURBAN, South Africa, Dec 1 2011 (IPS) - As climate talks get underway in Durban, South Africa this week, progress on a Green Climate Fund is one of the hottest, most contentious tickets in town. It is also one of the great prizes to be won. 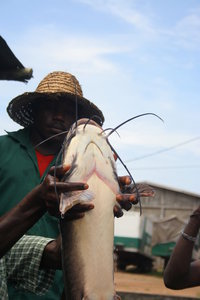 The fund would, in theory, provide a new, substantial source of funds to help developing countries adapt to the negative impacts of climate change and pursue low carbon development; it is meant to be a major vehicle for delivering 100 billion dollars a year in climate finance to developing countries by 2020.

Agreement on the structure of the fund and on sources of cash (at least for the medium term) must be secured in Durban, to keep this ambition on track. Developing country observers believe such an agreement on climate finance is vital. Why is it so urgent?

The Kyoto Protocol’s first commitment period expires late next year, and international leaders have not yet agreed a framework to succeed it. With the clock ticking on this legal deal, there will be a gap until any new version is adopted.

As developing countries press for a new global deal to cut greenhouse gas emissions, caution dictates that they must prepare to adapt to a world in which climate change wreaks damage on infrastructure, ecosystems, livelihoods and lives.

In the words of Professor Robert Watson, former chair of the Intergovernmental Panel on Climate Change, developing country decision makers are calling for a “two degree world” – where the average global temperature is curbed at two degrees above pre-industrial levels – but must prepare to adapt to a “three or four degree world.”

The current drought in the Horn of Africa, and the devastating floods in El Salvador last month and Durban, South Africa this week are indicative of the weather extremes that will become more frequent by mid-century as climate change takes hold. These impacts will be felt even in a “two degree world”, but in a “three or four degree world” they will become even more severe and unpredictable.

Climate finance is not just a story about preparing for the worst, though. Developing countries also recognise opportunities to attract investment in low carbon technologies, which will increase their global competitiveness.

What could be a more compelling prospect that to leapfrog past soon-to-be obsolete technologies that guzzle fossil fuels, and avoid some of the carbon lock-in experienced by industrialised nations?

The Government of Rwanda will launch its National Green Growth and Climate Resilience Strategy at the 17th Conference of the Parties in Durban next week.

Rwandan President Paul Kagame has said he sees low carbon development as a win-win situation for Rwanda. It could reduce Rwanda’s dependence on foreign imported oil and create an economic stimulus by redirecting payments toward clean energy production at home, as well as reducing greenhouse gas emissions.

However, financial support from foreign governments and the private sector will be needed in order to realise such ambitions.

Developing countries’ hopes for progress on climate finance in Durban are set against a background of frustrated ambition. They are approaching the end of the so-called “fast-start finance” commitment period that was agreed in Copenhagen in 2009.

The aspiration set out in the Copenhagen Accord was to raise 30 billion dollars of new and additional funding over the three years until 2012. Have industrialised countries even delivered on this deal?

The trouble is fast-start finance has no easily identifiable form, being typically delivered through existing channels of delivery and disbursement. Therefore, trying to track that funding has proved difficult and confusing.

Even seasoned observers cannot get an accurate handle on how much money has been allocated, and for what ends. While some “new and additional” funding has certainly been allocated, examples abound of projects being re-branded “fast-start” even when they pre-date Copenhagen and there is a large gap between pledges and good intention, and disbursement.

Chair of the African Group of Negotiators in the climate negotiations, Tosi Mpanu Mpanu has simply put it: “Fast start has not really delivered – only 10 percent of fast start is new and additional.”

A new online portal developed by the United Nations may start to address these issues but in the current circumstances, mistrust pervades.

The 2010 to 2012 fast start period was only ever just that: a start. Currently, we do not know where the money is going to come from to reach the loftier ambition to provide developing countries with 100 billion dollars a year by 2020.

Ideas for specific sources of revenue have been proposed, such as an air passenger levy, a tax on financial transactions and a carbon levy on polluting emissions from shipping.

Yet, mobilising such sources could take several years, which raises the prospect of a serious funding gap after the fast start period ends in 2013.

We know for sure that public sources will not fulfil that promise alone, and private sector money will be needed. In the meantime, developing countries expect public sources to lead the way.

As well as hard cash, the institutional set up for financing climate compatible development is important. A good outcome from Durban would be if the GCF were formally established in line with the recommendations put to the United Nations Framework Convention on Climate Change by its Transitional Committee on Finance.

Having the fund’s operational structure agreed would enable commitments made in Copenhagen and Cancun to be taken forward while meeting aid effectiveness principles.

A variety of other climate finance mechanisms already in operation, such as the Adaptation Fund, will also need to be shored up, and this would need to be done in parallel with agreements on the capitalisation of the GCF.

The prevailing economic climate makes discussions of climate finance difficult, but the time to deliver this fund is now.

World leaders must leave Durban with a clearer picture on what climate finance can be delivered between 2013 and 2019, beyond the fast-start period.

The form of the GCF and its capitalisation could be the “crown jewels” of a South African climate conference. They would provide real impetus for developing countries to step up climate action themselves.

* Tim Ash Vie is Head of Negotiations at Climate and Development Knowledge Network.