RIFT VALLEY, Kenya, Jan 24 2012 (IPS) - Six-year-old Victor Muruga points to a hole in the bush that he calls his “bedroom”. “I sleep there, under that tree and my mother sleeps under that blanket,” says Muruga. 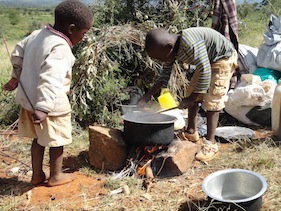 Muruga is in a jovial mood as he prepares lunch for the family. The bubbly boy, his three-year old brother Ian Kimani and their mother had to initially spend five days in the bush after being transported here to Mumoi farm, enduring the scathing sun and biting cold as they waited for the government and Kenya Red Cross Society to provide them with tents.

Muruga’s family are among the 4,000 Internally Displaced Persons (IDPs) affected by Kenya’s 2007/2008 post-election violence who live here on Mumoi farm in Subukia Township, 200 kilometres north west of Nairobi. Four years after the violence, they are yet to be allocated their one-hectare piece of land that the government promised all IDPs.

The families living on Mumoi farm want the 1,2 hectare farm, but the government refuses to buy it for them, saying that they had been relocated there illegally.

“The ministry does not intend to buy that land because it is rocky and unsuitable for farming, and the government was not involved in moving them there,” Permanent Secretary in the Special Programmes Ministry, Andrew Mondo, told IPS.

Mondo says that other government ministries like the Ministries of Land, Agriculture, Water, Roads and Education need to be involved in assessing and endorsing the land, and settling IDPs.

In the country’s 2011/2012 budget allocation, Finance Minister Uhuru Kenyatta set aside 60 million dollars for resettling IDPs. However, the process of resettlement has been characterised by corruption, tribalism and hostility to the IDPs.

Early last year, the government launched an investigation into a missing two million dollars that had been set aside for the resettlement IDPs, which had allegedly been misappropriated by officials in various ministries and even representatives of IDPs.

The 2007/2008 post-election violence displaced over 660,000 people, over half of whom were displaced in the Rift Valley Province. While more than 300,000 families have returned to their farms, and their ethnic homelands in Central, Nyanza and Western Provinces, some have sold the homes they were forced to flee from and bought land elsewhere.

There remain over 15,000 families displaced by the post-election violence awaiting their land settlements in Rift Valley Province, the largest province in Kenya. Each family has an average of five children.

“These are the people we recognise, plus the 5,710 families evacuated from the Mau Forest in 2009 who are camping in three major camps along the forest boundary,” Mondo says.

But the Mumoi farm IDPs refute allegations that they are not victims of the post-election violence and claim that the government wanted to resettle them in Central Province against their will. Naivasha Member of Parliament, John Mututho, then facilitated the relocation of the IDPs to Mumoi farm, claiming that the government had failed to resettle them.

“The government told all IDPs in the country to identify suitable land for themselves and alert the concerned ministry if they find it. That is what we did. We found this land and the seller is willing to sell it to us,” Ibrahim Kihara, spokesperson for IDPs at Mumoi farm, told IPS.

Last week, Mututho petitioned the high court to allow him to resettle IDPs. He has also sued the government for sabotaging the IDPs resettlement exercise.

But not everyone is happy that politicians have become embroiled in the row to resettle IDPs. A group of over 2,000 displaced persons from the country’s largest camp at Mawingu took to the streets early January to protest against being taken advantage of by politicians.

They also condemned Mututho for calling on IDPs to squat on private land.

“Politicians should stop misleading the IDPs, and politicising the resettlement issue to get votes in the forthcoming elections,” Osman Warfa, the Provincial Commissioner for Rift Valley Province, told IPS.

Another politician, Luka Kiagen, a Member of Parliament for Rongai Constituency, in the Rift Valley Province, has been leading a section of elders to complain over the settlement of IDPs in Rongai.

He claims that 10,000 people from the Kikuyu community had settled in Rongai at the expense of the largely Kalenjin community who had been evicted from the Mau Forest.

“People displaced from Mau Forest who are residing along the border have been forgotten in the resettlement programme,” Kigen told IPS.

The government maintains that there was no discrimination in the resettlement exercise.

“Such allegations are unfounded. It is not by choice that members of the Kikuyu community are the largest number of IDPs,” Mondo told IPS.

Non-governmental organisations and civil societies have blamed the government for the continued delay in resettling IDPs.

“The IDPs issue has exposed the intolerance and divisions among communities. The government has not been willing to clear this blot on the face of Kenya. It has failed in upholding the constitution that guarantees security and accommodation for all Kenyans by false promises for four years.

“The government claims that there is no land for relocation. But look at the thousands of acres owned by politicians and lying idle in the country. Can’t they be bought by the government at least to settle the IDPs?” Ndung’u Wainaina, director of the International Center for Policy and Conflict, told IPS.

In December 2011 the government created a task force mandated to fast track the resettlement process. But Peter Kariuki, the coordinator for the IDPs National Network, says that four years down the line this is “too little too late.”