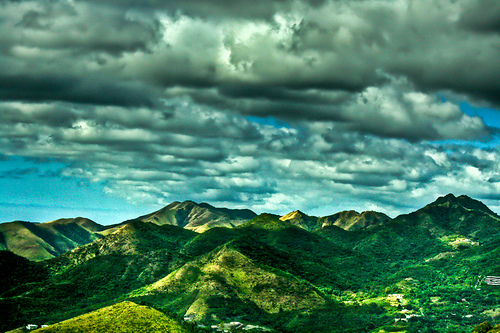 The gas pipeline would cross the central mountain range and the ecologically delicate karstic zone. Credit: d3b/CC BY 2.0

SAN JUAN, Jan 24 2012 (IPS) - As Puerto Rico seeks to lower soaring utility rates while simultaneously shifting toward cleaner energy sources, it faces grassroots opposition to two major projects even though at least one is 100-percent renewable.

Objections to the projects – a natural gas pipeline and wind installation – revolve mostly around their locations, underlining the complex interests involved in actually implementing changes to the island’s power grid.

The pipeline would start on the island’s south coast, head northwards through the central mountain range and the ecologically delicate karstic zone, and then eastwards into the densely populated San Juan metropolitan area.

PREPA holds a monopoly on electricity generation in the island, but since the 1990s it has purchased power from private facilities.

The government claims the gas pipeline will lower utility rates, which have skyrocketed in recent years, and reduce dependence on dirtier fossil fuels.

Most of the utility’s power is currently produced by thermoelectric facilities which use highly polluting petroleum-based fuels, like Bunker C and “destilado #2”.

“Natural gas is the cleanest fossil fuel there is,” PREPA says, adding that it generates 64 percent less atmospheric pollutants than oil and is more economical.

Citing data from the U.S. Energy Information Administration, the utility says that natural gas will remain cheaper than oil and that world supplies will be sufficient for decades to come.

But Puerto Rico will be doing no more than trading one dangerous, non-renewable fossil fuel for another, says University of Puerto Rico professor Arturo Massol-Deya, one of the gas project’s most outspoken opponents.

“As an island we are in the dead end of oil dependence, and the government is trading that for the dead end of natural gas, when we have abundant sun, wind and water resources with which to generate the energy we need,” Massol-Deya told IPS.

Massol-Deya is spokesperson of Casa Pueblo, a grassroots community organisation in the mountain town of Adjuntas, which the proposed pipeline would bisect from south to north.

“We have strong, well-founded objections with regards to environmental impact, as well as safety in the face of inevitable natural challenges like steep slopes, flood-prone areas, high rainfall, geological faults and many more,” said Massol-Deya. “And besides, the savings of switching from one fuel to another will barely amount to one cent per kilowatt hour.”

Casa Pueblo and other groups opposed to the gas line are at pains to make clear that they do not necessarily oppose natural gas. They believe a transition can be made from thermoelectric power to natural gas without building a tube across the island.

“Switching Costa Sur to natural gas would require no major modifications,” geographer Alexis Dragoni told IPS. “It would only require that the facility’s burners be replaced.”

Dragoni is a member of Casa Pueblo’s technical team.

Retrofitting Costa Sur to run on natural gas would have PREPA use gas for no less than 43 percent of its electricity, with no need for a “gasoducto” cutting across Puerto Rico. A pipeline has indeed been built from Ecoelectrica to supply gas to Costa Sur but its final segment, of about 50 metres, has yet to be built, said Dragoni.

The “Via Verde” pipeline is to be built by the Spain-based Fenosa Corporation, which bought Ecoelectrica from the controversial U.S.- based Enron in 2003.

The Casa Pueblo leaders are strong advocates of solar energy. All the organisation’s facilities in the town of Adjuntas have been powered by photovoltaic panels since 1999.

However, the Santa Isabel wind power project is under fire from farmers, local communities and environmental groups, who have created an Agriculture Resistance Front (FRA).

The civil society coalition advocates for the protection of Puerto Rican farmland from threats like urban sprawl and the windmill project, which entails 44 to 65 windmills being built by the U.S.- based Pattern Energy Corporation in the heart of Puerto Rico’s fertile southern plains.

The windmills are expected to generate 75 megawatts, which Pattern claims can power 25,000 homes.

Construction of the wind project began in November. “They have already compacted the soil with their heavy machinery, they have destroyed the drip irrigation system and damaged the topsoil, which takes centuries to form. The best agricultural lands are slipping from our hands,” said FRA member Karla Acosta.

According to FRA spokesman and UPR student Warys Zayas, “The project will impact between 3,500 and 3,700 cuerdas.” (3,700 cuerdas equals 3,594 acres) “The area affected will include not only the windmills’ bases, which together would occupy 21 cuerdas, but also the area within a radius of 1.6 kilometers of each windmill base.”

FRA cites U.S. Agricultural Census data that indicate that Puerto Rico has already lost 19 percent of its farmland between 2002 and 2007, as well as studies by University of Puerto Rico professor Myrna Covas on food security, which estimate that local agriculture produces no more than 15 percent of the food Puerto Rico residents consume – the rest is imported.

Food security advocates are alarmed by these figures, given that with approximately 350 inhabitants per square kilometre, Puerto Rico is one of the most densely populated areas in the world. Population has more or less doubled in the last 40 years, environmentalist Juan Rosario of Mision Industrial told IPS.

Santa Isabel has some of Puerto Rico’s top farmland, generating some 30 million dollars in crops per year including tomatoes, peppers, melons, mangoes and onions. Farms provide about 3,000 jobs in the region, according to farmer Ramón González, president of the PR Farm Bureau (Asociación de Agricultores).

“We must not destroy the few lands that feed us,” added FRA spokesperson María Viggiano. “We suggest that the windmills be placed on lands that have already been industrialised and have no agricultural value.”

With regards to energy alternatives, there is no consensus among local experts and activists as to what would work. FRA does not oppose wind energy, just as long as such projects are not placed on farm land.

However, other groups do not favour wind power and see better alternatives elsewhere.

Sáez-Cintrón is spokesperson for the Coalición Pro Bosque Seco, a group that seeks the protection of the Guánica Dry Forest, in the island’s southwest. The organisation opposes a wind energy project proposed for the forest’s immediate vicinity.

“But what is even more important is to educate about energy consumption,” he added. “Renewable energies can be no more than a complement to fossil fuel sources.”

“By implementing policies to save energy we can get six to 10 times the cost savings of renewable energy,” said Luis Silvestre of the Puerto Rico Ornithological Society. “They require a much smaller investment and do not lead to debt.”

“Renewable energies cannot possibly lower utility rates. That can be achieved with operational improvements in the utility, as well as modifications of the currently existing grid.”