ACCRA, Feb 13 2012 (IPS) - The incessant buzzing of mosquitoes was the first sign that there was something wrong. While Bernard Akumiah could clearly hear the small insects, there were none within his vicinity. 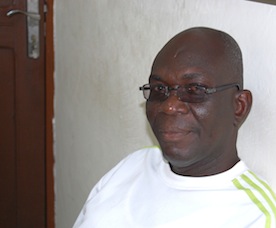 The buzzing of mosquitoes eventually turned into voices coming from nearby rooms. The voices sounded as though they were in French, a language neither Akumiah nor his brother, with whom he lived, could speak.

The year was 1982 and the experience of hearing mosquitoes that did not exist was the first sign Akumiah, then a young man with his whole life ahead of him, had schizophrenia. The mental disorder, which can now be treated with the right combination of antipsychotic drugs, is characterised by paranoid delusions and auditory hallucinations that are often paired with social dysfunction and anxiety.

But Akumiah’s diagnosis changed his life. Like many others with schizophrenia, he has been a victim of stigma.

“At first I had a lot of family support, they would even bring me food so I didn’t eat the food prepared at the hospital but when I was discharged, somewhere along the line, there was something like discrimination,” Akumiah said.

Stigma is a major impairment to mental health treatment in Ghana. The country is expected to pass a new Mental Health Bill by the end of March that could greatly improve mental health services if it is properly enforced.

Now 59-years-old, Akumiah has managed to control his illness by taking powerful antipsychotic medication every day. He is a volunteer with the Mental Health Society of Ghana and dedicates much of his free time to reducing the stigma associated with mental illness in the country.

He remains one of the lucky Ghanaians who are able to live normal lives with a severe mental illness.

He said the government needs to recognise mental illness as a legitimate health concern. “When you fall sick your family rejects you,” Akumiah said. “So who should take care of you? The government must accept and embrace people with mental illness with their whole heart and not by word alone but by deed.”

It is estimated that 98 percent of Ghanaians with mental illnesses never receive treatment. There are only three mental health facilities in the country, all located in the more populated south. In the poorer north there are no mental health services at all. There are more than 24 million people in Ghana but only 12 psychiatrists.

“Our system for mental healthcare is quite poor,” said Osei.

Accra Psychiatric Hospital currently has 800 patients but only 500 beds. In the men’s ward patients are strewn about the floor of an open courtyard. Most are in a groggy state, thanks to their medication, and ask for better food or for a way out. Some said they get visits from family members but many others have been abandoned by their kin.

Osei said mental illness is not a priority in Ghana because of the stigma associated with it. That stigma manifests itself in three ways: against the condition itself, the patient and the mental health practitioner.

That superstition is most evident in the prayer camps scattered around Ghana. People with mental illnesses are often chained in the camps as preachers pray for their miraculous recovery.

But Ghana’s mental health practitioners and advocates believe the country’s new Mental Health Bill could help end the stigma against mental illness and allow for better treatment across the country.

The Mental Health Bill was first put before Parliament in 2006. It has gone through its first and second readings and is now at the committee stage. Humphrey Kofie, executive secretary of the Mental Health Society of Ghana, said the country’s health committee has assured him the bill will be passed by the end of March 2012.

Kofie said the bill would help protect the human rights of people who suffer from a mental illness. People who are known to be mentally ill in Ghana, for instance, are often prevented from voting during elections. Kofie said the Mental Health Bill would put an end to that kind of discrimination.

Osei said the new bill would be one of the most progressive pieces of legislation of its kind in Africa. “Healthcare will be community oriented instead of institutionalised, a mental health board and a trust to collect funds for mental healthcare will be established, it will provide enforcement power to end rights abuse and department for public education to further reduce stigma and train as well as monitor traditional healers,” he said.

But Kofie said the law would need the proper legislative instruments to be put into practice.

Ghana’s Disability Rights Bill, passed in 2006, has still not been enforced. The country’s institutions are still largely inaccessible to people who have physical disabilities. Kofie has feared that the situation could be similar for the Mental Health Bill.

“The future is the legislative instrument,” he said.