In places where there aren't enough women for poorer men, the imbalance could confine women to a permanent "underclass". 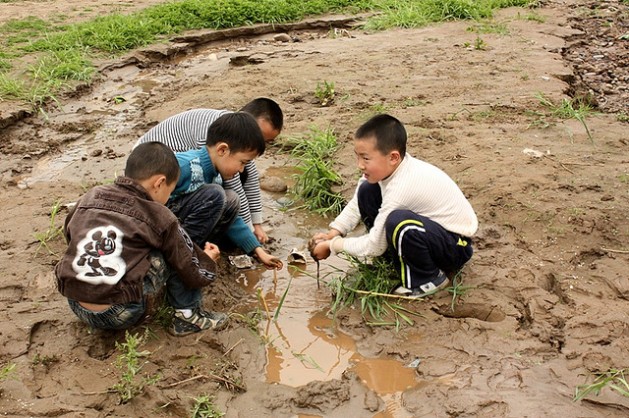 A group of Chinese boys plays in the mud. By 2013, one in 10 Chinese men of marriageable age will lack a female counterpart. Credit: Jimmiehomeschoolmom/CC BY 2.0

WASHINGTON, Feb 21 2012 (IPS) - In 2005, there were 163 million more men in Asia, more than the entire female population of the United States. Asia is now facing serious consequences from sex selection, a situation the West might have inadvertently helped create.

In the 1970s, noticing the population boom in Asia, U.S. foreign policy initiatives concentrated on population control in developing countries over fears of hoards in Asia overwhelming U.S. borders, says Mara Hvistendahl, author of “Unnatural Selection: Choosing Boys Over Girls, and the Consequences of a World Full of Men.”

The U.S. Agency for International Development, the World Bank and other organisations began pouring money into the perceived problem.

A lot of effort also went into legalising abortion – not as a women’s rights issue, but as a method of population control, Hvistendahl said. Researchers noted that parents, particularly in Asia, kept having children until they had a boy. To them, the obvious method to bring down birth rates was to allow parents to have a male child on the first try.

This was around the same time as reproductive technology, notably fetal sex determination through amniocentesis, advanced. In 1975, doctors at the All India Institute of Medical Sciences, funded by the Rockefeller Institute and Ford Foundation, experimented by providing free amniocentesis trials for poor women.

As a result, about 1,000 women with female fetuses aborted, and the doctors proclaimed sex-selective abortion as a productive method of population control, Hvistendahl notes.

Sex-selective abortion spread throughout countries like India and China. The method was openly endorsed by Population Council President Bernard Berelson, German scientist Paul Ehrlich and even some women such as former U.S. Congresswoman Clare Boothe Luce.

Still, it’s a stretch to solely blame the West for sex-selection in Asia, Lena Edlund, an economics professor at Columbia University, told IPS. She believes the introduction of fertility technology made sex selection much easier, but it is the cultural norms and the willingness to reject a female child that mattered most.

The trend is no longer just confined to India and China. Increasing sex ratio imbalances are showing up in South Korea, Taiwan, Vietnam, Albania, Armenia and other Caucasus countries. A Gallup poll in 2011 showed that even parents in the United States prefer sons.

Despite presumptions, sex selection is no longer an exclusive result of economic hardship or one-child policies. Hvistendahl believes it’s an “internal choice”.

“The desire to control reproduction isn’t the entire story… Say, for example, one day it becomes possible to select children for height. Since tall people tend to have an easier time in most societies, it’s reasonable to assume that over time we’d see an increase in children’s average height. The same has happened, more or less, with sex selection and son preference,” she said.

The full repercussions of sex selection are just dawning. In China, the now grown-up surplus males of the 1980s are unable to find female partners, Hvistendahl observed. By 2013, one in 10 Chinese men of marriageable age will lack a female counterpart. By 2020 in northwest India, an estimated 15 to 20 percent of men will lack female counterparts.

“Some American economists have predicted that as women become more scarce they will also become more valued in a meaningful way… But essentially what has happened is that women, and especially poor and at risk women, are instead increasingly seen as valuable commodities. That’s a critical distinction,” Hvistendahl told IPS.

Edlud thinks noticing only the dearth of women as the problem is “misguided”.

“The male perspective is that there aren’t enough women to marry or have as a partner. The female perspective is lost because, for women, the problem is they are becoming reduced to chattel being produced by poor and sold to the richer male population…I think (self correction of sex ratios) addresses the concern for men, who won’t be able to find partners, but does not address the concern for women’s welfare.”

The U.S. Department of State’s 2009 Trafficking in Persons report listed widening gender imbalance in Asia as a cause of increased sex trafficking. Trends are increasing in Asia for forced marriages, forced prostitution, and trans-border marriages where women in poor areas are married off to men in richer regions.

Some poor families in countries like Vietnam see better prospects in having daughters they can sell. That, in turn, creates other problems where there aren’t enough women for poorer men. Edlund notes that, disturbingly, the situation might confine women to a permanent “underclass“.

“(Poor people) will do better by having daughters, like in Vietnam, who can marry Taiwanese or Japanese or Korean men instead of having a son who’ll not be able to marry a Vietnamese woman because Vietnamese women are going to these other places…Then we can have a situation where rich countries produce sons and the women would be this ‘underclass’ produced by poor people. I think that’s a big problem,” she said.

Governments have tried to deal with the problem mainly by banning ultrasound screenings for sex determination, which Edlund thinks is inadequate.

“Prenatal screening is part of prenatal care needed for the health of the mother and the child, so it’s very difficult to ban prenatal sex determination. Once the identification is done, it’s difficult to ban sex-selective abortion without banning abortion altogether. I think these bans are essentially ineffective, they may send a signal but I think the important margin is to look at all the various ways in which parents discriminate against girls and try to rectify that.”