WASHINGTON/KABUL, Feb 20 2012 (IPS) - Nearly a year after the Barack Obama administration began negotiations with the government of Afghan President Hamid Karzai on a U.S. military presence in Afghanistan beyond 2014, both sides confirmed last week that the talks are still hung up over the Afghan demand that night raids by U.S. Special Operations Forces (SOF) either be ended or put under Afghan control.

Karzai has proposed the latter option, with Afghan forces carrying out most of the raids, but the U.S. military has rejected that possibility, according to sources at the U.S. Central Command in Tampa, Florida. 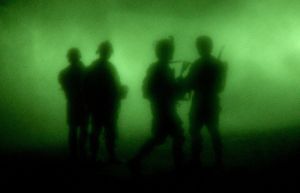 U.S. soldiers dismount from their vehicle and prepare to raid a series of compounds in the Maywand District of Afghanistan on Nov. 22, 2010. Credit: US Army/CC BY 2.0

Karzai’s persistence in pressing that demand reflects the widespread popular anger at night raids, which means that Karzai cannot give in to the U.S. insistence on continuing them without handing the Taliban a big advantage in the political-military maneuvering that will continue during peace talks.

The dilemma for both the United States and Karzai is that the United States has been planning to leave SOF units and U.S. airpower – the two intensely unpopular elements of U.S.-NATO presence in the country – as the only combat forces in Afghanistan beyond 2014.

In an interview with the Wall Street Journal Wednesday, Karzai gave no evidence of backing down on his demand regarding night raids and the closely related issue of U.S. troops taking and holding Afghan prisoners. Karzai identified the issues involving “Afghan sovereignty” as “civilian casualties, attacks on Afghan homes, raids on Afghan homes, taking prisoners and keeping prisoners”.

Karzai warned there could be no “partnership” agreement with the United States until those issues were resolved.

Defence Secretary Leon Panetta had confirmed that fact in Congressional testimony Tuesday, admitting that U.S. and Afghan negotiators “still have difficulties” with the issues of night raids and the transfer of U.S.-run detention facility to the Afghan government.

Panetta said he was hopeful the two sides would work out a compromise on those issues in the coming weeks.

In his speech to a Loya Jirga, or grand assembly of leaders from around the country, which he convened last November, Karzai said he would insist on “an end to night raids and to the detention of our countrymen” by the U.S. as conditions for a “partnership”.

The Jirga, which was generally considered to be packed with supporters of Karzai, approved those two conditions and called for U.S. troops who committed crimes to be held accountable in Afghan courts.

But Karzai has been warned by advisers that he cannot continue to insist on an end to night raids. He has little hope of surviving without continued U.S. military presence and large-scale assistance. And Panetta suggested last week that the Obama administration wants to end the U.S. combat role even before 2014, further weakening Karzai’s bargain hand with Washington.

In interviews with IPS, people close to the Karzai administration said they had advised Karzai that he must give in to the U.S. on the issue.

“We need (the U.S.) support and presence in Afghanistan,” said one unofficial adviser, “so Karzai should relent on the night raids issue.”

Instead of demanding an end to targeted raids, the adviser said, Karzai should propose that the U.S. train Afghan forces to carry out such operations.

In fact, Afghan Interior Minister Bismillah Khan Mohammadi revealed during a visit to Ghazni province in mid-January that Karzai had proposed that the United States turn over most targeted raids to Afghan forces, but that U.S. units would be allowed to carry them out, in cooperation with Afghan forces, in certain “urgent” circumstances.

But officials at the U.S. Central Command have vetoed ending the raids or putting them under Afghan control, according to a military source close to those officials.

“They’re not going to give them up,” the source said. “This is the last offensive tactic we will have available,” he added, “and the Taliban have yet to put anything on the table that would justify giving it up.”

Officials of the International Security Assistance Force (ISAF), the U.S.-NATO military command in Afghanistan, claim to have responded to the Karzai government’s concerns by including Afghan units in nearly all of them. Last December, the spokesman for ISAF, German Brig. Gen. Carsten Jacobson, said, “Ninety-five percent of all night operations at this stage are already partnered.”

If Karzai does finally give in to U.S. insistence on the freedom of action for SOF units in Afghanistan, Afghans expect the night raids issue to play a key role in eventual negotiations on ending the war. One unofficial adviser told IPS that the Taliban will definitely demand an end to such raids, and said Karzai might support that demand in return for an end to Taliban suicide bombings, planting of mines and agreement to renounce Al-Qaeda.

Meanwhile, popular Afghan anger at U.S. night raids has continued to grow as the pace of those raids has risen steeply in recent years, and thousands of families still suffer the consequences of long-term detention because of the raids.

Haji-Niaz Akka, 48, a shopkeeper in Kandahar city, told IPS about a two a.m. raid on his home almost eight months ago in which U.S. forces tied up all four males in the house and took them away. Two of them were released two days later, but the other two, his nephew and son-in-law, were taken to Bagram air Base and remain in detention.

“These night raids violate our customs,” Akka said, expressing a common Afghan view. “It’s better to be killed than to be searched at night while sleeping with (one’s) wife and kids. This is absolutely unacceptable.”

Zahir Jan Ustad, a resident of Kandahar’s Panjwai district, is still angry about two of his brothers being detained in two separate night raids in Kandahar City and in Panjwai last September.

“We don’t know why the Americans are disturbing us by night raids which we hate,” he told IPS in an interview. “They are coming at night and searching our women. Our women are our honour, and we really hate (the U.S.) for that,” Usted said.

The Afghan anger at night raids is also a major factor in the antagonism felt by Afghan army officers and soldiers as well as police toward foreign troops that has resulted in 40 attacks by Afghan security personnel on U.S. troops since 2007, three-fourths of them in the past two years. Nearly 100 U.S. and NATO personnel have been killed or wounded in such attacks.

A study done for the U.S. military by behavioural scientist Jeffrey Bordin in late 2010 and early 2011 revealed that night raids and house searches were mentioned more frequently than any other issue by Afghan troops as a reason for serous altercations with U.S. forces.

The study, originally unclassified but classified by ISAF in the latter half of 2011, showed that more than one-third of the groups of participating Afghan security personnel in 19 locations in three Eastern provinces had recounted instances of serious altercations with U.S. troops over U.S. night raids and house searches.

The study reported that many Afghan troops and police expressed the view that U.S. troops, who they regard as “infidels”, should never enter an Afghan’s home. Most of the Afghan security personnel participating in the study expressed the view that any raids on homes should be led by Afghan police in the presence of local community leaders.