CAPE TOWN, South Africa , Feb 7 2012 (IPS) - When a financial crisis threatened the existence of Africa’s oldest community station, Bush Radio, an outpouring of sympathy and appeals went viral on social networking sites like Twitter and Facebook. However, despite this outspoken support that showed that the station is worth saving, its future remains uncertain. 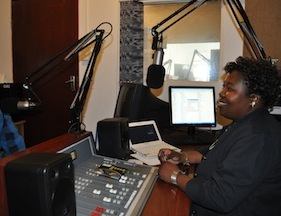 Radio Zibonele began broadcasting under the bed of a shipping container truck in 1995. Credit: Davison Mudzingwa/IPS

It got the message out there to the decision makers, and because it was in their faces all the time… there has been offers of assistance,” said Adrian Louw, programme integrator at Bush Radio.

The emergence of social media has opened new opportunities for community broadcasters in Cape Town, South Africa. Not only are they able to interact more effectively with their audiences, but they can now do so cheaply.

Bush Radio broadcasts to at least 260 000 listeners, predominantly in the poor Cape Flats, formerly an apartheid housing area for people of colour.

“The use of social media has been important for us because it has allowed us to do stuff without getting a specific designer on board that knows our internet protocols,” said Louw.

The station has a rich history of defiance during the apartheid era. Back then it broadcasted illegally after repeated applications for a licence were turned down. Since the granting of a broadcasting licence in 1994, the station has evolved with the times.

“If blogging works, why do we have to pay thousands of (South African) Rands to get a designer to design a fancy website for news when a free CMS (content management system) works?” asked Louw.

Core to Bush Radio’s programming are issues that affect their audiences. These include HIV/AIDS, drug abuse, poverty and crime. Highlighting these issues through social media is convenient in several ways. “The nice thing about social media is that it really assists community media with its mission, in terms of increasing access to the station and really making people feel that they are owners of the station because they now can communicate with the station quickly,” says Louw

“Even if you are not interested in something you get an alert, like ‘do not forget that Sakhisizwe (radio programme) is going to talk about HIV/AIDS at 12pm.’ In that way, a specialised audience will interact.”

Bush Radio is also renowned for training young people in broadcasting. Social media has enabled them to spread the message quicker. “For instance we had a recruitement for news volunteers. We had a response from over sixty applicants within three days.”

For Bush Radio, social media complements the weaknesses of radio – its immediacy and transient nature. With social media, the station can now relay important messages that have a presence on the internet.

“We seriously believe that technology must be used in bettering people’s lives,” said Louw.

Across town in South Africa’s biggest single township of Khayelitsha, Radio Zibonele has a lot in common with Bush Radio. Radio Zibonele’s listenership has steadily increased with the station’s meteoric rise from its days of broadcasting under the bed of a shipping container truck in 1995.

With over 220 000 listeners, feedback grew and inundated the single studio phone line. The advent of social media has been a welcome development for Radio Zibonele.

Like most community media, Radio Zibonele traditionally interacts with its audiences through outreach programmes such as road shows and other sponsored community activities. However, of late, dwindling sponsorship has been a hindrance. Social media, said Ntebaleng Shete, the station’s programme manager, fills the gap by reconnecting with the community.

The high penetration of mobile phones with internet connectivity has also boosted the number of listeners who log onto social networks. According to latest figures provided by Cellular Online, a mobile portal, South Africa has a growing subscriber base of close to 20 million users.

“I think people are growing with technology…many of the people want to be on Facebook and Twitter,” said Shete.

However, Chris Kabwato, the director of Highway Africa, a Pan-African programme at Rhodes University that focuses on research, education, media and digital technologies, said community media in Africa has a long way to go to utilise social media.

“(There are ) the perennial challenges of lack of internet access… and the general lack of technical knowledge around the use of new media on – mobile, internet, web-based social applications,” said Kabwato of the factors that have hampered the full usage of social media.

He, however, believes that vast opportunities to develop more interactive programmes and to generate revenue from social media exist.

**The story that moved on Feb. 3 incorrectly stated that Bush Radio had received sufficient financial support to save the station.