Civil Society Determined to Have an Impact on Rio+20 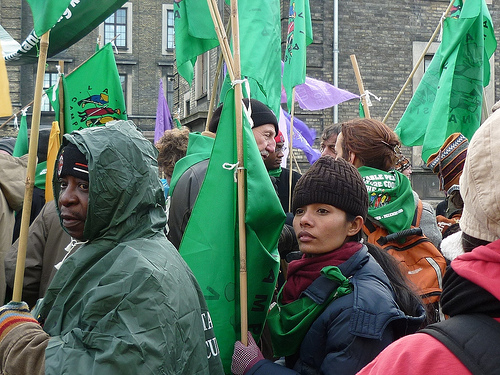 RIO DE JANEIRO, Apr 25 2012 (IPS) - Innovating and stepping up the pressure on governments are the bywords for civil society participation in the run-up to Rio+20, a conference with the ambitious goal of changing the way humankind relates with the planet.

Rio+20 is the United Nations Conference on Sustainable Development, which will take place Jun. 20-22 in Rio de Janeiro, Brazil, the same city that hosted the historic Earth Summit in 1992.

“There is a great deal of concern over what is going to happen. There is skepticism,” Marcelo Cardoso, executive coordinator of the non- governmental Vitae Civilis Institute, told Tierramérica. “For us, it will be an opportunity for international civil society to work together towards developing agendas of convergence” with the authorities and the private sector to achieve consensus.

Agenda 21, the plan of action adopted at the Earth Summit, stated the need for broad public participation in decision-making, with a particular emphasis on nine major groups: indigenous peoples, farmers, workers and their trade unions, local authorities, business and industry, the scientific and technological community, women, children and youth, and non-governmental organisations.

These nine groups are striving to influence the formal discussions through the organisation of campaigns and parallel activities within the Stakeholder Forum for a Sustainable Future.

“Civil society organisations must take on a global role,” said Cardoso. While civil society can have a key impact on decision-making processes, it is also a complex and “highly fragmented” sector, he noted.

“We want to bring together organisations that work on the issue of the green economy and integrate programmes,” said Cardoso. In 1992, civil society played a leading role. “Today we need to act in conjunction with the private and governmental sectors,” he added.

The Vitae Civilis Institute was a major civil society actor in 1992 when the principles of sustainable development were defined. Since 2008 it has been participating in United Nations discussions for the writing of the “zero draft” of the Rio+20 outcome document, as part of the group of non-governmental organisations.

In addition to this final document, Rio+20 is also supposed to produce a programme of sustainability targets that range from poverty eradication to the stabilisation of the global climate, although it is most likely that no binding commitments will be adopted.

The foundations should also be laid for global institutions with the power to implement and enforce the agreements reached.

Sustainable development is traditionally defined as development that meets the needs of the present without compromising the ability of future generations to meet their own needs. It is also meant to comprise three pillars: economic development, social development and environmental protection.

But the past decades have seen few advances in this model, and today the world is facing an economic and financial crisis that has primarily affected the industrialised North as well as more profound and lasting crises, such as the climate crisis, the loss of biodiversity and natural resources, and the persistence of poverty.

Rio+20 runs the risk of ending up as a major step backwards for nature, warned 18 environmental experts, former government ministers and legislators from Brazil in a statement released Apr. 18.

The authors of the statement – who include former Brazilian environment minister Marina Silva – consider the agenda of the conference to be highly “diluted”, since it does not establish environmental issues as the central focus.

For Carlos Henrique Painel, coordinator of the Brazilian Forum of NGOs and Social Movements for the Environment and Development, the challenge for civil society is to put forward “real solutions.”

Painel is one of the organisers of the People’s Summit at Rio+20 for Social and Environmental Justice, taking place Jun. 15-23, which aims to act as a counterpoint to the official conference.

Many organisations oppose the concept of a “green” economy as the “monetisation of nature and common goods and resources,” he told Tierramérica. What is needed is a “new pact for a global agenda.”

“We want to highlight the causes of the structural crises we are facing, and show the genuine solutions that are practiced by the peoples, such as agro-ecology and permaculture,” said Painel.

Meanwhile, the chief negotiator of the Brazilian delegation at Rio+20, André Corrêa do Lago, claims that civil society can not only make suggestions but also actually influence the course and ecisions adopted by many countries.

An online platform launched on Apr. 16, Rio+20 Dialogues, is aimed at enhancing public participation, he explained at a seminar for journalists.

The web tool, which allows for up to 400,000 people to be logged in at the same time, was developed to bring together world experts from academia, civil society, the private sector and the media to define practical recommendations “that will be taken directly to the heads of state and government during the high-level segment of Rio+20.”

This use of technology can help to ensure “broad and innovative participation,” he said. While it may not be ideal, “it is an important contribution.”