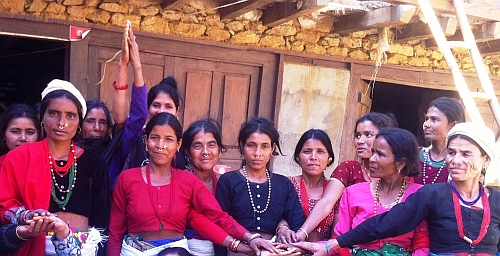 RAKAM KARNALI, Western Nepal, Apr 11 2012 (IPS) - Life, already hard in Nepal’s remote western region, is getting worse thanks to HIV infection brought back by men who go to neighbouring India for seasonal work.

Worst hit are the region’s women, many of whom have had to sell off their land and livestock to get HIV treatment for their husbands and, in many cases, for themselves.

Rakam Karnali is typical of the small hamlets that dot the hilly mid-west and far-west regions that are home to most of the seasonal migrants who cross over to India, a country which provides passport-less entry to Nepalis.

The destination for millions of semi-skilled and unskilled Nepali workers, India has 2.5 million people living with HIV/AIDS. Its big cities are also hubs for sex workers recruited from Nepal’s poverty-ridden regions.

“Nowadays, the men only come back with HIV/AIDS and bring more suffering to the family,” Jala Majhi, who is HIV positive, tells IPS.

Jala said women like her once dreamed of an end to grinding poverty by sending their husbands and able men to work abroad, but too many are coming back with the virus. “The wives not only become widows but are left destitute and infected with HIV/AIDS.”

“I don’t know how much longer I will live. I have accepted my fate, but I am very worried about my children,” says Purna Biswakarma, a 35-year-old widowed by HIV and living with the virus in this remote village.

Western Nepal has a history of neglect by governments in Kathmandu, resulting in deeply ingrained poverty. At least half the population of the region lives below the poverty line with the situation distinctly worse compared to other parts of this least developed country.

According to Nepal’s 2011 census, out of a total population of 26.7 million people, almost two million are working abroad causing hardships to households, but providing badly needed remittances.

Nepal’s 2010 progress report for the United Nations Millennium Development Goals predicts that the target of bringing poverty levels in the country down to 21 percent will be met by 2015.

Nepal, according to the progress report, has also succeeded in stopping the spread of HIV/AIDS, one of the eight MDGs, but ground realities in western Nepal appear to be far different.

It is common to see women widowed by HIV forced to work as labourers, in western Nepal, though even this is difficult because of social stigma attached to HIV and fears of contracting the virus among villagers.

“When my husband died, the villagers guessed that he succumbed to AIDS and I was blamed for that,” says 35-year-old Nani Devi Shahi, who was ostracised by the community and forced to live in isolation for many years.

“I was infected by my husband, but people accused me of being a sex worker and infecting more men,” said Jala.

The villagers banned her from walking near their homes and using public taps. Her mother-in-law finally threw Jala out of the house along with her young daughter.

Rakam Karnali village mirrors the harsh reality of Nepal where HIV positive women are stereotyped as having contracted HIV through immoral behaviour and blamed for spreading the disease.

Women infected with HIV are denied access to resources in their own households, according to the report ‘Women and HIV/AIDS – Experiences and Consequences of Stigma and Discrimination-Nepal’, published by Family Health International in 2004. That situation has barely changed.

“After all these years of sensitisation campaigns all over the country there has been little impact, especially for women living in remote areas as society is unwilling to change,” says Rani Devi Bohara, a community social worker.

Bohara blames apathy on the part of the government and development agencies towards the women who live with the multiple traumas of HIV infection, social stigma and extreme poverty.

According to the government’s National Centre for AIDS and STD Control (NCASC), women in the 15-49 age group form over 28 percent of the estimated 55,000 people living with HIV in the country.

“What is needed is not just anti-retroviral medicines but psychological counselling for both the victim and her family as also income generation support and welfare programmes,” she says.

A comprehensive package can be run for such women through the existing system of Voluntary Counselling and Testing (VCT) centres, which are low-cost and needs only a few trained staff, says Bohara.

“Most of the remote villages don’t have VCTs and the few that exist are so poorly run that they hardly make a difference in the lives of these badly traumatised women,” said Ganashyam Bhandari from the HIV/AIDS Alliance, a non-governmental organisation.

Extreme poverty means that the women cannot afford to travel to CD4 count (immune strength testing) centres of which there are just 13 in the country, most of them in urban areas.

“We have been lobbying for travel allowances to be given to HIV positive people, especially those living in the remote areas, but we have not been successful,” Hemant Chandra Ojha, a senior NCASC official, told IPS.

“In this situation we have no choice but to try and survive somehow,” says Nani, leader of a group of widows living with HIV. “The government is not going to help us.

“We do have a united voice now,” says Nani, referring to her group, which resists social discrimination and has learned the value of standing together.