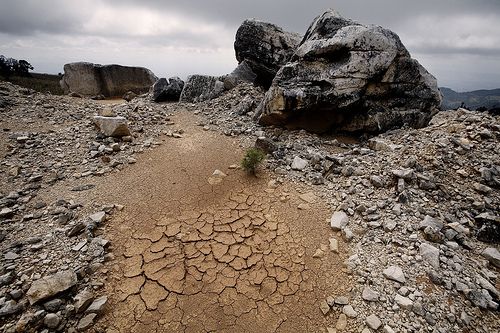 WASHINGTON, Apr 6 2012 (IPS) - One of the lesser-known catalysts of the 2011 Arab Spring uprisings was a global grain crop failure in 2010, caused by drought and flooding that year from Russia to Canada.

Low grain stores worldwide caused food prices to skyrocket, leaving millions in the Middle East – a net food-importing region – without the basic ability to put food on their table. It was yet another indication that environmental crises cannot be separated from socioeconomic ones.

Humanity is now outstripping its resource base at an unprecedented global scale, contributing to rapid species loss, deforestation, and a decrease in the planet’s ability to absorb our waste. The problems that arise from economic inequality, like food insecurity and a lack of access to clean water, are sharpened by ecological stress and resource limits.

Avoiding these problems requires reframing the ideas of wealth and prosperity. With the United Nations Conference on Sustainable Development taking place in Rio de Janeiro, Brazil, in June, this is the year to catalyse a move toward widespread sustainable prosperity.

“State of the World 2012: Moving toward Sustainable Prosperity”, a new report by the Worldwatch Institute, outlines the need for, and benefits of, a new approach to economic development.

As a result of globalisation, and the adoption of capitalism as the dominant economic model, societies across the world are now essentially mortgaging themselves both economically and ecologically.

While workers in many countries are forced to accept lower and lower wages to boost corporate profits, social norms pressure the very same people to acquire and consume more and more things. This serious contradiction has led to endless debt, and increased socioeconomic instability.

Environmental sustainability is ultimately impossible without social and economic equity. Employment at adequate incomes is key to making any economy work, and without this basic element, attempts by different countries to transition to a green economy have been met with disillusionment from the general public and a loss of credibility for government leaders.

Overdeveloped countries, including the United States, need to adopt a strategy of economic “degrowth” to limit ecological collapse and severe climate shifts. This does not mean stagnating economic development; it means cutting down on waste and overcoming the social pressure to accumulate material wealth at the expense of others’ well-being.

Corporations in the United States are now entitled to the same free- speech rights as individuals, while the majority of U.S. citizens have no say in how these same corporations operate. Improved economic democracy and participation are essential for a collaborative effort to slow unsustainable economic growth.

Many of the actions that societies can take to achieve degrowth will also boost their citizens’ physical and psychological health. These actions include creating walkable and bikeable communities, eating less and lower on the food chain, shrinking new-home sizes, and generally using less stuff: in 2010, U.S. citizens generated about 250 million tonnes of trash, or about 4.4 pounds of trash per person each day.

This need for degrowth in overdeveloped countries comes at a time when the poorest one-third of humanity still needs to considerably increase its daily consumption to achieve a decent quality of life. Only action from both industrialised and emerging economies will bring about an equitable and sustainable global prosperity.

The world’s consumer class will need to reduce its enormous claim on the Earth’s resources. And China, India, Brazil, and other rapidly developing countries will need to chart a different course toward prosperity than the one taken by countries that industrialized in the 19th and 20th centuries.

Japan is a world leader in pursuing prosperity that does not compromise environmental health. Drawing from its technological advances in recent decades, Japan’s Top Runner programme makes the most-efficient model of a given appliance the standard that every manufacturer must match.

This drives continuous innovation and improvement in energy efficiency, resulting in a kind of “leapfrogging” toward sustainability. Adopting the underlying idea to promote a global form of a Top Runner programme can be an effective tool in the pursuit of more sustainable economies everywhere.

And while the world’s population and economic output continue to shift to urban areas, policymakers need to focus on lifting the estimated 828 million urban poor out of slums or other unsanitary living conditions.

While reactive measures like food stamps and homeless shelters provide a necessary safety net for the urban poor, more proactive or preventative measures, like creating inclusive public transit systems, or improving access to fresh food and clean water in disadvantaged communities, would more effectively move cities toward the equitable societies they could be.

Societies around the world need to reorient their economies to not only prevent further degradation of the Earth’s systems, but also to actively restore these systems to health. Pursuing degrowth in overdeveloped countries provides the space needed to reduce the social and economic inequalities that keeps one billion people worldwide in conditions of chronic hunger while another billion are overweight or obese.

The paths to sustainable prosperity will look different in industrial and developing countries, but these paths will converge when both people and planet can thrive.

“State of the World 2012: Moving toward Sustainable Prosperity” will release Wednesday, April 11 at the Woman’s National Democratic Club in Washington, D.C.