BLANTRYE, Malawi, Apr 12 2012 (IPS) - As Malawians celebrate Joyce Banda’s appointment as president on sites, like Facebook and Twitter, the increased use of social media in Malawi comes full circle as her new government takes office. 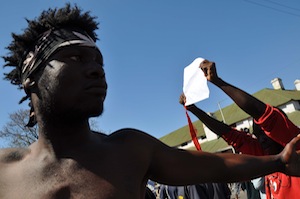 On Jul. 20, 2011, the peaceful country of Malawi broke out into nationwide anti-government protests. Credit: Katie Lin/IPS

For it was during the country’s civil society mobilisation against the former government that social media first gained popularity as a platform for airing grievances here.

Now, as Banda begins to purge the Malawian government of corrupt officials and woos international donors back in an attempt to ease the country’s economic woes, users on social media have increased.

The news of President Bingu wa Mutharika’s death began circulating as rumours on Facebook newsfeeds in Malawi two days before it was officially confirmed by government officials on Apr. 7.

The subsequent appointment of former Vice President Banda as the new head of state, and the first female president in southern Africa, only amplified the level of online activity as messages of support and optimism sprouted up all over Twitter and Facebook.

But the country’s online community was first stirred to action during last year’s protests. On Jul. 20, 2011, the apparently peaceful country of Malawi broke out into nationwide anti-government protests in response to a deteriorating economy and political mismanagement. Persistent fuel and foreign exchange shortages added to the frustrations.

The protests lasted two days and resulted in 20 deaths.

So when the Malawi Communications Regulatory Authority (MACRA) temporarily shut down private broadcasters and popular news websites were blocked, Malawians turned to social media platforms such as Facebook and Twitter for the latest information.

“However, social media has created a socially free and more politically aware population, which the government is helpless to control.”

According to the social media statistics portal, Socialbakers.com, there are currently 132,580 Facebook users in Malawi. While this represents less than one percent of the nation’s 15 million people, the number of Facebook users grew more than 50 percent between March 2011 and March 2012.

Such a remarkable surge in usage over a period of civil unrest indicates that social media has a place in Malawi, despite the country’s low internet penetration. In 2010, the International Telecommunications Union estimated that just 4.5 percent of Malawi’s population was using the internet, with access limited primarily by poor communications infrastructure.

As the days of protest unfolded, however, Malawians across the country took to cyberspace, posting photographs of wounded demonstrators and damaged property on Facebook; alerting protestors of volatile areas and describing the police presence at each location, through Twitter channels; and posting on Youtube cell phone videos documenting the chaos.

Some subscribed to pro-democracy Facebook groups. Others, like 28-year-old Rogers Siula, a media planner who participated in the July protests in Blantyre, took to the blogging sphere.

“We are in an environment where young people, who have incredible potential to flourish and steer Malawi into a dynamic, fresh and energetic country, are being oppressed left, right and centre,” says Siula.

It is this aspect of anonymity that social media offers which appeals to Malawians – but it is also that which affords government officials the ability to disguise their identity online and therefore more easily identify and monitor particularly outspoken individuals.

Malawi may have moved into a new year, but old tensions followed, giving rise to new controversies.

On Jan. 17, 2012, a group of market vendors in the country’s capital of Lilongwe stripped women wearing trousers and short skirts after the late Mutharika reportedly voiced concerns about how women were dressing.

Concerned citizens gathered online to condemn the vendors’ actions, including a group of women who launched the campaign, “Stop Violence Against Women in Malawi.”

They advertised in newspapers and on the radio, and also reached out to more than 5,000 people through Facebook – 1,413 of whom accepted an invitation to a peaceful sit-in, according to the group’s page.

More recently, the arbitrary arrest of prominent human rights lawyer, Ralph Kasambara, in February gained international attention through the emergence of support groups on Facebook, such as the “Free Ralph Kasambara” group, where supporters publicly deplored the persecution he faced.

Eight days after his arrest, Kasambara was released on bail. He credits social media with playing a pivotal role in his release.

“It brought the local problem into a global context, and as a result of that, our friends from the International Court of Justice were able to … get information as it was happening around here,” says Kasambara.

But social media is not just being used to fuel nationwide political action. On a smaller scale, it is also helping Malawi’s urban population tackle day-to-day battles, such as the ongoing struggle to locate fuel.

Frederick Bvalani is one of the co-founders of Malawi Fuel Watch (MFW), a Facebook group with over 7,400 members that shares information about the location and price of fuel in the country’s cities.

“The relatively low cost of communicating on the internet and the available audience on a forum like Facebook make it ideal for promoting change and connecting people that want to see a different and better Malawi,” says Bvalani.

For Billy Ngoma, 27, the benefits of MFW are obvious.

“You can spend six to eight hours in a long queue to get 25 litres of fuel,” he says. “The fuel watch group has helped those of us who use social networking so we know which gas station will have fuel.”

The future of social media in Malawi

From the online orchestration of the July protests to the buzz surrounding Mutharika’s death, it seems that social media is quickly gaining its bearings in Malawi.

However, the increased use of such speedy information-sharing platforms over the past year has also exposed some misuse of them.

Just as quickly as news of July protests and Mutharika’s death spread, so too did rumours and misinformation.

And on the part of the media, Munthali explains that BNL was simply unprepared to respond to the online community by the time the need to do so arose during the July protests.

“Our initiative was poorly marketed – apart from the feed from our reporters via text messages, we had few else to rely on as our Facebook and Twitter followers were not impressive.”

But such shortcomings are not enough to make the media shy away from embracing these widely used social platforms.

Nor is the threat of censorship.

“With the traditional media constantly hounded by unpopular laws enacted and enforced by the Malawi government, we intend to enhance our online presence by becoming more interactive with our audience,” he says.

And the means by which Malawians might engage with social media are improving. Since 2009, the MACRA has been rolling out Information and Communications Technology centres across the country. This initiative, alongside the installation of fibre optic cables in urban centres by Malawi Telecommunications Limited and the increased use of cell phones, will undoubtedly affect internet usage, and therefore, information access, in both rural and urban areas.

As President Banda transitions into her new role and the challenges that the country faces persist, it is still too early to know what effects this change will have – but Malawians will, no doubt, be talking about it online.

“There is something about the internet that gives people boldness to speak their mind – people are connecting, sharing stories and ideas,” Bvalani says. “Others who have suffered in silence speak out.”

“Social media has given Malawians a platform to have a voice.”