WASHINGTON, Apr 3 2012 (IPS) - In a memorandum released Tuesday, President Barack Obama ordered the State Department to allocate additional humanitarian assistance funds for Sudan as famine looms for thousands of civilians caught between intensified levels of armed conflict along the borders of Sudan and South Sudan. 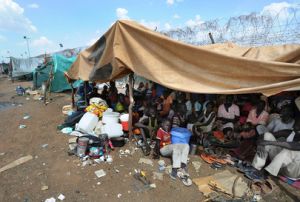 “It is important to the national interest to furnish assistance under the (Migration and Refugee Assistance) Act, in amount not to exceed 26 million (dollars) from the United States Emergency Refugee and Migration Assistance Fund, for the purpose of meeting unexpected and urgent refugee and migration needs…in South Kordofan and Blue Nile States of Sudan,” the memo stated.

In light of the most violent escalation in tensions between Sudan and South Sudan since the two countries split last year, the Obama administration on Monday voiced concern over the implications of continued fighting for a settlement on a variety of divisive issues by urging South Sudanese President Salva Kiir to end hostilities.

While emphasising the need to end fighting over disputed border regions, particularly in South Kordofan, President Obama noted that an agreement over oil transportation fees – a hotly contested issue between the two governments – will be “important”.

“(I)t’s important not only to encourage the governments to reach an agreement on oil, but to reach an agreement on the issues that are dividing them so sharply and creating so much conflict,” Ambassador Princeton Lyman, U.S. special envoy to Sudan and South Sudan, said in a teleconference on Monday, “We all need to engage in a broad diplomatic effort, not just on one issue.”

President Kiir and Sudanese President Omar al-Bashir were set to meet this week until the recent spate of violence, which has included clashes between ground forces and aerial attacks in a number of contested border states including South Kordofan and Blue Nile, diminished the chances for a peace summit.

While U.S. policymakers and the U.N. Security Council continue to press for maximal “restraint” on both sides, some analysts have argued that holding both the Khartoum and Juba governments equally accountable for the most recent surge in violence actually works to discredit the international community’s ostensible role as impartial mediators, and helps to perpetuate the conflict.

“It must be stressed that there is no publicly available evidence that the South is providing significant assistance to the Sudan People’s Liberation Army-North or indeed the means to do so. International failure to acknowledge this dramatic asymmetry only encourages Khartoum to continue arming militias operating in the South,” Dr. Eric Reeves, a regional specialist, wrote on his blog sudanreeves.org last week.

Several regional observers have suggested that hard-line factions within the Sudanese government have everything to gain from continuing the armed conflict, both because of lost territory, oil production capacity, and warrants for their arrest issued by the International Criminal Court.

Nevertheless, others see an impartial posture for the U.S. and international community as essential to diplomatic mediations.

“Would-be mediators should resist the temptation to look for the ‘good guys’ in Sudan and take sides,” Alan Goulty and Nuredin Satti, two regional specialists, wrote in a report last month published by the Woodrow Wilson Center for International Affairs.

“The parties to Sudanese conflicts need help to make peace, not war. It follows that the secondary temptation of bringing pressure or leverage to bear on only one of the parties should also be resisted. It will lead the antagonists to eschew negotiation in favor of waiting for outside pressure to weaken their opponents,” the report goes on to say.

In addition to last week’s armed clashes and the ongoing oil dispute, the governments in the north and south have yet to form a consensus on other significant issues such granting humanitarian relief agencies access to distressed populations, some that are on the verge of starvation, border demarcation, and the citizenship status of displaced persons.

“The highest priority of the U.S. government is to get a humanitarian relief corridor open and that means you have to get an agreement between both the north and the south. And that effectively means a cessation of hostilities,” David Shinn, former U.S. ambassador to Ethiopia, told IPS.

“The problems are coming form both sides. This is not just all the north that is creating the problems,” Ambassador Lyman added.

Last month, U.S. lawmakers introduced new legislation that would require a “comprehensive” U.S. strategy for Sudan to encourage the use of a number of policy tools, including additional sanctions, to help pressure both sides into finding a peaceful solution.

Of particular concern for politicians here, however, are increasing oil prices in the middle of a crucial election year.

“Global oil prices are set by a variety of factors, many of which are outside of the control of U.S. policy,” a senior administration official said in a conference call on Monday.

“(A)s the president has talked about on several occasions, factors that are influencing oil prices right now include growth in countries around the world as well as disruptions in supply in countries across the globe from Sudan to Yemen to Nigeria,” the official added.

With continued disagreement over the price for transporting South Sudanese oil through the north, which owns the vital pipelines and infrastructure necessary for export to the Red Sea, Juba now faces large shortfalls in government revenues. Before shutting down exports, South Sudan’s estimated 345,000 barrel per day oil capacity accounted for 98 percent of government revenues.

“(W)e’re obviously interested in reducing tensions there, and certainly in trying to mitigate the factors that are having an impact on high oil prices,” Jay Carney, White House press secretary, said in a briefing last week.

China, which imported roughly 67 percent of Sudanese oil before supplies were disrupted, and other major Asian importers are now seen as crucial to an all-inclusive diplomatic push toward resolving the multiplicity of conflicts.

“(B)oth China and India have significant investments in the oil sector. And as a result, they both have an interest in a stable and peaceful relationship between the two countries because, as you know, much of the oil is in the south, the infrastructure to export it in the north,” Ambassador Lyman said Monday.