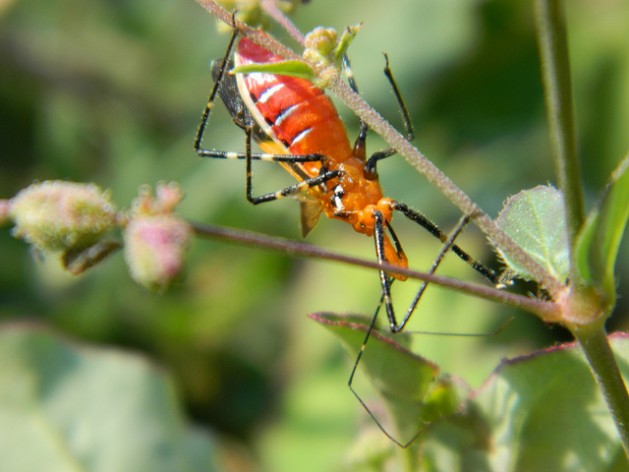 KINGSTON, May 11 2012 (IPS) - Jamaican authorities are going all out to achieve environmental sustainability as one way of minimising the expected impacts of climate change on the local biodiversity.

There is no up-to-date inventory of the island’s flora and fauna, and a shortage of adequate data collection devices, which researchers say are needed to begin climate impact studies and adaptation planning in ecosystems management.

But, by working toward the seventh Millennium Development Goal (MDG) – a series of development and anti-poverty targets agreed by U.N. member states in 2000 – authorities hope to establish the principles of sustainable development across all sectors to reduce environmental degradation, reverse the loss of environmental resources, and significantly reduce the rate of biodiversity loss.

Ecosystems Manager at the National Environment and Planning Agency (NEPA) Andrea Donaldson told IPS that while the agency’s work on biodiversity is not focused on climate change, they are aware of the likely impacts and continue to implement measures to safeguard the local biological diversity.

The National MDG Report has pointed to the country’s failures in efforts at pollution controls and the protection of critical ecosystems, and it is these factors that worry scientists the most.

In addition, human activities that result in deforestation, destruction of wetlands and coastal ecosystems, urban sprawl as well as disregard for the natural environment have been identified as some of the most serious threats to biodiversity.

In fact, experts are concerned that disregard for the natural environment could exacerbate the impacts of severe weather. Both the 2010 State of the Environment Report (SOE) and the National Report to the United Nations Framework Convention on Climate Change (UNFCCC) pointed to human activities as significant threats.

“Climate change is likely to further increase the negative impacts” of habitat loss, over-exploitation, poor land use and ignorance about the value of natural resources, the SOE reported.

Some experts are already describing changes in coral reefs, forests and coastal wetlands, areas that have been identified as most vulnerable to climate change. It is widely believed that with more than 12 extreme weather events in the last five years, Jamaica is already feeling the effects.

This is the most bio-endemic island in the region. Ranking fifth amongst islands of the world for the number of unique species, Jamaica’s biodiversity losses could be immense. There are more than 8,000 recorded species of plants and animals and more than 3,500 marine species here.

Among the island’s endemic treasures are 10 species of cacti, seven species of palms and 60 of the 240 species of orchids. There are 31 endemic species of birds, nine species of crabs, 505 species of the 514 varieties of land snails, and 33 of the 43 species of reptiles.

At least four of the 24 species of bats here are endemic; 17 of the 19 species of frogs and about 15 of the 115 species of butterflies.

Among the better-known unique species are the Tody, the Jamaican boa, the Jamaican Hutia also called the coney and the Giant Swallowtail Butterfly.

The island ranks among the International Union for the Conservation of Nature (IUCN) list of places with the highest number of at-risk mammals, due primarily to the threat to its endemic bats and the coney.

Another of the island’s endemic species, the Jamaican iguana, is on the IUCN’s Red List of endangered and threatened species. Roughly 200 of the animals survive in the shrinking limestone forests of Hillshire, several miles outside the capital Kingston.

And as the impacts of fewer but more intense rainy days, increased intensity of hurricanes, and periodic drought take their toll, socioeconomic problems are expected to increase the pressure on natural resources.

As the agency charged with safeguarding the island’s biological treasures, NEPA said it has spearheaded a number of policies, programmes and legislation to manage and prevent unauthorised exploitation.

Its managers admit, however, that enforcement has been difficult so like the Forestry Department, NEPA is making the impacted communities its allies. Adaptation funding has enabled both agencies to replant the forests and coastal wetlands. At the same time, they are working with fishers, farmers and others whose livelihoods depend on the natural ecosystems to find other income-generating opportunities.

“We are trying to install data loggers to collect information on sea water surface temperature among other things,” Donaldson noted. “While we do regular reef checks, I can’t say as a fact that any changes we see are from climate change.”

NEPA’s data loggers should provide the Jamaica Clearing House Mechanism (CHM) with information that would be useful in studying the impact of climate change on its vast though outdated databases of plants and animals, biologist Keron Campbell said.

“We are updating the baseline data, the inventories of plant and animal species and this is needed to track any changes,” Campbell told IPS, noting that data-loggers along with ongoing field studies and temperature information from the meteorological service will provide valuable data for adaptation planning.

Jamaica’s Natural History Museum, which houses the CHM, holds 110,000 zoological specimens and a herbarium of 130,000 plant specimens dating back to the 1870s. The CHM is part of an international network and is the result of Jamaica’s commitment under the U.N. Convention on Biological Diversity.

Donaldson also pointed to charcoal burning, farming, solid waste disposal in fresh water sources and coastal areas, and improper fishing methods including the use of chemicals as some of the most prevalent and worrying factors that impact biodiversity.

The SOE reported that scientists are also seeing changes in the Portland Bight, the island’s largest nature reserve. It is also the only known habitat of the Jamaican iguana.

Dr. Byron Wilson, head of the University of the West Indies Iguana programme, noted that the continued survival of the iguana is due primarily to the remoteness of its habitat. Efforts to build a colony on Goat Island just off the coast failed, he said, making the Hellishire Hills one of the world’s most important natural habitats.

But development is now making the area more accessible. It was a pig hunter who rediscovered the iguana that had been thought extinct for more than 30 years.

NEPA’s wildlife specialist Ricardo Miller noted that the most significant changes during the annual game birds survey is the rate of development.

“I have had to change my sampling routes due to developmental changes. Some of the best birding trails are being replaced by houses,” he said.

Jamaica’s climate change preparations began in 1997 with Caribbean Planning for Adaptation to Global Climate Change (CPACC) under CARICOM (the regional Caribbean Community bloc). The programme initiated among other things the design strategies and databases for climate change adaptation in a number of areas.

If the science is correct, Donaldson said, climate change will result in the inundation of costal areas, loss of habitat and the dying off of some species. Others, she added, may very well adapt.