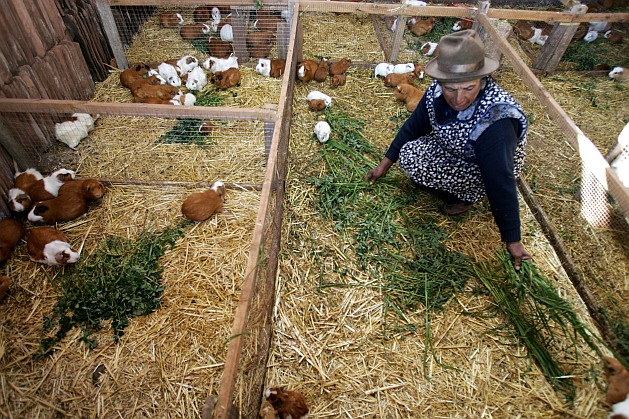 SANTIAGO, May 11 2012 (IPS) - A new report takes a close look at the territorial distribution of poverty and inequality in Latin America, which has long had a reputation of being the most unequal region in the world.

The Latin American Report on Poverty and Inequality 2011, presented this week by the Latin American Centre for Rural Development (RIMISP), notes that rural areas and indigenous and black populations are hit hardest by inequality.

It also points out that the huge disparities in development levels within the countries of Latin America are one of the aspects of inequality that have received the least attention.

“In Latin America, one’s place of birth or residence is not a minor issue because it determines both socio-economic conditions and opportunities to access the goods that guarantee wellbeing,” the report says.

“This is true of entire countries and areas within them. The region is home to countries that have achieved greater levels of growth, but that growth is concentrated in a limited number of territories,” it adds.

“One of the most consistent findings was that in practically all countries of the region, the same inequalities and the same gaps are repeated in the same kinds of territories,” Ignacia Fernández, who coordinated the study, told IPS.

“The exception is in terms of income inequality and citizen insecurity, which most heavily affect densely populated urban (slum) territories,” added Fernández, who holds a doctorate in sociology from the University of Barcelona in Spain.

The report says that because the average statistics of socioeconomic indicators for each country hide major variations between urban and rural areas, they fail to adequately inform the design and implementation of public policies aimed at reducing poverty and inequality.

As a result, there are public policies that instead of helping to come up with solutions, actually aggravate the problem of inequality.

“What the tyranny of averages does in the end is hide significant differences,” Fernández said. “One case in point is Chile, which in general has a good average with respect to the rest of the region. But it has districts with indicators similar to those of Nigeria, and others that are like Switzerland. There are huge disparities that are normally not seen.”

And public policies and solutions tend to be designed with the averages in mind, she added.

Pablo González, the economist who coordinated the 2010 UNDP National Human Development Report on Chile, called for public policy-makers to keep the needs of different territories in mind, and to generate development-oriented proposals with input from people on their specific needs.

“We are in one of the continents that exhibit the greatest inequality in the world, along with the countries of southern Africa, and that inequality varies, from places in the region that are comparable to the most developed parts of the world, to other places that are at levels comparable to the most backward regions,” the UNDP (U.N. Development Programme) official told IPS.

González said top-down policy-making that fails to take into account the particularities of each specific part of the territory and the population should be avoided. He recommended bottom-up policies and management, focused on specific units of territory, and said there were successful international experiences in this respect.

“The complex policy issues of the future have to be handled this way, and not with a limited sectoral focus. Issues like gender equality, for example, require a multisectoral effort, and the unit that has comparative advantages for doing this is the territory,” he said.

Although these initiatives have different purposes and scopes, they all have one thing in common: while the overall results have been positive, “when they are assessed in a spatially disaggregated manner, we find significant inequalities in their results and impacts,” the report says.

In practice, “the problem ends up being aggravated, because the solutions are not tailored to specific, particular problems” that vary from area to area within a country, Fernández said.

For example, “If you look at aggregate statistics from Mexico in the last 20 years, inequality in general, and in urban areas, has declined, while rural inequality has increased, despite resources dedicated to a programme specifically targeting the rural sector,” she said.

In contrast, the study cites two examples of local administration that have successfully managed to fight poverty: the Sierra Sur Project, in Peru’s southern Andean highlands, and the Land of Solidarity initiative in southern Santander, a province in northeastern Colombia.

The Sierra Sur project, which got underway in 2005 with financing from the International Fund for Agricultural Development (IFAD), supports hundreds of small farmer organisations and networks involved in efforts to improve the quality of production of natural resources and strengthen rural business initiatives, through transparent, local programmes based on community participation.

The Land of Solidarity programme, meanwhile, covers 52 municipalities in the province of Santander, where a solidarity economy has grown up on the basis of a strong social, cultural and economic tradition of cooperatives, which began to emerge in the 1960s under the influence of Catholic Church social outreach efforts.

González said “both models are interesting to study.” In his opinion, it is a matter of “going beyond approaches that emphasise unidimensional questions, such as income, efficiency, or even the way poverty is traditionally measured.”

“It is necessary to ask people what they care about, and what results they want to see,” in order to “give new legitimacy to political action and public policies,” he said.