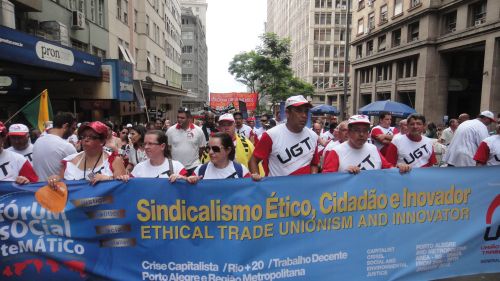 UNITED NATIONS, May 7 2012 (IPS) - After two weeks of closed door negotiations, a U.N. preparatory committee (PrepCom) has failed to reach consensus on a global plan of action, titled “The Future We Want,” to be adopted by a summit meeting of world leaders mid-June in Brazil.

The negotiators, comprising representatives of all 193 member states, proclaimed limited success, including reducing the size of the action plan – formally called the “outcome document” – from nearly 200 to less than 100 pages.

The document, called the “zero draft”, originally ran to more than 6,000 pages of submissions by member states, international organisations and civil society groups.

Still, after protracted negotiations ending last Friday, Ambassador Kim Sook of South Korea, one of the co-chairs of the PrepCom, said delegates had expressed “disappointment and frustration at the lack of progress” on reaching agreement on a plan aimed at a greener economy and a sustainable future.

In an effort to break the deadlock, the PrepCom will give another shot at the zero draft when it holds an unscheduled five-day session beginning May 29.

This will be a last ditch attempt to finalise the draft action plan, which has to be ready for approval by world leaders arriving in Rio de Janeiro for the three-day summit, beginning Jun. 20.

If it fails to reach consensus, negotiations will be resumed in Brazil Jun. 13-15 in a do-or-die attempt to finalise it before the three-day summit Jun. 20-22, officially called the U.N. Conference on Sustainable Development (UNCSD)

The summit will be the culmination of the UNCSD, also called Rio+20, a follow-up to the landmark 1992 Earth Summit in Brazil which adopted Agenda 21 and the Rio Declaration on Environment and Development.

“Let us be frank,” UNCSD Secretary-General Sha Zukang said Friday, “currently, the negotiating text is a far cry from the ‘focused political document’ called for by the General Assembly.”

He said the objective should be to arrive in Rio “with at least 90 percent of the text ready, and only the most difficult 10 percent left to be negotiated there at the highest political levels”.

However, a statement released Friday by a coalition of international non-governmental organisations (NGOs) warned that Rio+20 “looks set to add almost nothing to global efforts to deliver sustainable development”.

“Too many governments are using or allowing the talks to undermine established human rights and agreed principles such as equity, precaution, and polluter pays,” it said.

Antonio Hill of Oxfam said, “After four months of talks on the so- called zero draft outcome document, the Rio+20 talks are stuck at zero.”

He said little or nothing has emerged that will deliver on what governments agreed was needed 20 years ago at the Earth Summit.

Asked about the sticking points in the negotiating process, Zeenat Niazi, senior programme director at the India-based Development Alternatives Group, told IPS there was disagreement over the concept of green economy and “its relevance and meaning to the Global South – concerns of green associated with the creation of sustainable livelihoods”.

She pointed out that other areas of disagreement include: issues of equity; sustainable consumption and production in the Global North; social justice, especially related to resource extraction from developing and least developed countries; technology transfer and trade.

Additionally, there were also disputes relating to Sustainable Development Goals (SDGs) and how they deal with “the integration across the three pillars of sustainability, and not becoming a long laundry list”.

“And what kind of commitments will nations need to make, and the readiness for them, and the building up of national capacities to facilitate the inclusion of SDGs in national development plans and priorities?” Niazi said.

Asked whether an additional week of negotiations will make any significant difference to the outcome document, Niazi told IPS, “It could, if there are spaces created to include the voices of civil society, and integrate the same in the outcome document and outline an inclusive road map to design the post-Rio+20 action plans.”

In a statement released Friday, the United Nations identified some of the contentious issues which prevented agreement on the outcome document.

Some developed countries, the statement said, have embraced the green economy as a new roadmap for sustainable development, while many developing countries are more cautious, asserting that each country should choose its own path to a sustainable future and that a green economy approach should not lead to green protectionism or limit growth and poverty eradication.

Other countries and stakeholders, it said, have voiced concerns about implementation and accountability, pointing out that some commitments made at previous global meetings, such as for official development assistance (ODA), have yet to be fully realised.

Nonetheless, says the statement, virtually all countries appear willing to agree on a number of issues, including the overall need to recognise and act to meet pressing global and national challenges.

“It has been widely acknowledged that action is needed to provide for the needs of a growing global population that continues to consume and produce unsustainably, resulting in rising carbon emissions, degraded natural ecosystems and growing income inequality.”

The need to find a better measurement of progress than gross domestic product (GDP) has also been widely acknowledged.

The statement further said that countries have also been examining the concept of new Sustainable Development Goals, a set of benchmarks to guide them in achieving targeted outcomes within a specific time period, such as on access to sustainable energy and clean water for all.

But some countries have differing views on what should or should not be included in the goals, as well as the formal process for how and when the goals may be defined, finalised and agreed to.