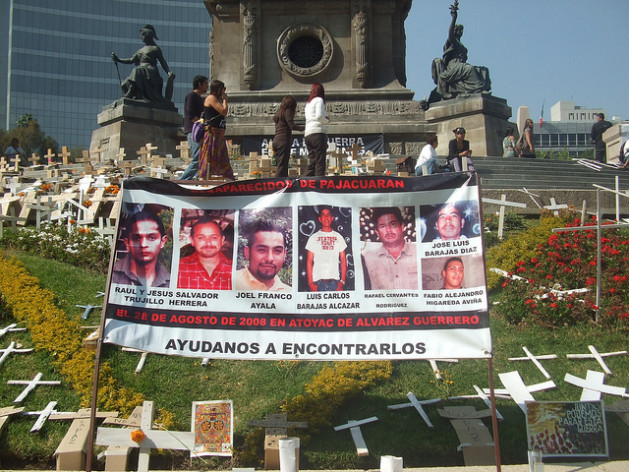 MEXICO CITY, Jun 7 2012 (IPS) - Since the forced disappearance of his son Jethro in May 2011, Héctor Sánchez has found an outlet for his grief in activism. So far he has turned down psychological support offered by the Mexican Attorney-General’s Office and human rights organisations.

“I cope by keeping very busy with the school project. That’s how we channel our painful feelings,” said the 59-year-old owner of an automobile parts business.

Jethro Sánchez, an electromechanical engineer, was arrested by municipal police in the city of Cuernavaca, 90 km south of Mexico City, on suspicion of belonging to a criminal organisation. Then he was handed over to soldiers, who tortured and killed him.

His body was found in August 2011, and three members of the military are now in custody awaiting trial for the crime.

Experts say post-traumatic stress disorder (PTSD) and acute depression are on the rise in Mexico as a result of the increasing violence seen over the last few years. Scientists have evidence that communities and soldiers involved in armed conflict – among regular or irregular armed groups – are exposed to PTSD, a severe health problem.

“This disorder is spreading rapidly in populations like that of the capital and other cities in Mexico, where PTSD levels associated with violence are already high. We find similar patterns: people’s stress levels are directly proportional to their exposure to the mass media,” which transmit terror and panic, Mauricio Meschoulam, an academic at the Jesuit-run Ibero-American University, told IPS.

Meschoulam, an expert on terrorism, peace-building and mediation, co-authored a study that assessed the prevalence of PTSD in Mexico, which is caught up in a spiral of drug-related violence aggravated by the government’s militarisation of the country.

Based on 333 replies to a questionnaire, from respondents in 15 of the country’s 32 states, the “Estudio sobre efectos psicosociales por violencia en México” (Study on Psychosocial Effects of Violence in Mexico) found that 51 percent of those interviewed said the violence affected their work life, 72 percent their social life and 58 percent their family life.

Moreover, 42 percent of the sample said the violence had an impact on their economic status and 60 percent reported that it had affected their mental health.

The survey recorded symptoms of various disorders, like frequent anxiety attacks, frequent insomnia, and feelings of irritability and despair.

The survey participants are exposed, like the rest of Mexican society, to the daily scenes of terror splashed across newspapers, blaring from television screens and circulating in cyberspace through the social networks and blogs.

The violence began to escalate after President Felipe Calderón took office Dec. 1, 2006 and immediately deployed the armed forces in the battle against the drug cartels.

After nearly six years, the success of the strategy is doubtful, as more than 50,000 people have been killed, 250,000 displaced from their homes, 10,000 disappeared and 8,000 orphaned, according to human rights organisations.

At first the hardest hit communities with the highest levels of PTSD were found in the outlying states where the cartels are powerful. But the psychosocial damage has spread beyond those areas due to the heavy media coverage.

The disorder can occur when an individual directly experiences assault, kidnapping, rape or natural disaster.

However, “not only the direct victims of criminal acts are at risk of this kind of disorder, but also their communities, neighbours and relatives,” Edith Zúñiga, the academic director and founder in 1998 of Tech Palewi (which roughly translates as “I support you and help you grow” in the Nahuatl language), told IPS.

“Reporters who experience the thick of the battle can get PTSD,” she added.

“People have tried to pass off the violence as normal, and it has not been given the importance it deserves. Attention has not been given to the mental health risks that are incurred. Early intervention is important, but not enough people are diagnosed,” she said.

The Attorney-General’s Office records at least 2,886 police officers killed since 2006, while the armed forces report at least 250 fatalities among soldiers. Military personnel have been attacked nearly 2,000 times.

“The costs are high. For instance, soldiers’ families know when the troops go away on an operation, but they don’t know when they’ll come back,” Jorge Álvarez, head of a crisis intervention programme for victims of natural and social disasters at the National Autonomous University of Mexico (UNAM), told IPS.

“Moreover, they (police and military) are accused of many human rights violations, so people do not trust them,” he said.

Created in 1997, the UNAM programme trains people like firefighters, rescue workers and soldiers in psychological first aid, and helps victims and their families.

Six researchers from the state Autonomous University of Chihuahua and the Chihuahua Children’s Hospital authored the study, which reviewed 125 PTSD patients treated by the child psychology department over a period of three months. Of these, 52 had been traumatised by violence and 73 by accidents.

The patients were aged 5 to 15, and the highest prevalence was in the 5 to 7 year age group.

Psychological support “should be a priority. First of all those responsible should be brought to justice and there should be an end to impunity. Then we ought to think about psychological treatment,” said Sánchez, who will open a school specialising in auto mechanics, named after his son, on Jun. 18.

“It is essential to work with vulnerable populations. I think the state’s response is too slow and it is failing to detect the problem in a comprehensive way,” said Meschoulam.

He said he intends to continue carrying out national surveys and research on the effects of violence, to assess the needs of at-risk groups (children, women, police, soldiers and journalists), reduce hurdles for access to health care, and train personnel.

Zúñiga said “This kind of care needs to become more widely available, because the losses are so painful. We want to train people in the states, so as to form human resources who can make positive interventions in circumstances of this kind.”