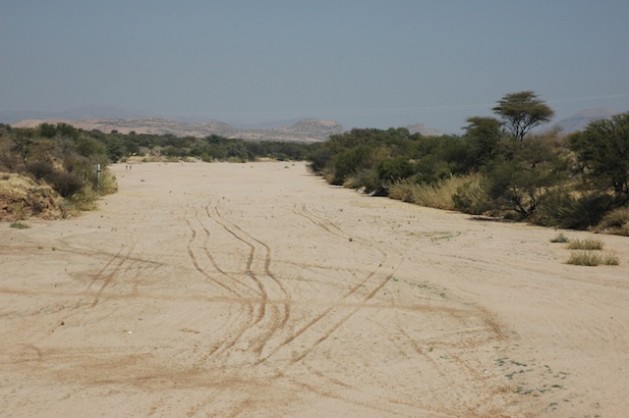 Namibia’s Omaruru River runs dry for much of the year, but along with the aquifers it feeds is a vital source of water for a wide area. Credit:Servaas van den Bosch/IPS

The Kunene Transboundary Water Supply Project is a good model of trans-boundary cooperation in the Southern Africa Development Community (SADC). The KTWSP will improve the water supply for around 700,000 residents of southern Angola and northern Namibia, providing for domestic consumption, irrigation, and industry.

The project includes the rehabilitation of the Calueqe Dam in southern Angola, which suffered extensive damage during the country’s 27 years of civil war. So far, some 35 million dollars have been invested in the project, which is being funded by the Namibian and Angola governments and contributions from the UK, the German Development Bank and Australia.

Dr Kuiri Tjipangandjara, an engineer at the Namibia Water Corporation (NamWater) and co-Chair of the KTWSP, told IPS that construction of a new pipeline between the southern Angola towns of Xangongo and Ondjiva has already begun. This link will supply treated water to various towns and villages along its route, such as Namacunde, Santa-Clara and Chiedi.

Designs for the network to distribute water within and around Ondjiva are in progress, as are plans for another bulk water pipeline linking Santa Clara to the Namibian town of Oshakati.

Tjipangandjara said Angola has also begun setting up a water utility for the Kunene region.

“There was nothing in place before, and it takes time to set up such a utility and other facilities of the project,” he said.

Numerous design and feasibility studies must be conducted and approved by all involved parties: Angola, Namibia, SADC and the German Development Bank.

“Of course it will be a state-owned utility,” he said, but he did not venture to predict if it would eventually operate on a cost-recovery basis like NamWater, explaining that each country designs its own policies – dictated by the reality on the ground and by history.

The next phase of the project will look at replacing the open canal that runs for 150 kilometres between Calueqe and the Namibian town of Oshakati with a pipeline.

The open canal currently faces a number of challenges. During the rainy season, it is frequently damaged by floods and Tjipangandjara said people living along the canal not only freely draw water without permission – the occasional drowning has been reported – but some locals have also vandalised it. He explained that repairing this damage costs NamWater dearly in terms of maintenance.

He said replacing the canal with a pipeline will also eliminate losses through evaporation. “Seventy-six percent of the water that we pump from Calueqe into the canal is lost to evaporation,” Tjipangandjara told IPS.

Modestus Amutse is the councillor for Oshikuku constituency in the Omusati region through which the canal runs.

He told IPS that the KTWSP is a good initiative, but warned that replacing the open waterway with a pipeline could deny villagers access to water for irrigation and for their livestock. “This project will only be good if it is responsive to the needs of the people,” he said.

While he agreed that the canal lost water through evaporation, he stressed that many of his constituents were unemployed and could not afford to pay for water at communal access points. But, he said, they needed access to water for their gardens and livestock.

Tjipangandjara disagreed. “The current off-take of water from the canal is not approved by NamWater and is not managed.”

He suggested water should only be drawn at designated points. “It should be regulated and properly managed. The current practice is not correct.”

Tjipangandjara said that undertaking the KTWSP has improved understanding of the water supply in Namibia and Angola, and strengthened management of the Kunene River basin, including providing access to badly needed funds for infrastructure.