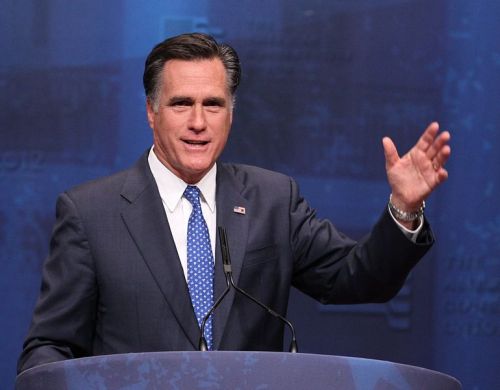 Speaking before the traditionally hawkish Veterans of Foreign Wars (VFW), Romney accused Obama of “abandon(ing)” U.S. allies, particularly Israel, and described the possibility of a nuclear-armed Iran as “the most severe security threat facing America and our friends”.

He also called the alleged leaking by the administration of details of highly secret operations, such as last year’s killing by U.S. Special Forces of Al-Qaeda chief Osama bin Laden, “contemptible” and charged that Obama was putting the country in danger by pursuing “radical cuts in the military”.

“The president’s policies have made it harder to recover from the deepest recession in 70 years, exposed the military to cuts that no one can justify, compromised our national-security secrets, and, in dealing with other nations, given trust where it is not earned, insult where it is not deserved, and apology where it is not due,” Romney asserted in what was one of his biggest applause lines.

But critics said they were struck by the absence of specifics and, in some cases, the failure to draw clear differences between him and the president on specific policy issues.

“Both Republicans and Democrats have been waiting for this speech for a long time, calling on him to be policy-specific,” noted Heather Hurlburt, executive director of the National Security Network, a think tank close to the Democratic Party. “What he offered was a lot of neo-conservative rhetoric and still few or no policy specifics.”

The speech, delivered on the eve of what is almost certain to be his campaign’s only overseas trip, comes amidst growing speculation over which faction in the Republican Party foreign policy establishment enjoys greater influence over a presidential candidate whose international expertise has been limited largely to his overseas financial investments and running the 2002 Salt Lake City Winter Olympics.

While Republican realists, such as former secretaries of state Henry Kissinger, James Baker, and George Shultz, are listed among his senior advisers, the most active members of his foreign policy team are identified more with the party’s staunchly pro-Israel neo-conservative and aggressive nationalist wing that dominated George W. Bush’s first term in office.

Judging from the rhetorical flourishes, tone, and some of the policy positions, especially regarding Israel and Iran, it appears clear that the more-hawkish wing of the party remains dominant, with some commentators noting that the speech appeared directed more at the party’s right-wing base than at independents who are likely to decide the election outcome.

Indeed, toward the beginning of his remarks, he reprised the main theme of the major foreign policy address he delivered at a military academy last October in the heat of the primary campaign: “This century must be an American Century,” in which “…we have the strongest economy and the strongest military in the world.”

The “American Century” phrase, which he repeated seven times, harks back to the Project for the New American Century (PNAC), a mainly neo-conservative group whose charter members in 1997 included, among others, Bush’s future vice president, Dick Cheney, defence secretary Donald Rumsfeld, and Middle East aide Elliott Abrams, as well as its two co-founders, Robert Kagan and William Kristol.

While PNAC, which played a key role in mobilising support for the 2003 invasion of Iraq, faded away by 2005, Kagan and Kristol created a new group, the Foreign Policy Initiative (FPI) shortly after Obama’s inauguration, and at least two of its five directors – former Pentagon undersecretary Eric Edelman and the former spokesman for the Coalition Provisional Authority in Iraq, Dan Senor – have taken prominent public roles in the Romney campaign.

Similarly, the choice of Romney’s foreign destinations over the next week – Britain, Poland, and Israel, where he will celebrate the breaking of the fast for Tisha B’Av, the day commemorating the destruction of the first and second temples in Jerusalem, at Prime Minister Benjamin Netanyahu’s house – also suggested a strong neo-conservative influence.

In Poland, he will meet with the leader of the Solidarity movement, former President Lech Walesa, long a neo-conservative favourite for his hostility to both the Soviet Union and Russia.

In his remarks Tuesday, Romney said that he would not attack Obama’s policy during his trip abroad but decried what he called the administration’s “shabby treatment” of Israel, accusing Obama of joining “the chorus of accusations, threats and insults at the United Nations” inflicted on the Jewish state.

Remarkably, however, he had nothing more to say about what policies he would pursue with Russia, which he described as the U.S.’s “number one geo-political foe” only three months ago. Nor did he say anything more about Syria, currently the hottest foreign policy topic in Washington, with FPI and other neo-conservatives arguing with growing urgency for the U.S. to intervene militarily.

On the other hand, Romney focused a lot of his rhetorical fire on Iran, which he described as a “catastrophic threat”, insisting “(t)here is no greater danger in the world today than the prospect of the ayatollahs in Tehran possessing nuclear weapons capability.”

But, aside from calling for full enforcement of sanctions “without exception”, his policy recommendations regarding negotiations over Iran’s nuclear programme appeared somewhat ambiguous.

“Negotiations must secure full and unhindered access for inspections,” he said, adding that “(t)here must be a full suspension of any enrichment, period.”

Both the notion of future inspections and the use of the word “suspension”, as opposed to permanent abandonment, to describe an acceptable negotiated outcome suggested that Romney may be open to a settlement that would not preclude limited future enrichment – a position consistent with that of the Obama administration.

Elsewhere in the Middle East, Romney said, the U.S. “cannot be neutral in the outcome there”, adding, “We must clearly stand for the values of representative government, economic opportunity, and human rights. And we must stand against the extension of Iranian or jihadist influence.”

But the only specific example he cited was Egypt, which he described as “at the centre of this historical drama”. He said he would condition U.S. assistance on the country’s commitment to representative government and peace with Israel and throughout the region. He did not explain, however, how this differs from current U.S. policy.

He criticised China’s alleged disregard for the rights of its people, as well as its trade and currency policies, but noted that “it is in our mutual interest for China to be a partner for a stable and secure world.” One commentator, Daniel Drezner of foreignpolicy.com, noted that the latter phrase was “the nicest thing Romney has said about China during the campaign.”

While he did not repeat his threat to declare China a currency manipulator on his first day on his office, he stressed that “the cheating must finally be brought to a stop. President Obama hasn’t done it and won’t do it. I will,” he said.

Besides U.S. policy toward the civil war in Syria, Hurlburt noted, Romney failed to address several key foreign policy issues, including the ongoing European economic crisis and Obama’s “pivot” of U.S. global strategy from the Greater Middle East to the Asia/Pacific region. “These are major challenges,” she said, “and he had nothing to say about them.”

Africa went entirely unmentioned, and his only nod to Latin America was a reference to the Middle East – mocking Obama’s recent assertion that Venezuelan President Hugo Chavez had not had a serious national security impact on the U.S. “In my view, inviting (Lebanon’s) Hezbollah into our hemisphere is severe, serious, and a threat,” he said.