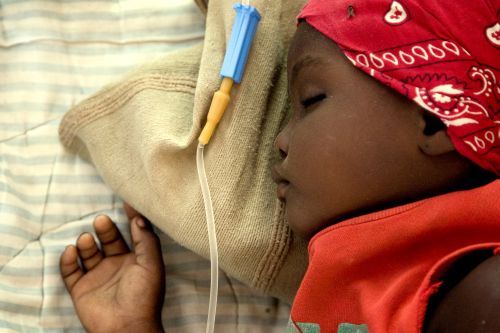 An infected child resting on the floor of the Doin medical centre near Saint Marc, a town in the Artibonite Region, where UNICEF has worked to contain the cholera outbreak. Credit: UN Photo/UNICEF/Marco Dormino

WASHINGTON, Jul 20 2012 (IPS) - U.S. legislators are appealing to the United Nations to take a greater role in addressing Haiti’s cholera outbreak, now in its third year and which has has left thousands dead.

In a letter addressed to U.S. Permanent Representative to the United Nations Susan Rice, 104 U.S. members of Congress urged Rice to help step up U.N. concern over the outbreak.

“It is imperative for the U.N. to now act decisively to control the cholera epidemic,” Representative John Conyers, Jr. wrote. “A failure to act will not only lead to countless more deaths … and will pose a permanent public health threat.”

The cholera outbreak has been linked in analyses to Nepali peacekeepers stationed in Haiti in 2010. A 2011 study by the New England Journal of Medicine concluded that the cholera strand introduced into Haiti — Vibrio cholerae — matched a strain that was found in a South Asian source identified in 2002 and 2008.

The 2010 outbreak was the first time that a case of cholera was reported in Haiti for nearly a century, according to the U.S. Centres for Disease Control and Prevention.

In March, former president Bill Clinton, now a U.N. special envoy to Haiti, stated that a U.N. peacekeeper was the “proximate cause” of the outbreak.

The U.N. offered no formal comment to IPS regarding the outbreak.

The letter from U.S. representatives was welcomed by the Haiti rights group Institute for Justice & Democracy in Haiti (IJDH), based in Boston, Massachusetts. The group is currently suing the U.N. on behalf of 5,000 cholera victms, for up to 100,000 dollars per death, and 50,000 per infected person.

“Congress’ call to action reflects a growing consensus that the U.N. has a moral and legal responsibility to address Haiti’s cholera epidemic, and that it must do so urgently before more lives are lost,” Brian Concannon Jr., director of the IJDH, said in a statement.

The U.N. has never accepted full responsibility for the outbreak, however, finding in a 2011 report that a “confluence of circumstances” caused the outbreak and that the epidemic was “not the fault of, or deliberate action of, a group or individual”.

According to some, the continued denial can be put down to the U.N. trying to save face. “It’s an embarrassment for them,” Daniel Beeton, director of international communications at the Center for Economic and Policy Research, a progressive think tank based here, told IPS. “It’s the opposite of their mission.”

Jon Kim Andrus, deputy director of PAHO, said that in addition to the death tolls, the Haitian government had reported a total of more than 520,000 cases of cholera.

The influx of cholera in Haiti has had adverse effects on the country beyond just health concerns, according to the WHO.

“In addition to human suffering caused by cholera, cholera outbreaks cause panic, disrupt the social and economic structure and can impede development in the affected communities,” the WHO has said.

The WHO cites the experience of Peru, which experienced a cholera outbreak in 1991. It ultimately cost the country 770 million dollars due to “food trade embargoes and adverse effects on tourism”.

Cholera, which induces diarrhea and vomiting in the victim that potentially lead to extreme dehydration, is impacting an economy that already has an unemployment rate of 40 percent, according to the Central Intelligence Agency World Factbook.

In response to the outbreak and humanitarian crises in Haiti, the U.N. requested 864 million dollars for stabalisation efforts, in 2010. The current budget for the U.N. Stabilization Mission in Haiti (MINUSTAH) is 793 million dollars.

According to the U.S. Agency for International Development (USAID), the government has already distributed more than 73 million dollars in aid to Haiti in response to the cholera outbreak.

Cholera has also been spreading across the Caribbean. Cuba now has 170 confirmed cases of the disease, though it has not yet been definitively linked to the outbreak in Haiti. However, the Cuban Health Ministry has said that the last reported outbreak of cholera in the country, before this year, was shortly after the 1959 Cuban Revolution.

Haiti has had additional problems previously with U.N. peacekeepers, notably over claims of sexual assault and excessive violence.

In March, the U.N. discharged three members of the Pakistani Formed Police Unit, who were serving with MINUSTAH, after they were accused of sexually assaulting a 14 year-old boy.

U.N. peacekeeping troops were also accused of pinning down and sexually assaulting an 18-year-old Haitian man in 2011, an event that was reportedly captured on a cell phone video.