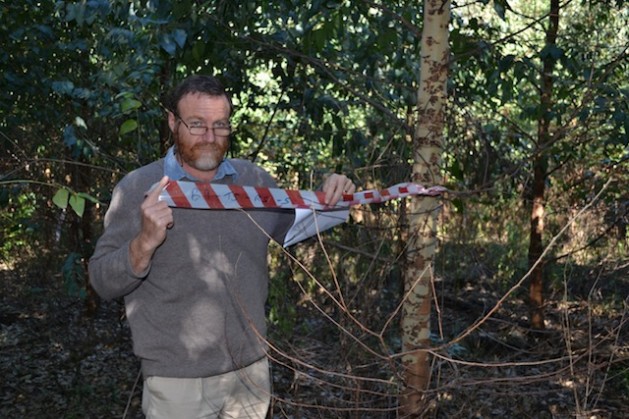 Researcher David Still has found a way to contain the pathogens in human waste in order to use it as a fertiliser. Credit: Yuven Gounden/IPS

PRETORIA, South Africa, Jul 4 2012 (IPS) - As South Africa grapples with reducing its sanitation backlog, scientists seem to have found a way to reduce the build up while simultaneously combatting the country’s food insecurity. The solution? Safely using human waste as fertiliser.

Although almost 11 million South Africans have been served with basic sanitation since 1994, more than 13.3 million people had not yet accessed basic sanitation services by 2008, according to the country’s Council for Scientific and Industrial Research.

But in addition to this, South Africa’s pit latrines are filling up faster than their expected design life, according to the Water Research Commission (WRC).

“Only one third of municipalities have a budget to maintain on-site sanitation. If pits fill up, all the hard work that was done to address the sanitation backlog will be wasted. Why not use faecal sludge (FS) to address the growing problem of food insecurity by planting fruit trees? Or use the sludge to cultivate trees for fuel or paper production?” asked WRC researcher David Still. The result was the formation of the project titled “What happens when pit latrines get full.”

“It is clear that in our country the use of vacuum tankers is not always a solution because of access problems, and also because of the foreign objects found in pit latrines,” he said.

Human excreta or FS have valuable nutrients such as Nitrogen, Phosphates and Potassium and the average person excretes enough of this per year to sufficiently fertilise 300 to 400 square metres of crops.

However, using FS as a fertiliser can be hazardous because of the pathogens it contains, especially if it is used for surface spreading and where edible crops are cultivated. There is also a risk that the FS could contaminate groundwater.

“We looked at the possibility of harnessing the nutrient value of the sludge whilst containing the hazard posed by the pathogens until they died off,” said Still.

In order to find a way to contain the pathogens in the FS, research was conducted on two pilot sites, one in Umlazi and the other in Karkloof, in KwaZulu-Natal, South Africa. The local municipality and the South African Paper and Pulp Industry (SAPPI) respectively own the sites used.

Still and his team discovered that by burying the FS in pits and planting on top of it, pathogens were contained and eventually died off.

Trenches of about 0.75 metres in depth were dug and partly filled with FS of varying volumes. Two control sites where no FS was added were also monitored. The trees in the area were monitored for growth and volume those planted above the FS showed significant growth and volume, “as much as 80 percent”.

In order to test for the presence of FS pathogens, the researchers searched for the eggs of the large roundworm, a hardy parasite. If the eggs were found, it meant that the FS still contained pathogens and was harmful.

“Analysis of sludge extracted at periodic intervals indicated that no roundworms could be found after a period of 30 months after burial in the ground,” Still said.

Sfundo Nkomo, an engineer with Partners in Development, tested for microbes at the Umlazi site.

“One has to monitor the situation because of the risks involved. It is clear that the technology works and that the plants have nice dark green leaves. Of the nine rows of planted trees, those with the sludge treatment were bigger and better developed.”

Groundwater near the entrenchment sites was also monitored to determine whether the sludge affected water quality. At the Umlazi site, which is flat and sandy with deep soils, no impact was observed. However, at the site near Karkloof, which is sloping with shallow soils, a small increase in nitrate concentrations in the groundwater immediately after rainfall was observed.

It showed researchers that sites selected for deep row entrenchment should ideally be flattish and have deep soils.

Lindiwe Khoza’s house in Umlazi was selected as a test site. The sludge was buried in the ground here and citrus and peach trees were planted on top.

“The fruit grows much faster and it seems to be tastier and juicier than fruit bought at supermarkets. We now enjoy fruit from our own garden,” a delighted Khoza told IPS through a translator.

The land management programme leader at Sappi Forests, Giovanni Sale, said that they had also seen a marked increase in tree growth in the areas where deep row entrenchment was used.

“This improvement in tree growth, however, unfortunately does not make up for the very high site preparation. Land preparation costs were in the region of thirty times more than conventional forestry practice. Therefore, the economics alone do not make this a viable commercial practice at present,” Sale said.

He added that if the local municipality were to start a deep row entrenchment project on their own land, and crop it with plantation trees, Sappi would assist.

“Sappi would be in a position to offer superior planting stock, technical assistance and a market for this timber. If the municipality were to adopt this practice and if smaller volumes of sludge are buried at regular intervals using labour, a small work force could be kept busy,” he said.
He did add that it was “a once-off experiment.”

Jay Bhagwan, the director of Water Use and Waste Management at the WRC, said that deep row trenching could provide both food and fuel security for communities.

“Communities can grow fuel wood trees or fruit trees according to their requirements. Plant growth and fruit development are greatly improved with the application of the sludges. The technology has enormous potential. Making sanitation work also raises such exciting possibilities for smart management of our resources,” Bhagwan said.