WASHINGTON, Jul 12 2012 (IPS) - The world’s population now stands at about seven billion, and by 2050, this figure will hit a whopping nine billion. 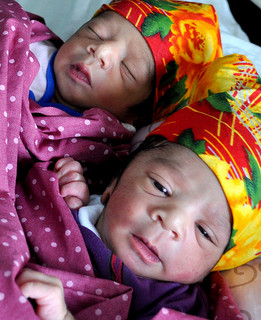 In his new book, “State of the World 2012: Moving Toward Sustainable Prosperity” , Robert Engelman, president of the Worldwatch Institute, outlines nine population strategies that he argues will effectively halt population expansion just short of that figure.

Engelman’s policies call for a massive restructuring of political and social policies, especially towards women. Universal access to contraception, secondary education for all women, eradication of gender bias that limits women’s economic opportunity and growth, as well as higher taxes are some of Engelman’s strategies to nip the baby boom in the bud.

“There is a definite link between growing population, poverty levels, and women’s inequality. If all women could use their right of choice and only have children when they wanted to, the population rate would stabilise. Right now 75 million to 80 million babies are born every year,” said Engelman.

Engelman argues that by cutting off women from education and the public sphere, the world will not only have a burgeoning population on its hands, but one that doesn’t have the resources to feed, clothe and educate the coming generations.

The projected astronomical rise in numbers is unsettling for more than one reason. According to the World Bank, 1.29 billion people live on less than 1.25 dollars a day, one in seven people go hungry every day, and 60 percent of the world’s hungry are women. UNICEF estimates that 22,000 children die each day due to reasons connected to poverty. The statistics are dismal.

Though the World Bank has reported progress since the 1980s, it still may not be enough to counter the surge in population and the resulting problems that will stem from it.

Martin Ravallion, director of the World Bank’s research group, lays it out as is. “The developing world as a whole has made considerable progress in fighting extreme poverty, but the 663 million people who moved above the poverty lines typical of the poorest countries are still poor by the standards of middle- and high-income countries,” he said.

“This bunching up just above the extreme poverty line is indicative of the vulnerability facing a great many poor people in the world. And at the current rate of progress, around one billion people would still live in extreme poverty in 2015,” said Ravallion.

Engelman’s ideas of universal contraception and education may be seen as a tall order, but without them, he argues, change just isn’t possible. The United Nations and the World Bank have been stressing the importance of education, especially family planning and sex education for women, for decades.

However, cultural and religious mores have to be taken into account, he says. Sweeping restructuring will not and cannot be instantly achieved.

More than 75 percent of the world’s poor live on subsistence farming. The more hands one has to till the lands, the better. In countries like India, Pakistan and Bangladesh, having sons in the family is a matter of pride and honour. In certain cases, contraception isn’t widely available in rural areas, making it difficult for women to use family planning methods.

Engelman is quick to point out that women’s inequality isn’t restricted to developing countries – economic and social inequality exists everywhere, including the United States, where women still earn 82.2 percent of what men earn.

According to the U.S Department of Labor, women’s median weekly earnings were 697 dollars compared to 848 dollars for men in the first quarter of 2012.

“Equal rights in the public and private sphere will afford women the right to make their own choices. Access to contraception, and education will surely result in slower population growth, and a reduction in poverty levels,” said Engelman.

“Too often, in too many places, these rights are denied. Millions of women and young people in developing countries don’t have access to information to plan their family. This is not only a violation of their right to decide the number, timing, and spacing of their children, it’s also a question of equity as women everywhere should have the same ability to determine this fundamental part of their lives.

“Voluntary family planning programmes represent more than just an investment in health and human rights. Family planning is one of the most successful development interventions and one of the strongest and most cost-effective investments available. It reduces poverty, and it allows governments to invest in infrastructure, schooling, and healthcare,” read the statement.

The United States has contributed over 640 million dollars through USAID towards bilateral family planning and 35 million dollars to the U.N. Population Fund (UNFPA). With abortion and contraception issues coming to the fore in the upcoming 2012 U.S elections, the future of access to choice is yet to be decided.