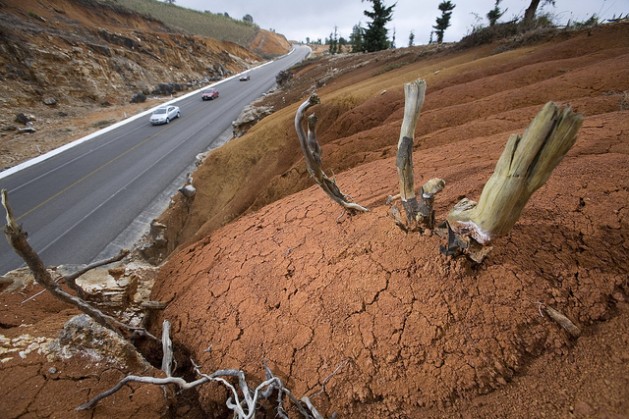 UNITED NATIONS, Aug 16 2012 (IPS) - Food rights activists from around the world will descend on the coastal U.S. state of Florida next week to protest homelessness and hunger facing millions of people in the United States and across the globe.

The Aug. 20-26 protests in Tampa were organised to draw attention to the Republican Party’s aggressive stance on tax cuts for the rich and reductions in the social safety net for poor and working families.

The Republicans hold their national convention in Tampa on Aug. 17 to formally anoint Mitt Romney as the party’s candidate for the presidential election in November.

“I have seen people who did not eat for five days. This is happening in the world’s wealthiest country,” Keith McHenry, co-founder of Food Not Bombs and an organiser of next week’s protests, told IPS.

More than 46 million U.S. citizens currently rely on the federally-funded food stamp programme to help meet their nutritional needs – more than one in seven people. The average benefits amount to about 143 dollars a month, even as food prices continue to rise.

“What’s going on with the poor here and abroad is economic manipulation,” said McHenry. “Access to food is a right, not a privilege, but our leaders don’t recognise that. That is why there are so many people in jails because they are poor.”

The United States leads the world in incarceration rates, with more than two million people living behind bars.

The Barack Obama administration intends to cut food stamps funding by about two percent, or 1.6 billion dollars, a year. Besides attacks on health-care, the Republicans are seeking much greater cuts to the programme, whose funding in 2011 was 78 million dollars.

Beyond the U.S., millions across the world are mired in chronic conditions of hunger and starvation. According to the UN, nearly one billion people suffer from food insecurity, a vast majority of them rural poor.

Food price hikes, rising unemployment and variety of other factors are all contributing to the worsening scenario, according to the Rome-based Food and Agriculture Organisation (FAO).

Last week, the FAO said that food prices had gone up in July up by six percent compared to the previous month. Grains and sugar were the main drivers of the increase.

Commenting on the FAO report, Colin Roche of Oxfam International told IPS, “This is not some monthly wake-up call. It’s the same global alarm that has been screaming at us since 2008.

“These new figures prove that the world’s food system cannot cope on crumbling foundations,” he said, adding that urgent actions must be taken by government, particularly the most advanced economies in the G20.

While attention is focused on a severe drought in the United States cornbelt, Roche believes that the problem has much deeper roots. Climate change, for example, is impacting harvests around the world.

Since the global economic recession began in 2008, many independent development experts and economists have held that the problem of hunger is not going to go away unless policymakers take the issue of economic inequality seriously.

“Hunger is caused by poverty and inequality, not scarcity (of food),” argues Eric Holt-Gimenez, executive director of the U.S.-based Institute for Food and Development Policy and the main author of a new book titled “Food Rebellion: Crisis and the Hunger for Justice.”

Gimenez describes the failure of the U.S. corn harvests as a disaster for the world’s poor. “(This is) not because the poor eat our corn. They don’t eat corn-fed livestock from concentrated animal feeding operations (CAFOs) either, nor do they fill up at the pump with ethanol-blended gasoline.”

But they will nonetheless “suffer the third global food disaster in four years because the price of corn will push up the price of other food commodities, like wheat, soybeans and rice. This will push up food prices overall.

“If the 2008 and 2011 food price crises are any guide,” he says, “the global effects of the U.S. drought are fairly predictable.” He thinks that the bump in commodity prices will send a market signal for speculative investment, pushing the price of grain up even further.

“The countries with good harvests – or reserves – will use them to avoid buying grain on the global market and will institute export bans,” he said.

But those countries with fragile regimes, in his analysis, will be challenged to keep food prices below the “riot” thresholds. “(They) will direct food primarily to the cities, and the highest prices will be in the countryside, where the rural poor will not be able to afford to buy food.”

In 2008, soaring food prices unleashed a wave of violent unrest in some 40 countries.

On efforts to tackle food insecurity, Oxfam’s Roche described the FAO report as the “ECG of a very sick patient” and suggested that the U.S. and the European Union must start dumping their “crazy” subsidy programmes that turn 40 percent of corn into fuel for cars and tracks.

“The G20 has the tools to tackle causes of spiking, volatile food prices and food insecurity today and into the future,” said Roche, adding that “they must reverse decades of under-investment into small-holder agriculture.”

Will the leaders of rich countries heed such advice?

“Neither will they do anything to address the root causes of hunger: the global concentration of market power, political decision, land, water, seeds, resources and our rapidly eroding agro-biodiversity in the hands of a few dozen agri-foods monopolies with absolutely no accountability to anyone except stockholders,” he said.

Agriculture, in his analysis, will not be removed from the World Trade Organisation, and the World Bank and International Monetary Fund will not allow poor countries to protect their agricultural sectors from the volatility of the world market.

“Chicago and Wall Street are not going to be restricted from speculating by any reinstatement of financial regulations. Grain monopolies will not be prevented from hoarding,” he predicted. “None of the immediate causes of hunger will be addressed.”

For his part, Food Not Bombs’ McHenry said his organisation planned to hold a series of protests around the world and that activists would also stage a sit-in at the Democratic Party convention to be held in Charlotte, North Carolina, early next month.