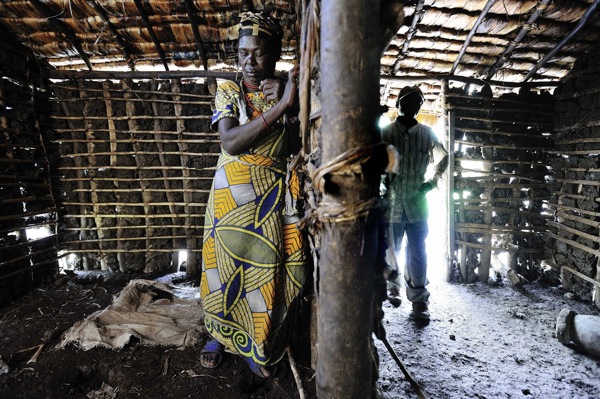 In 2007, Angeline Mwarusena, who lives in the Democratic Republic of Congo, was repeatedly raped by soldiers from Democratic Forces for the Liberation of Rwanda (FDLR). Credit: Einberger/argum/EED/IPS

UNITED NATIONS, Sep 26 2012 (IPS) - At a high-level event at the United Nations in New York on Tuesday, U.N. Women, the United Nations body for female empowerment and gender equality, called for stronger action from world leaders to prevent and punish sexual violence in conflict.

“The fact remains that women’s bodies remain a battleground, and impunity remains the norm rather than the exception,” said Michelle Bachelet, a former president of Chile and the current executive director of U.N. Women. “The experience of women during and after conflict continues to be one of violence and insecurity.”

Bachelet suggested three strategies that could help begin to tackle the problem.

The first, expanding women’s participation in post-conflict recovery, “provides an opportunity for women to ensure that peace agreements, new laws and new constitutions do not reinforce the pre-existing status quo and that they advance equality and justice”, Bachelet said.

Underscoring her point is the fact that according to U.N. Women, in recent peace negotiations, women have represented less than eight percent of participants. Less than three percent of signatories to peace agreements have been women, and no woman has ever been appointed chief or lead mediator in U.N.-sponsored peace talks.

Bachelet also said that women’s organisations must be supported by the world’s governments in order to take on and address gender inequalities that “make women more vulnerable to sexual and gender-based crimes during and after conflicts”.

As part of an effort to tackle the issue of and reduce gender-based crimes in times of conflict, U.N. Women and the U.N. Department of Peacekeeping Operations together have initiated “the first ever scenario-based training for military peacekeepers” to prevent sexual violence, Bachelet announced at the meeting.

“We are currently testing this training in major troop contributing countries,” Bachelet said. “Earlier this month, a first training took place in The Hague on investigating cases of sexual and gender-based violence as international crimes.”

Zainab Bangura, recently appointed Special Representative of the Secretary-General on sexual violence in conflict, added at the meeting that “for too long, conflict-related sexual violence has been largely cost-free for those who rape women, children and men, whereas the costs have been borne by the victims”.

“Even as we ensure that survivors receive the care and services they require, we must insist that sexual violence in conflict is not inevitable, but that the consequences for the perpetrators are,” Bangura stated.

UK Foreign Secretary William Hague elaborated on what victims endure in bearing the costs of the crime, emphasising that the silence surrounding sexual assault often is even harder to break when it comes to crimes committed against men and children.

“We must break the silence if we are to achieve sustainable peace and prosperity,” Hague said. “The UK stands ready to put its full weight this agenda, as a catalyst for others to take action.”

Renowned American peace activist and feminist Jody Williams, who was awarded the Nobel Peace Prize in 1997 for her work on banning antipersonnel landmines, agreed with Hague.

“Survivors of sexual violence are brutalised twice – first by the perpetrators of the crimes against them, and the second time by governments that fail to apply the rule of law and ensure justice for survivors,” Williams concluded.

The side event to the 67th U.N. General Assembly was arranged by U.N. Women in cooperation with the UK Foreign Secretary, the Office of the Special-Representative of the Secretary-General on sexual violence in conflict, and the International Campaign to Stop Rape and Gender Violence in Conflict.