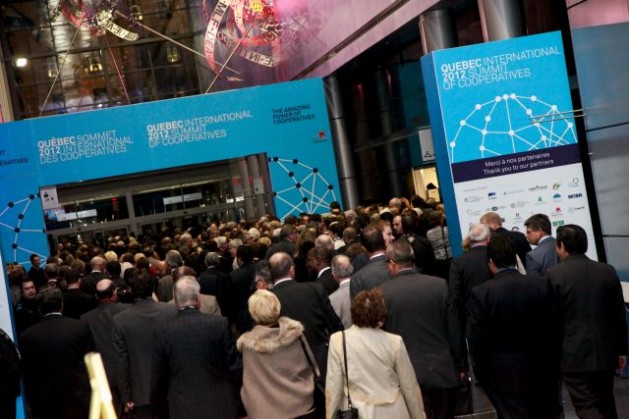 The International Summit brought together close to 2,800 delegates from 91 countries to celebrate the power of cooperatives. Photo Courtesy of Desjardins

QUEBEC CITY, Canada, Oct 12 2012 (IPS) - The migratory seeds of cooperatives were sown and first thrived in Europe, but have since adapted to the climate of nations worldwide.

Faces from as far as Kenya and the Philippines and as close as the Canadian Arctic and Cuba flocked to Quebec for the opportunity to claim ownership of today’s fledging and diverse movement.

The hope is that this international year will turn into an international decade honouring cooperatives, Dame Pauline Green, the president of the International Cooperative Alliance (ICA), told IPS.

Summit participants gathered to publicise the efforts of the movement and to gain insight into the business challenges for cooperatives ahead.

“The summit was a great opportunity to exchange ideas and innovative practices,” said Monique Leroux, the CEO of Desjardins and the co-host, in a statement.

Going forward, a declaration was adopted by the co-hosts of the conference, Desjardins, ICA and St. Mary’s University to make a stronger case for cooperatives to the public and authorities of governance.

As for their goals in improving the cooperative enterprise, they pledged to harness new tools for communicating their goals to the public and to develop new ways of enhancing communication and consultation with members and management.

For Quebec, the summit was also a chance to pay tribute to Alphonse Desjardins, who initiated the first step to making credit unions an option for French Canadians who would otherwise have been forced to leave the province in pursuit of income opportunities.

The stories that emerged from the global gathering underscored the role that cooperatives have played in making it possible for people to remain rooted in their communities, keeping much needed talent from fleeing.

Mary Nirlungayuk, the corporate services vice president of the Arctic Cooperatives Limited, shared with IPS the story of how cooperatives in the north have created a channel of income for artist collectives and have popped up where others have not always tread – providing cable and construction services to partnering with airline and shipping companies to reduce the cost of transporting the annual inventory of goods.

The grassroots orientation of cooperatives made it viable model of enterprise for First Nations communities, striving to reconcile past traditions with present realities.

“They were created because it was very similar to the Aboriginal, First Nations concept that they would help each other,” Nirlungayuk told IPS. “And if it can work in these remote communities, why can’t it be more successful in other places.”

In Cuba, where the groundwork for a cooperative future is being laid, its delegation of 10 was there to learn from others as well as to demonstrate the weight of the movement within the country.

“We wanted to let the rest of the world see what is going on,” said Wendy Holm, who heads the delegation. “Socialist and capitalist co-ops are slightly different in form… One of the challenges is going to be to give them as much autonomy, while at the same time recognising that you’re (for instance) a farm co-op tasked to produce food for the wider population.”

The versatile construct of cooperatives has made it a blueprint for enterprises in the agriculture, insurance, housing, and retail sectors and among others. In the socialist economy of Cuba, Holm said cooperatives make the most sense in the shift to convert trouble-ridden enterprises away from state management.

The Cuban delegation was “interested in looking at as many cooperative endeavours as they can,” and had even met with a taxi co-op to learn how it could be adapted in Havana, Holm told IPS.

Though smaller than the Cuban delegation, the Philippines, with its modest contingent of four, also sought to make an imprint at the summit.

Youth delegate and speaker, Marie Antoinette Roxas, from the Philippines, was there to share her university, Iligan Institute of Technology’s cooperative initiatives. She told IPS that other youth head programmes that introduce financial literacy to children in elementary schools, as an effort to instill smart financial practices at a young age.

The student-run cooperative is also involved in designing income-generating activities; one project that has taken off has been its partnership with local tailors to make eco-friendly bags that are then sold with interest to its mother co-op, the university’s Multi-Purpose Cooperative.

While there were many opportunities to hear about different initiatives, Simel Esim, the chief of the ILO’s cooperative branch told IPS she wished there had been more opportunity to connect with the people behind them – and had hoped for more dialogue between delegates.

Amidst the challenges of staying relevant and competitive, the biggest one ahead, said Esim, is going to be connecting with and preaching to people beyond the converted.

At the summit closing, Leroux announced Desjardins’ hopes of setting up another international gathering. Perhaps that will be on the agenda at the next summit in 2014.