How the U.S. Quietly Lost the IED War in Afghanistan 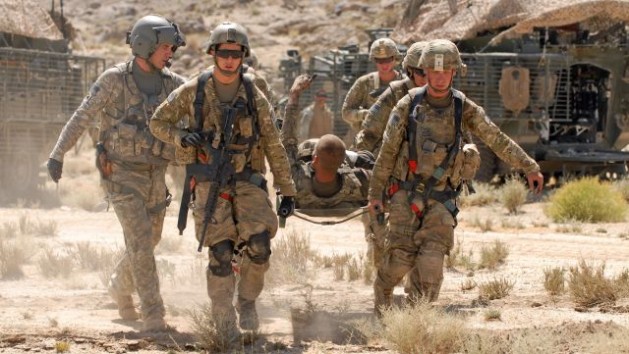 U.S. Army Pfc. Shawn Williams is evacuated after being injured by a roadside bomb in Kandahar Province on Jun. 17, 2011. Credit: DoD photo

WASHINGTON, Oct 9 2012 (IPS) - Although the surge of “insider attacks” on U.S.-NATO forces has dominated coverage of the war in Afghanistan in 2012, an even more important story has been quietly unfolding: the U.S. loss of the pivotal war of improvised explosive devices (IEDs) to the Taliban.

Some news outlets have published stories this year suggesting that the U.S. military was making “progress” against the Taliban IED war, but those stories failed to provide the broader context for seasonal trends or had a narrow focus on U.S. fatalities. The bigger reality is that the U.S. troop surge could not reverse the very steep increase in IED attacks and attendant casualties that the Taliban began in 2009 and which continued through 2011.

Over the 2009-11 period, the U.S. military suffered a total of 14,627 casualties, according to the Pentagon’s Defense Casualty Analysis System and iCasualties, a non-governmental organisation tracking Iraq and Afghanistan war casualties from published sources.

Of that total, 8,680, or 59 percent, were from IED explosions, based on data provided by the Pentagon’s Joint IED Defeat Organisation (JIEDDO). And the proportion of all U.S. casualties caused by IEDs continued to increase from 56 percent in 2009 to 63 percent in 2011.

The Taliban IED war was the central element of its counter-strategy against the U.S. escalation of the war. It absorbed an enormous amount of the time and energy of U.S. troops, and demonstrated that the counterinsurgency campaign was not effective in reducing the size or power of the insurgency. It also provided constant evidence to the Afghan population that Taliban had a continued presence even where U.S. troops had occupied former Taliban districts.

U.S. Pentagon and military leaders sought to gain control over the Taliban’s IED campaign with two contradictory approaches, both of which failed because they did not reflect the social and political realities in Afghanistan.

JIEDDO spent more than 18 billion dollars on high-tech solutions aimed at detecting IEDs before they went off, including robots, and blimps with spy cameras. But as the technology helped the U.S.-NATO command discover more IEDs, the Taliban simply produced and planted even larger numbers of bombs to continue to increase the pressure of the IED war.

The counterinsurgency strategy devised by Gen. David Petraeus and implemented by Gen. Stanley A. McChrystal, on the other hand, held that the IED networks could be destroyed once the people turned away from the Taliban. They pushed thousands of U.S. troops out of their armoured vehicles into patrols on foot in order to establish relationships with the local population.

The main effect of the strategy, however, was a major jump in the number of “catastrophic” injuries to U.S. troops from IEDs.

In his Aug. 30, 2009 “initial assessment”, McChrystal said the International Security Assistance Force (ISAF) “cannot succeed if it is unwilling to share risk at least equally with the people.”

In an interview with USA Today in July 2009, he argued that “the best way to defeat IEDs will be to defeat the Taliban’s hold on the people.” Once the people’s trust had been gained, he suggested, they would inform ISAF of the location of IEDs.

McChrystal argued that the Taliban were using “the psychological effects of IEDs and the coalition force’s preoccupation with force protection” to get the U.S.-NATO command to reinforce a “garrison posture and mentality”.

McChrystal ordered much more emphasis on more dismounted patrols by U.S. forces in fall 2009. The Taliban responded by increasing the number of IEDs targeting dismounted patrols from 71 in September 2009 to 228 by January 2010, according data compiled by JIEDDO.

That meant that the population had more knowledge of the location of IEDs, which should have resulted in a major increase in IEDs turned in by the population, according to the Petraeus counterinsurgency theory.

But the data on IEDs shows that the opposite happened. In the first eight months of 2009, the average rate of turn-ins had been three percent, but from September 2009 to June 2010, the rate averaged 2.7 percent.

After Petraeus replaced McChrystal as ISAF commander in June 2010, he issued a directive calling for more dismounted patrols, especially in Helmand and Kandahar, where U.S. troops were trying to hold territory that the Taliban had controlled in previous years.

In the next five months, the turn-in rate fell to less than one percent.

Meanwhile, the number of IED attacks on foot patrols causing casualties increased from 21 in October 2009 to an average of 40 in the March-December 2010 period, according to JIEDDO records. U.S. troops wounded by IEDs spiked to an average of 316 per month during that period, 2.5 times more than the average for the previous 10-month period.

The damage from IEDs was far more serious, however, than even those figures suggest, because the injuries to dismounted patrols included far more “traumatic amputation” of limbs – arms and legs blown off by bombs – and other more severe wounds than had been seen in attacks on armoured vehicles.

A June 2011 Army task force report described a new type of battle injury – “Dismount Complex Blast Injury”– defined as a combination of “traumatic amputation of at least one leg, a minimum of severe injury to another extremity, and pelvic, abdominal, or urogenital wounding.”

The report confirmed that the number of triple limb amputations in 2010 alone had been twice the total in the previous eight years of war.

A study of 194 amputations in 2010 and the first three months of 2011 showed that most were suffered by Marine Corps troops, who were concentrated in Helmand province, and that 88 percent were the result of IED attacks on dismounted patrols, according to the report. In January 2011, the director of JIEDDO, Gen. John L. Oates, acknowledged that U.S. troops in Helmand and Kandahar had seen “an alarming increase in the number of troops losing one or two legs to IEDs.”

Statistics on the total number of limb amputations and traumatic brain injuries in Afghanistan were excised from the task force report.

The total for wounded in the first eight months of 2012 are 10 percent less than the same period in 2011, whereas the number of dead is 29 percent below the previous year’s pace.

The reduction in wounded appears to reflect in part the transfer of thousands of U.S. troops from Kandahar and Helmand provinces, where a large proportion of the casualties have occurred, to eastern Afghanistan. The number of IED attacks on dismounted patrols in the mid-July 2011 to mid-July 2012 period was 25 percent less than the number in the same period a year earlier, according to JIEDDO.

The Pentagon was well aware by early 2011 that it wasn’t going to be able to accomplish what it had planned before and during the troop surge. In a telling comment to the Washington Post in January 2011, JIEDDO head Gen. Oates insisted that the idea that “we’re losing the IED fight in Afghanistan” was “not accurate”, because, “The whole idea isn’t to destroy the network. That’s maybe impossible.”

The aim, he explained, was now to “disrupt them” – a move of the goalposts that avoided having to admit defeat in the IED war.

And in an implicit admission that Petraeus’s push for even more dismounted patrols is no longer treated with reverence in the ISAF command, the August 2010 directive has been taken down from its
website.