When the carbon dioxide absorbed by the oceans dissolves in seawater, carbonic acid is formed and calcium carbonate, vital for the formation of the skeletons and shells of many marine organisms, becomes scarcer. 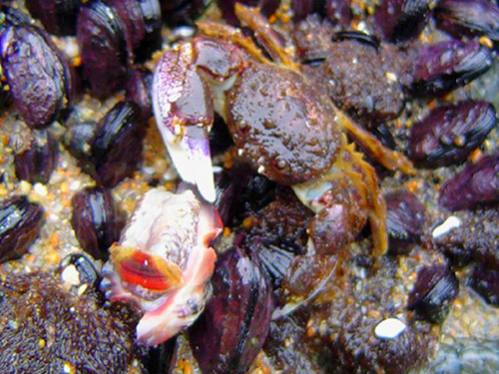 MONTEREY, California, Oct 2 2012 (IPS) - Climate change will ruin Chilean sea snails’ ability to sniff out and avoid their archenemy, a predatory crab, according to Chilean scientists who presented their findings at an international science symposium here.

Researchers from Australia also revealed that as the oceans become more and more acidic, some fish become hyperactive and confused, and move towards their predators instead of trying to escape.

“The conditions in oceans are changing 100 times faster than at any time in the past,” said Jean-Pierre Gattuso, a marine biologist with CNRS-INSU and the Laboratoire d’Océanographie de Villefranche in France.

Climate change is making oceans warmer and more acidic. “We are beginning to understand what will happen. I think we can expect the worst,” Gattuso told Tierramérica*.

Gattuso is one of nearly 600 scientists from around the world who presented their research on Sep. 24-27 at the Third International Symposium on the Ocean in a High-CO2 World: Ocean Acidification in Monterey, California.

Researchers discovered only 10 years ago that burning fossil fuels like coal, oil and gas has made the oceans about 30 percent more acidic since the beginning of the Industrial Revolution.

One third of the carbon dioxide (CO2) emitted from using fossil fuels has been absorbed by the oceans. When CO2 dissolves in seawater, carbonic acid is formed. This phenomenon, known as ocean acidification, reduces the availability of calcium carbonate, which interferes with the formation of the skeletons and shells of many marine organisms.

The combination of greater acidity and a lower concentration of calcium carbonate in the water also has consequences for the physiological functions of numerous living beings.

This is basic, undisputed ocean chemistry. And acidification will increase as more CO2 is emitted, said the scientists meeting in Monterey.

Pteropods, a very small free-swimming mollusk species, are becoming “naked” because they are losing their protective shell as acid levels increase. Pteropods are food for many species and a key element in the Southern Ocean and other oceans, he said.

More surprising are the sub-lethal effects, such as the recently documented changes in behavior.

In a sophisticated experiment, Chilean scientists exposed Chilean sea snails (Concholepas concholepas) to ocean acid levels expected before the end of the century.

“It is called the ‘Chilean abalone’ in English and is a very important food with high social and economic importance in Chile,” said researcher Patricio Manríquez of the Institute of Marine Sciences and Limnology at Austral University in Valdivia, Chile.

Its main predator is the Chilean intertidal carnivorous crab (Acanthocyclus hassleri). The snails can smell the crabs and move away to escape being eaten.

Manríquez and colleagues built special tanks where they could regulate the acidity of the seawater. They collected snail larvae from north, central and southern Chile and then reared them in labs for five to six months under various high-acid conditions, Manríquez told Tierramérica.

The researchers then put crabs in the tanks with the snails to study their predator-prey interactions under various levels of acidification.

At acidity levels expected when the amount of CO2 in the atmosphere rises from the current 390 parts per million (ppm) to 750 ppm, the snails immediately try to get as far away from the crabs as they can.

At higher levels of 1,000 to 1,200 ppm CO2, the snails seem confused and wander about aimlessly, often going right towards the crabs.

Those higher levels of CO2 could be reached by the end of the century unless major emission reductions are made.

“There was no change in the growth rates or size of the snails,” he said. However, at least 10 additional studies are underway regarding the impact on the snails’ shells, on snail larvae and other aspects.

There are 10 scientists and 35 students from different disciplines now investigating the impacts of ocean acidification in Chile. However, it still remains a challenge to have their findings published in scientific journals, said Manríquez.

“Our methods and expertise are often questioned,” he said, referring to the peer-review processes carried out before research studies are published. Manríquez maintains that this treatment for Chilean academic studies goes far beyond acceptable levels, and that he had not experienced it when presenting work in collaboration with a British research institute. .

Meanwhile, on the other side of the Pacific, Australian researchers have learned that ocean acidity affects behavior in some tropical reef fish.

Ocean acidity acts to acidify the internal tissues of fish and other water breathers, and while they can deal with this, researchers have learned that there are sub-lethal effects, said Philip Munday, a researcher at the School of Marine and Tropical Biology at James Cook University.

“Their activity level, behavior and boldness increase. They become more active and adopt more risky behavior,” he said. As a result, they are twice as likely to be eaten by predators under higher acid conditions.

Predators are affected as well. They are not as efficient at catching their prey under these conditions, for example. “Predators also switched to different prey, which was something we did not expect,” he said. “It will be hard to predict all of the impacts from higher ocean acidity.”

Researchers here say that overfishing, including bottom trawling, is the biggest immediate threat to the oceans.

Ocean acidification and increasing ocean temperatures are the big concerns in the years to come. But those problems are more difficult and will take longer to deal with, says Gattuso.

There is enough scientific evidence to advise policymakers that action is needed now to reduce CO2 emissions to protect the oceans for the future, he said.