Rural Women in Peru Cope “Where Life Is Very Sad”

LIMA, Oct 12 2012 (IPS) - When the crops in her rural highlands community in southern Peru were covered with a thick layer of ice one night, Felícitas Quispe, 43, organised her neighbours to make an effort to keep people from starving to death.

It’s been two years since the 2010 freeze left her and dozens of families without corn, potatoes or beans to cover their needs, and without pasture to graze their animals in the rural town of Chare, more than 3,500 metres above sea level in the Andean department of Cuzco.

“There was no food, so the women went with the leaders of the community to the civil defence institute and the agriculture ministry. We got new seeds that are still producing our food today, and we continue to burn manure to produce smoke to protect the crops from freezing,” she told IPS.

Quispe is the president of the Qamayoc Association that provides technical assistance in animal health, the use of medicinal plants, and decent housing for women in local highlands communities, where “life is very sad” because of the poverty, and where even water is scarce, she said. 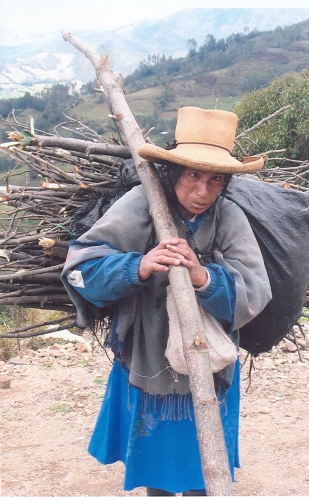 “We don’t want handouts from the government – that breeds idleness. We want gender equity, training for women, education and healthcare; we don’t want our children to die because they can’t get medical attention, since it takes a day to walk down from the mountains to reach a health clinic,” she said.

Although Peru has managed to reduce under-five child mortality by 76 percent, severe inequality and high levels of rural poverty pose serious risks to children in areas vulnerable to climate swings and weather disasters.

According to the United Nations children’s fund, UNICEF, children represent 65 percent of those affected by climate disasters, which in the last 10 years have affected 64 million people in Latin America and the Caribbean.

The largely indigenous population of Peru’s southern Andean region is in danger. The region of Puno, over 4,000 metres above sea level, is experiencing freezes that have ruined crops and killed babies. In March, health authorities reported 31 deaths of children from pneumonia.

Ricardina Bedoya, a 64-year-old peasant farmer who lives in the Puno community of Arboleda, is among those who have been facing difficulties.

She lost her crops in the 2011-2012 harvest season when lake Umayo overflowed its banks due to intense rainfall. The grass that her livestock grazed rotted at the roots, and her potato, quinoa, barley and oca – a tuber grown like potatoes – crops were destroyed.

Her land was under water, she had no crops to take to the market, and she was forced to sell off her animals at a low price.

“We had nothing to cook, the kids got sick with whooping cough and bronchopneumonia, and many died before making it to the health post,” she told IPS. “It’s really hard, but we want our daughters to learn to cope with the problems nature throws at us, and to continue on with their lives, their growing of food, their education.”

Although her community had taken prevention measures, these fell short given the magnitude of the flooding. Now they are preparing to apply for government support, to build sheds for the animals and plant crops in new areas.

The efforts of Felícitas Quispe in Cuzco and Ricardina Bedoya in Puno are an illustration of the initiatives led by women who are taking an active role in the face of complex situations that experts attribute to climate change.

Although women are hit hardest by the effects of floods, freezes or drought, they are the ones who assume the responsibilities of feeding and taking care of their families and communities, said Castorina Villegas López, coordinator in Peru for Groots International (Grassroots Organisations Operating Together in Sisterhood), a U.S.-based grassroots women’s leadership development and networking project.

Saturday Oct. 13, International Day for Natural Disaster Reduction, is dedicated by the United Nations to “Women and Girls – the [in]Visible Force of Resilience”, to highlight the role that women and girls play in risk reduction.

Women and girls “organise themselves on the basis of their capacities and skills, and respond, for example, by contributing to food security. And they do this despite the gender inequality that is ignored by society, by the government and by men,” Villegas López told IPS.

In observance of the International Day of Rural Women, Monday Oct. 15, organised groups of Peruvian peasant women will present an agenda of proposals on five climate change-related areas.

IPS had access to the document, signed by women farmers from southern departments (Arequipa, Apurímac, Cuzco and Puno) and northern departments (Cajamarca, La Libertad, Lambayeque and Piura), which calls on local, regional and national authorities to take into account the gender differentiated impacts of global warming, and to apply public policies to put an end to the neglect that rural women suffer.

The five areas covered by the proposals are food security, natural resources, agricultural production and trade, women’s work in the field and the home, and living conditions.

The rural women are asking for a strengthening of irrigation infrastructure, the construction of family and community water storage reservoirs, reforestation with native species, upgrading of housing, access to agro-ecological techniques and inputs, and participation in decision-making spaces, among other things.

Rural girls and women have the highest illiteracy rate in the country: 14.4 percent, compared to 7 percent for the overall population, according to the National Households Survey of 2010. And 75 percent of illiterate people in Peru are women, according to the Defensoría del Pueblo (ombudsman’s office).

Meanwhile, only 63.7 percent of births in rural areas are attended by skilled health personnel, and 19 percent of adolescent girls have been pregnant, according to the ministry of women and vulnerable populations.

“Women have aptitudes that must be strengthened,” and they have “concrete proposals that are contained in their agenda, which the authorities must take into consideration,” said Blanca Fernández of the Centro Flora Tristán women’s centre.

Among the eight objectives of the National Plan on Equality and Gender 2012-2017, approved by the government in July, is recognition of the contribution of rural women to the sustainable management of natural resources.

To that end, the plan proposes that the proportion of women who receive training and technology transfer be increased by 30 percent over the next five years, and that a disaster response and risk prevention plan with a gender focus be designed.

Fernández believes these targets are important, but says that meeting them depends on political will. “Budget funds are needed to make rural women a priority,” she said. “Otherwise, we will not be able to make progress towards the diverse, intercultural Peru that we want.”