NEW YORK, Oct 10 2012 (IPS) - “Being in isolation to me felt like I was on an island all alone, dying a slow death from the inside out,” said “Kyle B.” from California, who was placed in solitary confinement before he turned 18. 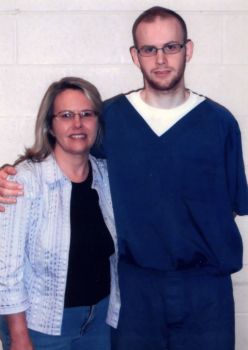 Lois DeMott visits her son Kevin, age 20, at the Woodland Correctional Facility two weeks after his release from a prolonged stay in solitary confinement in 2012. Credit: Human Rights Watch

Thousands of young detainees are being held in solitary confinement in jails and prisons across the United States, for weeks, months or even years with virtually no human contact or meaningful motivation, according to a joint report by Human Rights Watch (HRW) and the American Civil Liberties Union (ACLU) released Wednesday.

The report, entitled “Growing Up Locked Down”, investigates jails and prisons in states such as Colorado, Florida, Michigan, New York and Pennsylvania, among others, and is based on interviews and correspondence with more than 127 young people subjected to solitary confinement, as well as prison officials.

“Locking kids in solitary confinement with little or no contact with other people is cruel, harmful and unnecessary,” said Ian Kysel, Aryeh Neier Fellow with HRW and the ACLU and author of the report.

“Normal human interaction is essential to the healthy development and rehabilitation of young people,” he added.

The HRW and the ACLU estimate that, as of 2011, roughly 95,000 adolescents were kept in prisons and jails, comprising a large number of young inmates nationwide who find themselves in conditions of solitary confinement on a daily basis.

Out of 127 investigated young detainees, 49 have reported spending between one and six months in isolation while under age 18, while 29 said that they spent longer than six months in solitary confinement.

“Many facilities use it to protect young people from adults. Because there are fewer girls than boys in the adult criminal justice system, officials may be more likely to have only one girl in their jail, for example, and hold them in solitary because they feel they have no other option. But there is never a justification for holding a young person in their cell for 22 or 24 hours at a time,” Kysel added.

Numerous psychiatric studies show that long-term solitary confinement causes serious and devastating consequences, which range from mental diseases to physical health problems, undermining the process of rehabilitation for adolescents and even increasing the risk of suicide, the report warns.

Several imprisoned adolescents interviewed for the report said they had considered suicide while in solitary confinement.

They also repeatedly reported how isolation compounds the harm of being in jail or prison per se, describing cutting themselves with staples or razors, having hallucinations, and losing control or losing touch with reality while held in solitary confinement.

Moreover, young people are consistently denied visits by their parents as well as access to treatment, basic services and educational programming to cope with their psychological, medical and social needs. As people under age 18 are still developing, traumatic experiences such as solitary confinement may harm their development and rehabilitative potential.

A video produced by Human Rights Watch contains first-hand testimonies from young detainees as well as their families.

Prison isolation reflects the definition of torture as articulated in different international human rights conventions, such as the United Nations Convention Against Torture that defines it as any act “by which severe pain or suffering, whether physical or mental, is intentionally inflicted on a person” to obtain information, punish for an act, intimidate or coerce, or for any reason based on discrimination.

The 141-page report offers many alternatives and recommendations to address the issue, ranging from disciplinary to administrative, protective or medical ways of treatment, while taking into consideration the rights and special needs of adolescents.

According to the report authors, young people can be better managed in “specialised facilities, designed to house them, staffed with specially trained personnel and organised to encourage positive behaviors”.

Using any short-term isolation should be a rare exception. Moreover, placing young people in correctional facilities designed to house adults should be strictly prohibited.

“In the past decade, the United States Supreme Court has repeatedly acknowledged that in the criminal justice context, youth are entitled to greater constitutional protections than adults,” the report states.

But “there is not currently a case pending before the Supreme Court on solitary confinement of juveniles,” Kysel told IPS, adding that, however, in a string of cases in recent years the court has said that for the purposes of crime and punishment, children are different and their youth must be taken into account.

“In July, the U.S. Senate Judiciary Committee held the first-ever hearing on solitary confinement. This is a national problem and could effectively be addressed by a federal ban,” he said.