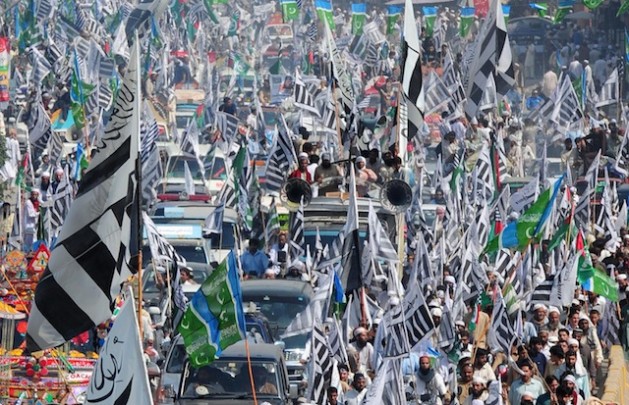 A demonstration in Peshawar. Madrassa students have been prominent in demonstrations in Pakistan that have turned violent. Credit: Ashfaq Yusufzai/IPS.

PESHAWAR, Pakistan, Oct 22 2012 (IPS) - The increasing numbers of religious schools is being cited as the main reason behind violent protests in the northern Khyber Pakhtunkhwa province of Pakistan bordering Afghanistan.

“We have arrested 105 persons in connection with the riots (over the U.S. film on Prophet Muhammad), and 90 of them belonged to religio-political parties while 65 of them and had been students of religious schools (madrassas),” police officer Abdul Naveed told IPS.

“We have begun independent investigation into riots to expose the real culprits for instigating people and damaging public and private properties in the name of Prophet Muhammad,” he said.

“Protest demonstrations often turn violent because the students of religious schools are in the habit of resorting to violence,” he said.

The madrassa students are reported also to have been involved in looting. “Young bearded men mostly drawn from madrassas went berserk. Furniture, glasses and crockery were broken or taken away,” Raees Jan, a hotel manager in Peshawar, who suffered damage worth 4,000 dollars in the protest told IPS.

“Nine-Eleven has left a deep impact on the political landscape, and religious groups thrive on the sentiments of Muslims who cannot tolerate blasphemy,” said Muhammad Dauran Shah at the University of Peshawar.

Khyber Pakhtunkhwa information minister Mian Iftikhar Hussain said protesters were so worked up that the police would not act against them.

The government has launched a programme to modernise religious schools so that students get basic education in such subjects as math and English, and get training in use of computers.

Sardar Hussain Babak, education minister for Khyber Pakhtunkhwa, told IPS that under a proposed plan to modernise education that was hammered out early this year, students would as usual be taught the Nazirah-e-Quran (recitation), Tahfeez-ul-Quran (memorisation), Tajweed (correct pronunciation), Darse-e-Nizami (the standard syllabus of a religious seminary), Tafseer (Quran analysis and interpretation), Hadith (sayings of the Prophet Muhammad), and Fiqah (Islamic jurisprudence).

But other subjects would include Arabic literature, Urdu, English, science, math, computers and information technology, and vocational training.

Babak said, however, that leaders of religious schools see the programme as interference, and have turned down government support.

“Most of these teachers are unable to teach properly. They don’t have modern education. The government wants to support them financially and technically but they don’t want that,” he told IPS.

Babak said the decision to modernise teaching was made amid reports that some of these schools were a breeding ground for militants.

“About 99 percent of the students belong to poor families who cannot afford the cost of modern or government-run schools and opt for religious schools where no fee is charged,” said Babak, a staunch opponent of Taliban militants.

Muhammad Asif, a teacher at the madrassa Uma Hatul Momineen said about 96 percent of students at religious schools are illiterate. “They don’t go to formal schools but take admission directly in seminaries.”

“Religious schools are very good because they teach you the true meaning of Islam,” said 25-year-old Asif, who first went to a government high school and then joined a religious seminary where he obtained a degree in Islamic jurisprudence. “But religious schools must also teach modern education, such as computer, mathematics, English etc.”

According to a report prepared by the schools and literacy department in Khyber Pakhtunkhwa, only about 25 percent of religious schools have sought registration. The report says also that the majority of about 4,000 male and 900 female teachers in Khyber Pakhtunkhwa never went to formal schools themselves, and are graduates from religious schools.

Religious seminaries in Pakistan, especially in Khyber Pakhtunkhwa and the Federally Administered Tribal Area (FATA) along the Afghan border have been blamed by the U.S. for training militants in the mould of the Taliban.

“Taliban means students of religious schools,” said Jawad Khan, political science teacher at the Government College Peshawar. “Towards the mid-nineties, Taliban drawn from Pakistani and Afghan madrassas ran over Kabul, and within weeks were in control of 95 percent of Afghanistan.

“At that time, the U.S. and its staunch ally Pakistan supported the Taliban government in Afghanistan with a view to counter Shia-populated Iran,” he added.

The heads of religious schools vehemently deny charges they are producing militants. “More than 4,500 students study in our school,” said Maulana Samiul Haq, chancellor of Darul Uloom Haqqania, the biggest religious seminary in Pakistan. “All of them are peaceful and apolitical. They had taken part in the fighting just to safeguard Afghanistan against the bitterly divided and corrupt government in Kabul.”

“We are learning ethics, morality and values of humanity,” Fauzia Begum, 18, a student of Jehadul Momineen Darul Uloom in Bannu, one of the 25 districts of Khyber Pakhtunkhwa told IPS. “There is a need to get more female students to religious schools to quell the prevalent wave of terrorism.”