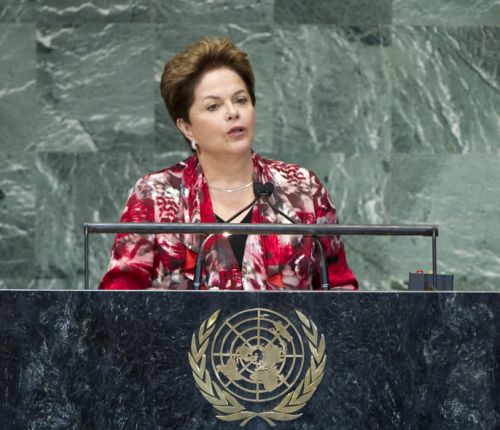 UNITED NATIONS, Nov 8 2012 (IPS) - When a U.N. member state agrees to hold an international conference in its capital, the host country is not only offered the privilege of chairing the mega meeting but also given pride of place as the keynote opening speaker.

But for the last 67 years, since the inception of the United Nations, Brazil has continued to hold the number one slot on opening day of the General Assembly sessions, a position which rightly belongs to the host country, the United States, which remains the second speaker cast in stone.

As a result of this longstanding tradition – with no logical explanation even from the United Nations – President Dilma Rousseff became the first woman, since the founding of the world body, to open the annual high-level debate of world leaders at the General Assembly in September.

She was immediately followed by U.S. President Barack Obama.

Over the last decade, going back to the presidency of Luiz Inacio Lula da Silva ending in 2010, Brazil has participated in nine U.N. peacekeeping missions; hosted important multilateral conferences (in particular the Rio+20 summit last June); actively contributed to discussions on U.N. reform; worked to strengthen the Economic and Social Council (ECOSOC); and encouraged a greater role for the U.N. in the promotion of economic and social development.

Brazil is also a founding member of the 132-member Group of 77, the largest single coalition of developing countries at the United Nations, and is the 10th largest contributor to the U.N.’s regular budget, with 38 million dollars for the latest fiscal year.

Professor Candido Antonio Mendes de Almeida, president of the Forum of Rectors of Rio de Janeiro, told IPS Brazil’s role in the world community is closely linked with the emergence of BRICs, and “out of the classical peripheries and with a growing influence in Africa, especially in the Portuguese-speaking countries”.

“The permanent seat in U.N.’s Security Council will occur as an inevitable consequence,” said Mendes de Almeida, author of over 30 books and secretary-general of the Academy of Latinity.

Along with India, Germany and Japan, Brazil is part of the Group of Four (G-4), and one of the front runners for a permanent seat in the Security Council, outpacing Argentina, another potential contender from Latin America.

“At the same time, a full new Brazilian approach in Latin America appears with the stern condemnation of the coup d’état in Paraguay, a counter play to the anti-American escalade of the Bolivarian states, and a full new bilateral expanding trade with Argentina,” said Mendes de Almeida, who has participated in several international conferences as a Brazilian delegate or a special guest.

The G-4 has continued to work closely to achieve the goal of “a more representative, democratic and transparent Security Council, in line with the current geopolitical realities”.

The Group believes that reform is long overdue and that a longer delay may affect the capacity of the Security Council to deal with new challenges and hinder the effectiveness and legitimacy of its decisions.

“Brazil is confident the reform of the Security Council is perfectly achievable and that a positive result can be obtained in the near future,” a spokesman for the Brazilian Mission to the United Nations told IPS.

“It is our hope the intergovernmental negotiations in the General Assembly (currently underway) will gain momentum in the coming months and that this can lead to concrete results on the main aspects of the reform.”

As a non-permanent member, Brazil has served 10 times on the Security Council.

The largest contributions are to peacekeeping missions in Haiti (1,894 troops) and Lebanon (268 troops).

Although IBSA has been seeking to foster South-South cooperation and strengthen economic and trade relations among developing nations, it played a more active role when all three countries, by a coincidence, served simultaneously as non-permanent members in the Security Council in 2011.

Faced with the unprecedented challenges posed by the Arab Spring, and in the context of global economic crisis, IBSA developed a very close dialogue in the Security Council.

The three countries also articulated a strong common position on the Israeli-Palestinian peace process and the role of the Security Council.

This stance was expressed both in the IBSA Tshwane Declaration (2011) and in the first ever joint-statement delivered by the group in the General Assembly debate in 2011 on the Palestinian question.

On Syria, the IBSA common position in July-August 2011 led to a joint demarche to the Syrian government, based on a clear condemnation of violence against civilians; a call for an end to all violence and true engagement in a meaningful, Syrian-led political dialogue conducive to full respect for human rights and basic freedoms.

As Rousseff told the General Assembly, “There is no military solution to the Syrian crisis. Diplomacy and dialogue are not just our best option: they are the only option.”

While Brazil has moved closer to achieving some of the U.N.’s development goals, including hunger and poverty alleviation, universal primary education, combating HIV/AIDS and environmental sustainability, it has lagged behind in one key goal: gender empowerment.

As a Brazilian diplomat reminded delegates last month, for the first time in the country’s history, a woman president took office. Still, he admitted, women continue to be largely underrepresented in decision-making positions.

Although women make up about 52 percent of all Brazilian voters, only 10 percent of legislators are women. And of the 38 ministries, only 10 are headed by women.

But he assured that Rousseff has made it her priority “to enhance the participation of women in top decision-making levels”.