Q&A: “Developing Countries Are Doing Their Part for Biodiversity”

HYDERABAD, India, Oct 23 2012 (IPS) - Developing countries are investing enormously in preserving biological diversity, and it is unimaginable that the wealthy nations will not fulfill their obligations to provide funding for these efforts, Brazilian environmental negotiator André Aranha Corrêa do Lago told Tierramérica*.

Global awareness on biodiversity is still “much lower than it should be,” despite the fact that the Convention on Biological Diversity has provided “a large amount of scientific information to governments in all countries,” said Corrêa do Lago, director of the Department of Environment and Special Affairs at Brazil’s Ministry of External Relations and senior negotiator of the Brazilian delegation at the 11th meeting of the Conference of the Parties (COP 11) to this international treaty.

Corrêa do Lago spoke with Tierramérica in Hyderabad, a world centre of computing and biotechnology in southern India and the host of COP 11 on Oct. 8-19. 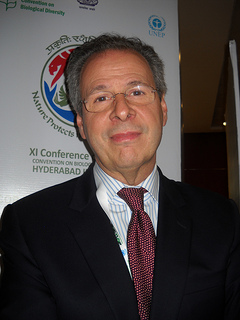 Q: Judging by the results of COP 11, how do you evaluate the state of global awareness on biodiversity?

A: The awareness on biodiversity is much lower than it should be. This convention, however, is helping more than any other initiative to create awareness. It has provided a large amount of scientific information to governments in all countries.

Q: One of the most contentious issues is the lack of financial commitments. What is the solution?

The fact is that biodiversity is globally linked and we cannot isolate it by geographical boundaries.

It is only when biodiversity is incorporated into the development paradigm, seen as an important factor promoting economic, social and environmental sustainability and recognized as relevant to energy, agriculture and so many other human activities, that we can ensure adequate resources are allocated to its preservation.

Q: The parties to the convention have agreed that the impact of biofuels on biodiversity will be taken into account when they develop future energy strategies. The text was welcomed by Brazil, a big producer of ethanol. Why?

A: In Brazil’s experience, biofuels have had an extraordinary impact on development, because they are inexpensive and their technology is not challenging. And this has raised some concerns in many quarters.

However, we have to know more about biofuels, as some are less sustainable than others, and ensure that they are economically, socially and environmentally positive.

At the COP, the parties have agreed that biofuels are extremely important. We must however take into consideration their impact on biodiversity. Brazil supports any step that recognizes that biofuels can be very positive for the energy sector and for sustainable development.

The great news for developing countries is that in tropical countries, biofuels are amazingly profitable, and it is an opportunity we have to use.

Q: Before the Nagoya Protocol was signed, Brazil had put in place national rules for access and benefits-sharing and against biopiracy. But they did not work.

When the Nagoya Protocol enters into effect, and for that we need at least 50 countries to ratify it, we shall have a common internationally recognized platform that will ensure that access and benefit-sharing laws and regulations defined at the national level will be respected, thus providing assurance, stimulating scientific research and preventing biopiracy.

Q: But two years after its adoption, the Nagoya Protocol has only been ratified by six countries, and Brazil is not among them.

A: As the first step, the president (Dilma Rousseff) has already sent it to the congress, where it is being examined at the present time. In Brazil, any ratification of an international agreement is a complex process because it has to go through the congress.

A: I believe certainly by the next COP.

Q: Many conservationists claim the current reform of the Brazilian forest code will hurt the successful efforts by your government to reduce deforestation.

A: The president had to veto the text of the forest code issued by the congress. And this is the second time she has done this. The government is not going to approve a forest code which contradicts the national commitment to the reduction of deforestation.

The current Brazilian forest code is an exceptional legislation that exists nowhere else in the world. To give an idea: in any area in Brazil which is not in the Amazon, owners of land can only use 80 percent of the land, while the rest has to be preserved as natural habitat. Inside the Amazon, it is the reverse – 80 percent has to remain untouched and only 20 percent used.

There is nowhere in the world a legislation so tough on private property in order for an ecosystem like the Amazon to be preserved. The present issue is how we are going to deal with those who have violated it. The new legislation is going to be extremely stringent in dealing with such cases.

The forest code is from 1965 and since then Brazil has become a much more important and complex economy. We need to have a forest code that reflects these realities.

Interestingly, there is a huge public debate on this, but decisions are in the hands of the congress, of persons elected by popular vote. All efforts are focused on convincing the congress to deliver a balanced forest code.

Q: How much funding does Brazil expect from the COP, and what biodiversity issues would it address as a priority?

A: What we have seen at the COP is very clear. Large developing countries like India and Brazil are already investing enormously in preserving biodiversity.

The prime minister of India, Dr. Manmohan Singh, pledged additional resources at the COP so that India can progress towards the Aichi Targets (adopted in 2010 to address the underlying causes of biodiversity loss). This is the utmost demonstration of how developing countries are doing their part.

However, there are other countries that need additional resources to ensure their biodiversity. I cannot imagine that developed countries will not take this into consideration and find solutions to make sure that these countries get adequate funds.

India and Brazil can also do more if there are additional resources. As a priority for spending on biodiversity, Brazil would follow exactly on the lines that Singh mentioned: that countries have to have all the instruments – technology and human capacity building – that enhance biodiversity. It cannot be business as usual.