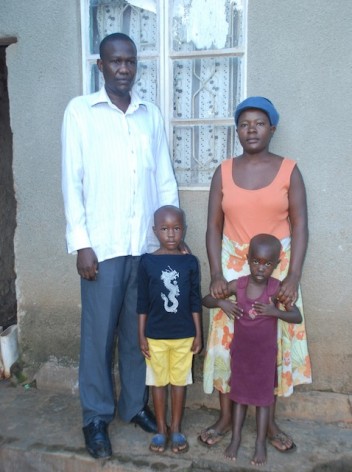 Charles Kayongo, a Ugandan bar owner, and his wife Eunice, have defied traditional beliefs and refuse to have more than two children. Credit: Dennis Kasirye/IPS

KAMPALA, Nov 15 2012 (IPS) - Charles Kayongo of Uganda is a father of two girls aged five and three. And even though age-old traditions among his ethnic group, the Baganda, say a man should have an unlimited number of children and a son as an heir, Kayongo refuses to have more children.

Like a growing number of cash-strapped young parents in this landlocked East African nation who yearn for a modern lifestyle, he says that he and his wife, Eunice Kayongo, want a small family.

“Enough is enough. I do not want any more children. I discussed this with my wife, and we have been using pills and condoms for the past two years. The cost of food, of sending them to school and buying medication is already too high for me,” the 33-year-old tells IPS from his home in Mukono town on the outskirts of Uganda’s capital, Kampala.

Kayongo, who owns a bar, says he spends 10 dollars a day on his family and earns a total of 440 dollars a month.

“I am interested in family planning because it helps us live a better life. I make sure I go with my wife to the clinic. I have to plan financially for my family.”

Uganda has one of the world’s highest population growth rates at an annual rate of 3.2 percent. The country’s total population is currently 34 million.

“One million people are added to the Ugandan population annually, but the resources are not increasing at the same rate,” Anthony Bugembe, a programme officer at the Population Secretariat in the Ministry for Finance, Planning and Economic Development, tells IPS.

Kayongo is among an emerging generation of young Ugandan husbands who are beginning to defy the old African tradition of fathering large numbers of children and are opting for smaller manageable families.

Lynda Birungi, from the national family planning group Reproductive Health Uganda, says more young fathers are becoming involved in family planning than before largely because of financial reasons. However, these men are still a minority.

“Out of every five women who come to our clinic, only one comes with a man. But over 20 years ago, no men came. These days, the young generation of male partners want a better standard of living and feel that they can attain this by having small families,” Birungi says.

Meanwhile, in the southern African nation of Malawi, what started as a travelling theatre of only 10 police officers 11 years ago has now grown to a movement of over a thousand men preaching against gender-based violence, which fuels unwanted pregnancies and increases maternal mortality.

The group, the Men’s Travelling Conference (MTC), is a team of mostly men and some women funded by the Norwegian government and the United Nations Population Fund.

In 2003, the MTC marked the annual 16 Days of Activism Against Gender Violence, an international campaign calling for non-violence against women and children that is held from Nov. 25 to Dec. 10, in a unique way.

Men from Kenya, Zambia and Ethiopia converged on Malawi’s capital Lilongwe after travelling there by bus. Along the way, the men stopped at each community they passed, and left behind the message that violence against women was destructive and that men hold the power and responsibility to stop such violence.

Now every December the MTC travels by bus to various communities in Malawi to educate men. Wisdom Samu is one of the men who travel with the MTC.

In September 2001 he lost his wife shortly after she gave birth to their seventh child.

“Through the MTC, I have learnt that I was to blame. I never allowed her to use family planning methods because I wanted more children,” Samu tells IPS.

Samu has since become a role model and has persuaded many other men from his community of Namitete – situated 50 kilometres outside of Lilongwe – to become involved in family planning.

“I tell them to listen and plan together with their wives, and to allow their wives to use modern family planning methods,” he says.

Samu’s story is echoed across Malawi, a country where 13 women die every day from avoidable pregnancy-related complications.

“It was these scary statistics that made us think outside the box…We agreed to recruit and mobilise male supporters at all levels and sectors to push the agenda through drama, song and discussions to tell men that its time they sat down and planned smaller families with their wives,” Emma Kaliya, chairwoman of Malawi NGO Gender Coordination Network, tells IPS.

As Malawi strives to involve more men in family planning, the West African nation of Mali is slowly but surely making progress.

The country’s Millennium Development Goals report by the U.N. Development Programme in March 2010 said that Mali’s maternal mortality rate had dropped from 582 to 464 deaths per 100,000 live births between 2001 and 2006.

This is partly because of intensive campaigns to involve men in family planning.

“Ten years ago, my clinic in Bamako only used to receive women, but today the women are being accompanied by their husbands and that to me is a sign that what we are doing is working,” says Mountaga Toure, executive director for the Malian Association for the Protection and Promotion of the Family, known by its French acronym as AMPFF. The association is an affiliate of the International Planned Parenthood Federation (IPPF).

“I sometimes see men coming on their own to collect contraceptives for their partners, saying that their wives are too busy to do that,” he tells IPS in a telephonic interview.

This, he says, is a massive change in a deeply Muslim country like Mali.

Toure says that the AMPFF, in partnership with the IPPF, is deliberately encouraging men to talk about what has always been regarded as taboo.

“To make them understand, we talk about the economy and whether it can allow any man to support 10 children … this makes them understand the reason why they need to plan with their wives how many children their pockets can support,” Toure says.

Meanwhile, back in Uganda, Kayongo’s decision not to have more children has not gone down well with his mother.

“My mother wants me to have sons, but I do not want more children. It is my decision,” he says.